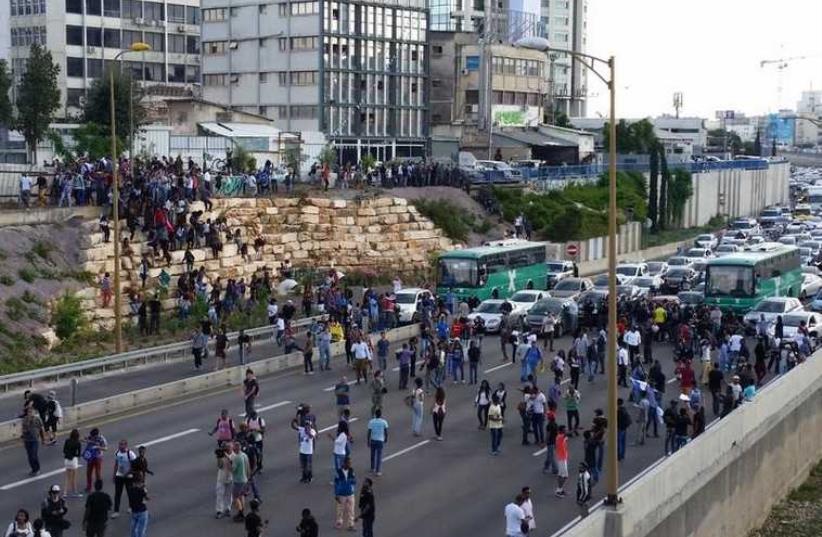 Tel Aviv anti-racist rally
(photo credit: BEN HARTMAN)
Advertisement
A video was the trigger for Thursday’s demonstration by a group of Ethiopian Israelis in Jerusalem, but their pent-up anger runs deep.The video, which went viral last week on social media, shows two police officers assaulting Damas Pakada, 21, for no apparent reason. The impact of the video was amplified by the fact that Pakada was in his IDF uniform: Pakada’s loyalty to the state did not protect him from unprovoked, outrageous police wrath. (Eighty-six percent of Ethiopian males enlisted in the IDF in 2011, compared to a national average of 74%, according to the Knesset Center for Research and Information.) The Israel Police attempted to defuse the situation by publishing a condemnation of the assault. An officer involved was suspended pending an investigation. Nevertheless, more than a thousand protesters – most of them young people of Ethiopian extraction who were born in Israel – arrived outside the Israel Police national headquarters on Thursday to demonstrate. Ostensibly, the protests were against police brutality directed at the Ethiopian community. Pakada was not the first Israeli Ethiopian to have been beaten by police.
See the latest opinion pieces on our page
But the demonstration exposed a much broader frustration with what many Israelis – Ethiopian and not – view as racist discrimination on the basis of skin color.Eighty-five percent of Israelis said that there is either “much” or “moderate” discrimination against Ethiopian students in the education system, according to a survey commissioned in 2013 by Hakol Hinuch [Everything is Education], an organization based at the University of Haifa that provides pro bono legal advice to parents whose children experience discrimination in school.A 2012 survey was so shocking that it prompted the International Fellowship of Christians and Jews and the Jewish Agency, together with Prime Minister Benjamin Netanyahu, to declare a “convention for the integration of Ethiopians into society and the economy and against racism and discrimination.” The survey – conducted by pollster Geocartographica – found that less than half of non-immigrant Israelis would agree to allow their children to be educated with Ethiopians in the same classroom.Only a quarter would be willing to be the neighbor of an Ethiopian or allow their children to marry an Ethiopian.But 82 percent said that Israeli society has to help with the integration of Ethiopian immigrants.According to a 2011 study conducted by the Myers-JDCBrookdale Institute, poverty is four times higher among Ethiopians than among other Jewish Israelis – even when two or more family members work. It found that Ethiopian youngsters are much more likely to drop out of school and are vastly under-represented at universities.One place they are over-represented is in jail. Though they make up just one-fiftieth of the population, onefifth of Ethiopians who serve in the IDF are imprisoned during their military service. Though Ethiopian children represent just 3% of Israeli children, one-fifth of those incarcerated in Ofek Prison for juveniles are Ethiopians, according to the Israel Prisons Service.These are mindboggling figures. Are they the result of discrimination? It is impossible to say.Clearly, Israel is not a “rainbow society” that celebrates its differences. What was once referred to as the secular, Ashkenazi elite continues to harbor condescending, even disparaging, opinions about Sephardim and haredim.Tensions exist between Sephardim and immigrants from the former Soviet Union. Nearly every Israeli Jewish group makes nasty generalizations about Israeli Arabs. And Ethiopians also suffer from Israeli society’s tribalism.At least part of the reason for the government’s reluctance to bring to Israel the remaining 4,000 to 5,000 Ethiopians – many of whom with family in Israel – has to do with the color of their skin. It is hard to imagine prospective Russian immigrants treated in a similar way.It would be unfair, however, to say that political leaders have failed to address the societal ailments suffered by the Ethiopian community. Undoubtedly more can be done.And nothing can excuse egregious police brutality, which, by the way, is also vented against other groups within Israeli society, from haredim and Arabs to left-wing activists.But at least part of the problem facing Ethiopians in Israel is the inescapable difficulty of making the transition from sub-Saharan Africa to an advanced Western country. Hopefully, much of what we are witnessing is growing pains.