Then, as now, the responsibility for implementing this vision was placed entirely on Israel’s shoulders, as the party with “all of the power,” from the dominant European perspective. 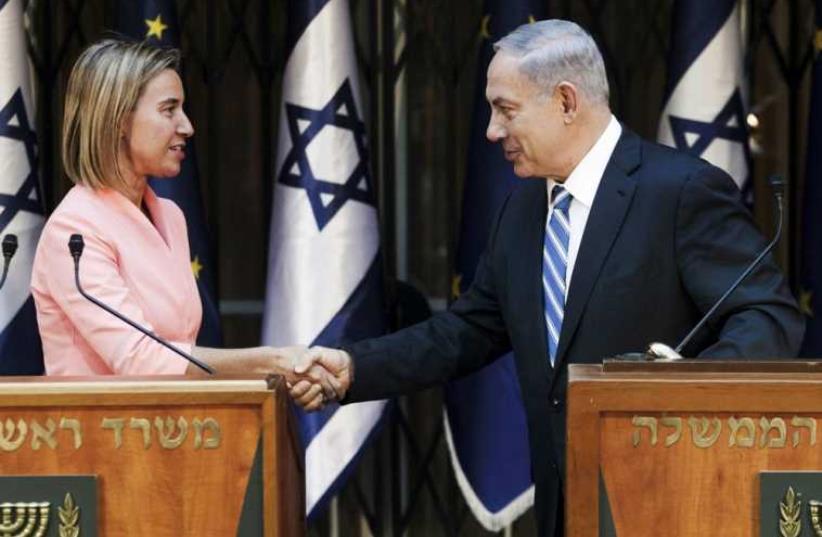 Prime Minister Benjamin Netanyahu hosts European Union foreign policy chief Federica Mogherini in Jerusalem, May 20
(photo credit: REUTERS)
Advertisement
The crisis between Israel and the European Union has been simmering for a long time, and with product labeling (an interpretative note to protect consumers, according to official EU statements), has reached the boiling point. In suspending talks and consultations with the EU, Prime Minister Benjamin Netanyahu has launched a major effort to restructure this broken relationship, and confront core differences over Middle East realities and how to address them.In some ways, the explosion has been building for 35 years, since the proto-EEC’s 1980 Venice Declaration, which called for a solution to the Arab-Israeli conflict based on the creation of a Palestinian state, and ending “the territorial occupation which it has maintained since the conflict of 1967.”Then, as now, the responsibility for implementing this vision was placed entirely on Israel’s shoulders, as the party with “all of the power,” from the dominant European perspective.Palestinians were and are viewed as powerless victims, and policy makers in Venice and after often had a tendency to give little attention to issues such as terrorism, incitement and rejection of the legitimacy of Jewish sovereignty, regardless of borders. An end to occupation and Palestinian statehood would ostensibly resolve these lesser obstacles.Ambassador John Gatt-Rutter, who recently completed a term as head of the EU’s Jerusalem office (the de-facto embassy to the Palestinian Authority), articulated these positions in detail in a lengthy article in the Palestine-Israel Journal (2015), optimistically entitled “The European Union’s Role in Facilitating a Resolution of the Israeli-Palestinian Conflict.” Gatt-Rutter refers to “the Israeli occupation” and “illegal settlements” as the main obstacles to peace, and expresses sympathy for Palestinian victims of violence, but not for Israelis. His map of the Middle East stops at the Jordan River – there is no mention of Islamic State (IS), Syria, Iran and Hezbollah. His advice to the Palestinians is restricted to calling for unity, noting that they “would be well advised to restore their national and democratic project through holding elections.” Ending terrorism and accepting Israeli legitimacy are not part of his or the EU’s agenda.Gatt-Rutter is one of the EU’s core promoters of confrontation with Israel, calling for expanded “lawfare” cases, which are largely funded by the EU through non-governmental organizations (NGOs). His call for economic warfare (also promoted by NGOs) is expressed as “ensuring compliance with legislation covering preferential treatment in the area of trade; restrictions on the use of funding for the benefit of settlements; advice to businesses and investors working in settlements; and settlement product labeling.”Like other EU officials, Gatt-Rutter’s approach, including product labeling (applied uniquely to Israel), only increased the friction with Israel and did not help promote reduction of the conflict. Beyond the discrimination and hostility, they are widely seen as a form of neo-imperialism – an attempt by European bureaucrats to manipulate Israeli democratic processes and debate in order to conform to a very dangerous formula.For all of these reasons, many Israeli government officials and a large part of civil society continue to distrust Europe. But to avoid a break, Israel has periodically accepted some European initiatives, such as the Europe’s EuroMed framework, created in the 1990s to counter American influence after the Oslo agreement, and without substance. Later, Israel also agreed to the formation of the Quartet peace framework, in which the EU held one of the chairs, but their role was again restricted.In parallel, every Israeli activity beyond the pre-1967 lines (what Israelis call “disputed territory”) was condemned as extending the occupation and settlement construction, (“the primary obstacle to peace”) by officials of the European External Action Service (EEAS) in Brussels and in the foreign ministries of many of the EU member states.In this process, institutions and careers have been developed around the European framework of a “Middle East Peace Process” (MEPP), in which the images and formulas of the 1970s remain unchallenged. (The very term MEPP is clearly inappropriate given the numerous conflicts raging in the Middle East.) Tens of millions of Euros are spent by the EU and members states every year in support of their MEPP scenarios, including funding for dozens of NGOs that promote and reinforce the European images and policies, almost entirely directed at Israel. For over 30 years, every Israeli response to terror draws an automatic condemnation, adding to the anger. Israeli critics, including politicians, also noted that none of the EU actions or the NGO funding which is provided to promote the MEPP focused on changing Palestinian policies or attitudes.In this context, measures such as product labeling that increase the cost of the status quo and the Israeli occupation are counterproductive.They are supported by a strong lobby both within the EEAS and other branches of the EU, as well as by officials from other governments, and by closely affiliated NGOs.It was the Israeli anger at discriminatory product labeling (the EU does not apply this sanction in any other territorial dispute), including the patronizing way it was presented by EU officials that led Prime Minister Netanyahu to suspend official diplomatic discussions with EU officials and institutions. This is a wake-up call designed to convey the Israeli response through a symbolic move, suspending diplomatic contacts that are largely symbolic and devoid of content.Netanyahu’s move is also an opportunity for Frederica Mogherini, the EU’s new foreign policy czar, to finally move away from the long history of European myths, paternalism and confrontations with Israel and launch a positive approach. New people, brought by Mogherini to the EU foreign policy framework, are not wedded to the mistakes of the past 35 years, since Venice. A serious reappraisal will mean moving away from the Palestinian victimization narrative, and the demonization of Israel that has done so much damage in Europe.The author is a professor of political science at Bar-Ilan University and president of NGO Monitor, a Jerusalem-based research institute.