Appointing a woman for the first time to head the Jewish Agency would be a reflection of what is happening in the Jewish world both in Israel and in the Diaspora. 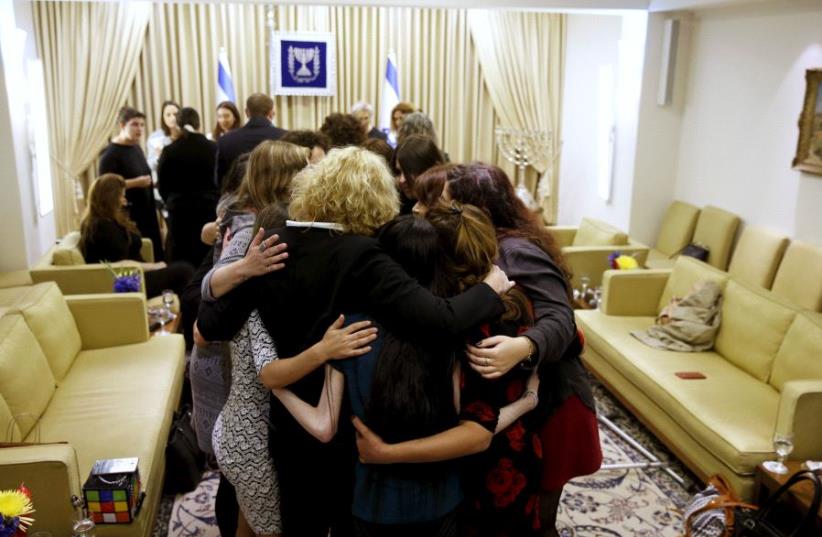 Women who took part in a project ahead of International Women's Day (marked on March 8), hug during a meeting with Nechama Rivlin (not pictured), wife of Israeli President Reuven Rivlin in JerusalemDay
(photo credit: REUTERS)
Advertisement
In relations between Israeli and American Jews – at least according to stereotypical presentations – there is no confusing the liberals from the conservatives.Both in outlook and in practice, Israelis are the ones said to be committed to tradition and particularism while American Jews are perceived as progressive and universalistic. The crisis over the creation of a gender- egalitarian prayer space at the Western Wall is demonstrative of this dichotomy.That’s why it was interesting to see the tables turned this week over the appointment of a new Jewish Agency Chairman.Thanks to a scoop by Gil Hoffman, The Jerusalem Post’s chief political correspondent, it emerged that American Jewish leaders presented Prime Minister Benjamin Netanyahu with a male-only lineup of candidates to replace current Chairman Natan Sharansky, suddenly it was the Israeli side championing the cause of gender egalitarianism while it was the Americans who looked surprisingly out of touch with the times.In an age in which the #metoo campaign is radically changing old concepts of male-female power relations, how could the American heads of the agency and its associated institutions fail to include at least one female among the six candidates they deem worthy to succeed Sharansky?“I saw the list,” Yesh Atid leader Yair Lapid said during a meeting of his Knesset faction Monday, “and even in this room there are those who are no less qualified. To present only men to lead the Jewish world in 2017 proves that they don’t understand the Jewish world.”Zionist Union MK Merav Michaeli said it should have been obvious to the American Jewish leaders that they were neglecting half the population.“It’s about equal opportunity, and realizing that you have to share power, resources and decision-making,” she said. “There are many extremely accomplished, talented women.”Ideal candidates should be intimately familiar with Diaspora Jewry, particularly American Jewry, and have good relations with Netanyahu. There is no dearth of quality female candidates who are on par with Energy Minister Yuval Steinitz, opposition leader Isaac Herzog, Zionist Union MK Nachman Shai, Consul- General in New York Dani Dayan, Ambassador to the US Ron Dermer, and former ambassador to the United Nations Ron Prosor -- all of whom appear on the list.Appointing a woman for the first time to head the Jewish Agency would be a reflection of what is happening in the Jewish world both in Israel and in the Diaspora. Increasingly, women have been taking a more prominent role in Jewish leadership, while men’s involvement has declined. This is particularly true in the liberal streams of Judaism.In 2008 Brandeis University professor Sylvia Barack Fishman coauthored a monograph entitled Matrilineal Ascent/Patrilineal Descent based on survey data and her own interviews. On a range of metrics, she found men to be less invested in their religious identity and less active in synagogue life than Jewish women.A similar, though less pronounced trend, can be found in Orthodoxy as well. The “Nishma Research Profile of American Modern Orthodox Jews” -- the first of its kind -- found widespread support for women serving as synagogue presidents. There was also almost unanimous support for women learning Torah on an equal intellectual level to men. Half even thought that women should have “expanded roles in the clergy.”A woman head of the Jewish Agency would not only reflect these trends but would also be uniquely positioned to take advantage of emphasizing women’s increasingly dominant role in forming Jewish identity, particularly in faith communities.It’s rare to see Israelis criticizing their American brothers and sisters for failing to live up to liberal ideals of gender equality. Undoubtedly, there is a large number of American Jews who accept this criticism wholeheartedly.The appointment of a new head to the Jewish Agency presents an opportunity. Choosing a woman for the job could be a unifying event that brings together the world’s two largest Jewish communities and presents a model for feminine Jewish leadership in the 21st century.