Fighting BDS by reaching out to the Christian community

The Israel advocacy strategy would not be complete without including the next generation of Christians as well. 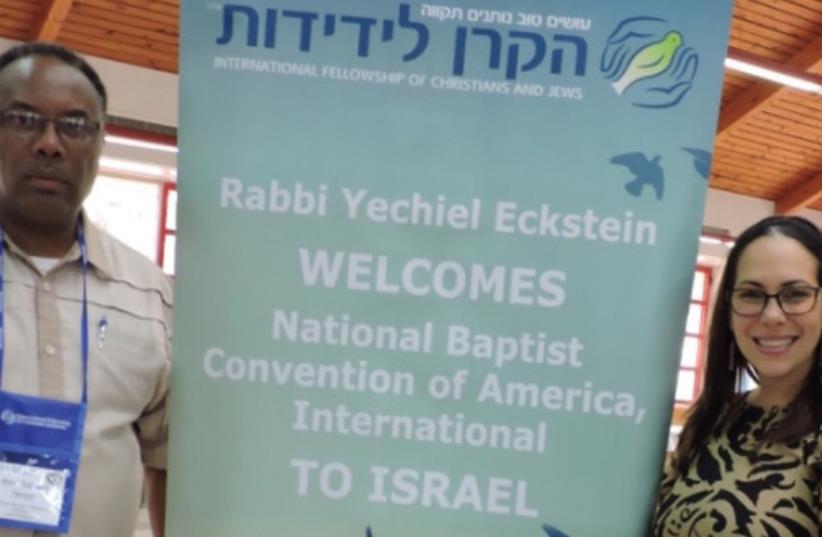 BLACK PASTORS meet with Yael Eckstein at the Caesarea Aqueducts
(photo credit: Courtesy)
Advertisement
As I roamed around the Caesarea aqueducts with a group of African American pastors, I noticed that people had stopped to stare. Not in anger, but confusion. Finally, a middle-aged Israeli came up to me to ask the question on everyone’s mind.“I never knew African American Christians were that interested in Israel,” he said.“You’re correct,” I responded. “They don’t know much about us; they came to learn.”You see, more than 30 years ago in Chicago, my father, Rabbi Yechiel Eckstein, had a radical vision. He dreamed about educating and working with Evangelical Christians to foster a respect for and understanding of Israel and the Jewish people. Most of the Jewish community thought this was absurd and impossible. My father was ostracized and labeled a traitor. Yet God saw otherwise and transformed his dream into reality.Today, in a historic turn of events, being an American Evangelical Christian is nearly synonymous with being pro-Israel. Christians make up the bulk of Israel’s tourism market and support us in nearly every way possible: financially, politically and spiritually. Today, one would have to be blind to say that this strategic friendship isn’t in the best interest of Israel and the Jewish people.But the Jewish community has yet to fully embrace our unwavering Christian friends. Instead, they have reached a “cold peace” with them, accepting their support while ignoring nearly every other aspect of the relationship.Meanwhile, the anti-Israel Boycott, Divestment, Sanctions movement is still growing. And the Jewish world is pouring millions of dollars into combating this threat, while seeing few results.As progressive Americans who believe in education and liberal values, the Jewish community is reaching out to college kids, intellectuals and young hipsters at all four corners of the American map. “We’re right, and with a little investment in educating them they will see!” is the feeling many American Jews have, yearning for this community of like-minded individuals on nearly every domestic issue to finally “see the light” when it comes to Israel. But, time after time, we’re proven wrong. The BDS crowd is not seeing the light; the darkness is only growing.And, I believe, it’s because we’re reaching out to the wrong people.BDS is trailblazing its way across liberal American campuses, leaving Israeli flags covered in dust. “Lies get halfway around the world before truth even puts on its shoes,” many people have said, and this is exactly correct. Once young people fall into the black hole of BDS, there is little chance to get them back.But there is hope. If we stop targeting those already exposed to BDS and radical left-wing liberals, we might have a chance to succeed. But that means coming face to face with what is still regarded as the “C-word” in many traditional Jewish households: Christians.While The International Fellowship of Christians and Jews has already deployed millions of Christians in support of Israel, this support is a drop in the bucket compared to what we could achieve if we stood together as a Jewish community. Think of the number of people we could reach if we truly extended our hands in friendship to the millions of Christians who are not yet educated on Israel. Reaching out doesn’t mean we need to agree with the Christian community on domestic American issues. It means that we need to respect our differences, and focus our energy on developing a stronger bond on what should be the most important issue to America’s Jewish community: Israel’s safety.Yes, this might come as an epiphany to many, but it’s as clear as day. The Christian community should be the prime target of our anti-BDS efforts, because in that community we actually have a chance to succeed.In the past year, the IFCJ has been expanding its outreach with great success. Our goal is not fund-raising, or even creating political support for Israel, though surely both of those things will come in time from our efforts. Rather, our goal is to plant the seed of truth and facts about Israel before the lies and conspiracy theories infiltrate. We are reaching out to Christian communities who are neither pro- nor anti-Israel to educate them about what Israel really is: a just, moral, progressive, innovative, tolerant nation.For those who have not yet been infected by anti-Israel lies, the facts will speak for themselves.Amazingly, before this outreach to the top leaders of the African-American Christian community, which comprises over 10 percent of American citizens, Israel was a non-issue for them. Yet after leadership tours to Israel, seminars, and reaching out an authentic hand in friendship, they are passionately taking up our cause.And the same outreach is being done in Christian communities around the world in places like Latin America, Korea and Australia.There are more than two billion Christians in the world today, and that number is growing quickly. What I have seen is that every Christian has the potential to be a friend of the Jewish people, if we invest a little energy into reaching out to them.Huge amounts of money are being invested by the American community into new ways to stop the anti-BDS efforts, but if we stopped to assess, we would see that an effective strategy has already been produced and proven.And if we band together to further these efforts of reaching out to the next generation of Christians, we will see tangible results which up until now have only been a dream.We should continue strengthening Jewish students on campus and educating American students who are open to hearing about Israel, but the Israel advocacy strategy would not be complete without including the next generation of Christians as well.

The author is senior vice president of the International Fellowship of Christians and Jews. www.ifcj.org