Israel and Russia need to keep on good terms to make certain the region does not spiral into crisis. 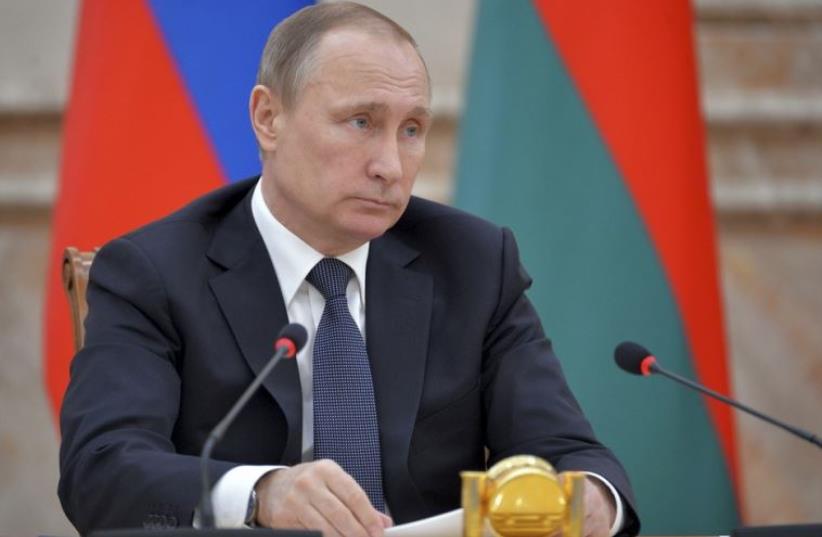 Russian President Vladimir Putin
(photo credit: REUTERS)
Advertisement
Russian President Vladimir Putin is a world-class master when it comes to getting what he wants. He leaves nothing to chance.Putin has created a series of summits in Moscow with one goal in mind: to cement Russia’s role in the Middle East and to delineate the roles of other nations, insuring that there be no unintended conflict between parties.Prime Minister Benjamin Netanyahu traveled to Moscow last Thursday for a public, much heralded face-to-face summit with Putin. On Friday, Putin convened another summit. This one was much quieter, yet once again face-to-face, with Turkish President Recep Tayyip Erdogan. Putin covered much of the same ground with Erdogan as he did with Netanyahu. Islamic State (ISIS), Iran, Syria, terrorism and borders were the main topics. But there were several important differences.Both Israel and Turkey are regional players and Russia wants to make certain that they are all on the same page with regard to ISIS. He also wants to make certain that there is agreement on Syria’s President Bashar Assad – in other words, he wants to make sure that everyone is on his page.Israel says it doesn’t care about Syrian leadership – all it wants is stability and for Iran to be kept as far away as possible. Turkey wants its border quiet and the ability to cross over borders when needed to pursue and punish terrorists. They want freedom to operate in Syria and even to station troops there when necessary.Netanyahu already has an agreement with Putin that allows Israel free access to Syria.THE ISRAELI agreement was hammered out almost a year ago, on the eve of Passover, and was precipitated by a near crisis: Russian MiGs locked on to Israeli fighter jets. Israel did not respond militarily, choosing instead a diplomatic response. On arguably one of the busiest days on the Jewish calendar, Netanyahu took his military aides and jumped on a plane for a halfday visit in Moscow. Putin claimed no knowledge of the incident. He said he gave no permission and will never give permission for his troops to engage Israel – not in the air, on land or on the sea. He stipulated that he receive prior notice before an Israeli operation and promised not to pass that intel on to anyone. Conflict with Israel is not in Moscow’s interest.A Russian/Israeli dogfight would be a crapshoot. Putin does not gamble, he needs to always know the outcome.In this case, there is strong possibility that Russia would lose and that loss would be a tremendous blow to Russia’s power in the region. The results could cascade into a colossal failure in Russian Middle East strategy. They would lose face just as they are gaining power. A loss to an Israeli jet could not be chalked up to luck or technical problems as is common when ISIS scores a victory. It could only mean that Israel is the superior fighting force in the region. Russia would lose face.Israel and Russia need to keep on good terms to make certain the region does not spiral into crisis.Turkey wants the same level of cooperation.It wants the same freedom of operation. That will not happen. Russia and Turkey are talking – but there is much distrust. Putin thinks Turkey has an exaggerated sense of its own power. Turkey has challenged Russia numerous times, including downing a Russian plane, an incident that ruptured the relationship between the two countries until Turkey begged forgiveness.When Netanyahu goes to Putin, he shows great respect for the Russian president. In return, he gets respect.Netanyahu also approaches Russia with caution and with the knowledge that Putin, and Putin alone, determines Russian policy.Contrast that with Netanyahu’s approach to the US. After the first meeting between president Bill Clinton and Netanyahu, Clinton remarked how shocked he was after meeting the Israeli.He said Netanyahu was so cocky that he was confused as to who was the leader of the free world. Netanyahu knows where power lies in the US. He has great support on both sides of the congressional aisle and among donors from both parties. He enters the White House knowing that he has leverage.Not so in Russia.During both summits everyone agreed on ISIS and Syria. The two elephants in the room were US President Donald Trump and Iran. No one wants Iran in Syria. And Iran still supports Hezbollah and has significant troops and advisers there to defend Assad and keep him in power. Iranian and Hezbollah forces are the front line in Syria, keeping it from descending further in to crisis. While Iran and Hezbollah prevent Syria from being controlled by ISIS or al-Qaida, Russia is there to control and manage the situation.Putin and his Russia have the power. For now, Israel and Turkey are content to follow Russia. It’s the smart thing to do.The author is a political commentator. He hosts the TV show Thinking Out Loud on JBS TV. Follow him on Twitter @MicahHalpern.