The question is whether every minister will be ultimately responsible for improving the lives of some set of Israel’s citizens in some clear way. 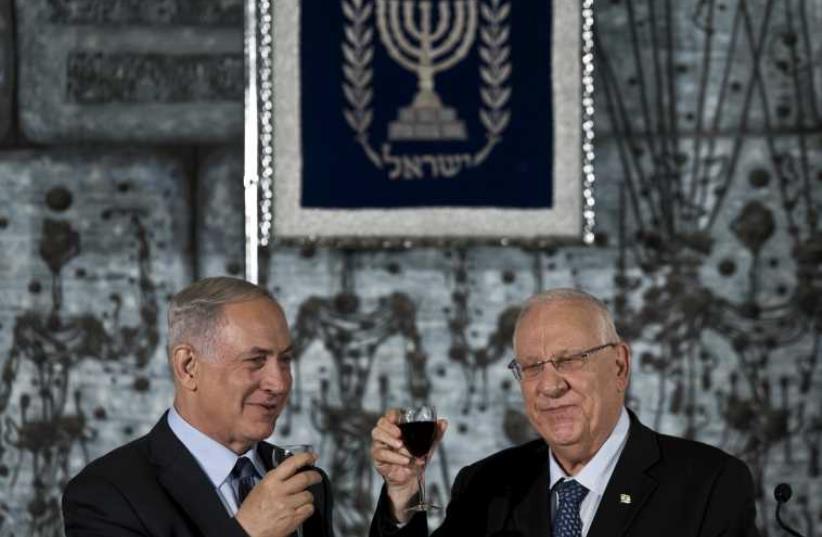 President Rivlin toasts with Prime Minister Netanyahu before a group photo with new government, in Jerusalem
(photo credit: REUTERS)
Advertisement
Opposition parties have railed against the new government’s intention to raise the number of ministers. They decry the bloated budgets required in order to pacify the bloated egos of MKs: extra luxury cars and extra secretaries just to make people feel more important.But if we could put polemics aside for just a breath, we might realize that this could be money well spent. The problem is not whether the country has 18 ministers or 22. The question is whether every minister will be ultimately responsible for improving the lives of some set of Israel’s citizens in some clear way.In this, Yesh Atid chairman Yair Lapid is right: a minister without portfolio is essentially a form of under-employment for an especially lazy politician. Worse yet, it demonstrates a lack of creativity on Prime Minister Benjamin Netanyahu’s part. He could give such ministers real jobs that could make a difference, even with a limited budget.For instance, Netanyahu could appoint Likud MK Avraham Naguise to be responsible for addressing the grievances of Ethiopian immigrants and helping them achieve full equality in our society. Or Likud MK Ayoub Kara to do the same for the various Arab-speaking communities (Druse, Beduin, Muslims and Christians).
See the latest opinion pieces on our page
In South Korea, they have a Ministry of Gender Equality and Family. There have been way too many scandals lately regarding sexual harassment and discrimination for us to doubt that we, too, could benefit from one of those.India has a Ministry of Consumer Affairs. Just imagine if instead of having to suffer endless TV Channel 2 stories about how everything is always cheaper elsewhere, we were to actually appoint a minister whose sole focus was to change all that.The UK has a minister in charge of “Business, Innovation and Skills” – which reflects a clear understanding of what governments must do if they are going to help their people prosper in an ever-increasingly globalized economy.Australia has a minister of small business and India has one for “micro, small and medium enterprises.” This could be especially welcome here. Not only does small business usually account for most of the employment in the private sector, but in Israel they face enormous challenges.The same principle holds true for deputy ministers. The energy and water minister has a great deal on his plate. What if there was a deputy minister for climate change and encouraging renewable energy? Now there’s a business card we could all be proud of.Of course, for any ministry to be very successful, it needs a large budget. But this does not mean a minister cannot be modestly successful on a shoe-string budget.The late Uri Orbach demonstrated this well in the last government as minister of pensioner affairs. Despite having a budget of only NIS 56 million in 2013, he created all sorts of programs which sought to have a meaningful impact on improving the day-to-day lives of Israel’s elderly.In the best case, this is what extra ministers could give us. Tasking a minister with one small, very clear set of priorities allows for focus. It means that the minister can understand the entirety of the problems that ministry faces, figure out innovative solutions, and be the sole person responsible for seeing through the implementation of those solutions.At present, we have reason to be concerned that more ministers will just mean more wasted tax money. But it need not be the case. If done well, Netanyahu has it within his power to turn this political disaster into a triumph. By giving each additional minister a small, clearly defined purview, we could even end up with not just better government, but ironically, potentially even more efficient governance.The author is a post-doctoral Research Fellow at the Leonard Davis Institute for International Relations of the Hebrew University of Jerusalem.