France is undermining the various reciprocal commitments between the Palestinian leadership and Israel. 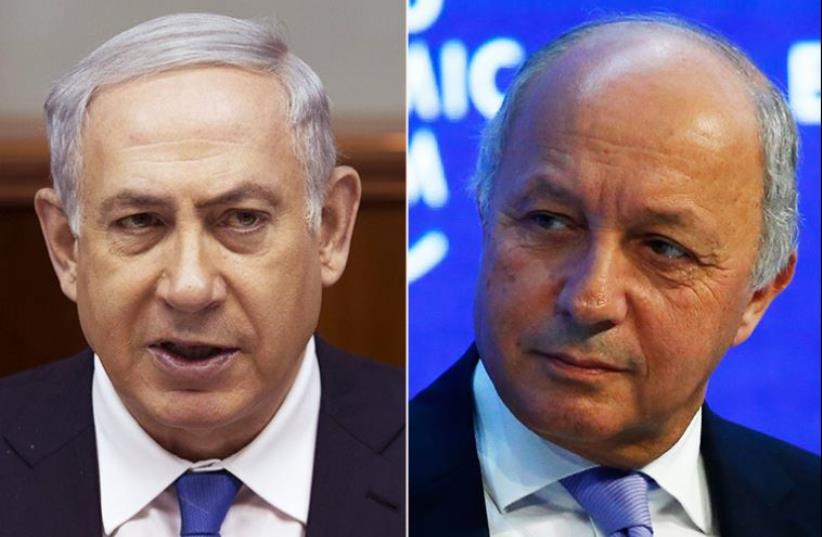 Netanyahu and Fabius
(photo credit: REUTERS)
Advertisement
On January 28, 2016, France’s Foreign Minister Laurent Fabius, in a statement issued after meeting with the head of the Palestinian Authority, Mahmoud Abbas, voiced a somewhat curious and ominous warning and threat, directed solely against Israel, that if imminent efforts being organized by France to end the deadlock in peace talks between Israelis and Palestinians end without result, France intends to “live up to our responsibilities as a permanent member of the UN Security Council and recognize a Palestinian state.”This curious, unprecedented and biased ultimatum raises some pertinent legal and diplomatic questions regarding France’s capacity and standing, both in the context of the Israel-Arab peace process, as well as regarding France’s “responsibilities” as a permanent member of the UNSC.France, as a leading member of the EU, is party to the EU’s signature, as witness, to the 1995 Israeli-Palestinian Interim Agreement on the West Bank and the Gaza Strip. This agreement constitutes the internationally acknowledged backbone of the Israeli-Palestinian peace process.The commitments set down in this agreement, to negotiate the permanent status of the territories, as well as other central issues such as Jerusalem, borders, settlements and refugees, are solemn Palestinian and Israeli obligations which France, together with its EU partners, as well as the US, Russia, Egypt, Jordan and Norway are obligated to honor, after placing their signatures on the agreement as witnesses.By the same token the UN General Assembly, in its resolution A/50/21 of December 4, 1995, supported by France, expressed its full support for the Oslo Accords and the peace negotiation process.In its capacity both as a signed witness to the agreement, as well as a permanent member of the UNSC, it is incumbent on France, which voted in favor of the UN resolution endorsing the agreement and the negotiation process, not to attempt to undermine the same agreement and process, nor to prejudge issues that are still open, negotiation issues.In threatening to unilaterally and arbitrarily recognize a Palestinian state, France is clearly prejudging the issue of the permanent status of the territory, which, as set out in the agreement itself, is a negotiating issue yet to be resolved. In this context, France and its European colleagues cannot and should not act to undermine the Palestinian obligation set out in the Final Clauses of the agreement, according to which no step will be taken to “change the status of the West Bank and Gaza Strip pending the outcome of the permanent status negotiations.”Thus, in acting to unilaterally organize an “international conference bringing together the parties and their main partners, American, European, Arab, notably to preserve and make happen the solution of two states,” France is attempting both to bypass and to undermine a negotiating process called for by the UN in several resolutions since 1967, all supported and endorsed by France.France is also undermining the various reciprocal commitments between the Palestinian leadership and Israel, including a letter from Yasser Arafat to Yitzhak Rabin dated September 9, 1993, in which Arafat declared that “all outstanding issues relating to the permanent status will be resolved through negotiations.”As such, by engaging in a parallel, un-agreed process with the declared aim of imposing upon one side – Israel – the outcome of an international conference, France is, in fact acting ultra vires all accepted norms and principles of conflict resolution. Since all the agreed issues between Israel and the Palestinians including borders between them, Jerusalem, settlements, refugees, security and cooperation, as well as the permanent status of the territory, require reciprocal negotiation, France cannot deceive itself, and the international community, into believing that these issues can be imposed arbitrarily by any conference or international or regional organization.In imposing its ultimatum and threat to unilaterally recognize a Palestinian state should France’s efforts to “make happen the solution of two states” fail, France is, in effect, granting the Palestinian side the prerogative not to engage in any bona fide negotiations with Israel, knowing that, in any event, France will unilaterally grant the Palestinians what they are demanding.As such this statement by France’s foreign minister would appear to be the very antithesis of what is to be expected of a respected and responsible permanent member of the Security Council that claims that it is, and presumes to “live up to its responsibilities as a permanent member of the Security Council.”In view of these considerations, France is urged to reconsider this damaging position.The author is a lawyer, former ambassador and a Director of the Institute for Contemporary Affairs at the Jerusalem Center for Public Affairs.