Free will and infinite love – Shavuot

The historical and biblical narrative Israel is commemorating by celebrating Shavuot. 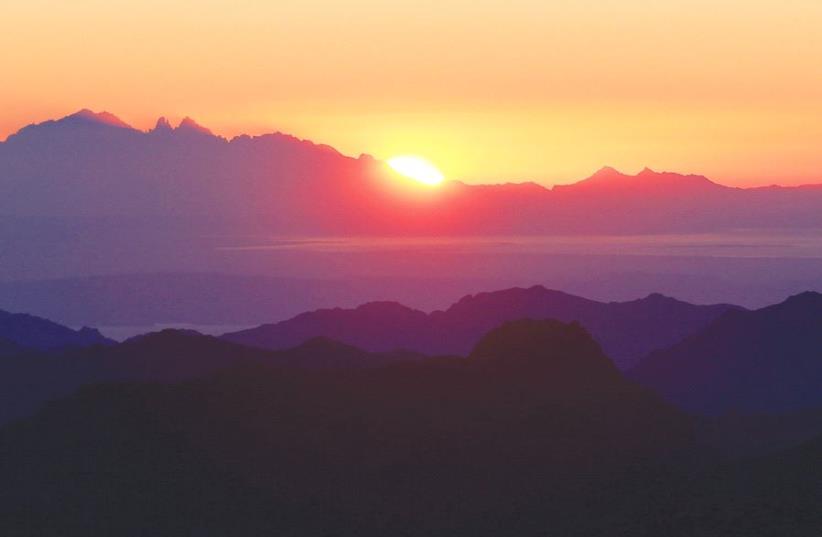 ‘MOSES CAME down from the mountain, turned to the nation and presented God’s offer.’
(photo credit: REUTERS)
Advertisement
This coming Tuesday evening, the Jewish nation will celebrate Shavuot – the holiday commemorating the time when our Torah was given. On this great day more than 3,300 years ago, the nation that had just been liberated from Egypt stood at the foot of Mount Sinai and heard the Ten Commandments – the foundation of all the Torah’s commandments.Six days earlier, the nation had arrived at Mount Sinai and set up camp. As they reached their destination, their leader, Moses, ascended Mount Sinai. There, God made him an offer directed at the entire nation; a dramatic proposal unknown in history until then, to enter into a covenant between God and the Jewish People: “And now, if you obey Me and keep My covenant, you shall be to Me a treasure out of all peoples... And you shall be to Me a kingdom of princes and a holy nation.”(Exodus 19, 5-6) With this proposal in hand, Moses came down from the mountain, turned to the nation and presented God’s offer. The nation, fully comprehending the magnitude of the event, answered in the affirmative.The Torah’s description emphasizes that the positive response was indisputable: “And all the people replied in unison and said, ‘All that the Lord has spoken we shall do!’” They could have refused, but freely chose to enter into a covenant with God, one whose practical implications means the fulfillment of the commandments, following God’s path, and “Tikkun Olam,” repairing the world with the values of justice and holiness.Surprisingly, when the sages of the Talmud discussed this proposal, they saw things very differently. Apparently, they did not see the nation’s free will manifested in its answer. Rather, they find quite the opposite: “This teaches us that the Holy One, blessed be He, overturned the mountain upon them like an [inverted] cask, and said to them, ‘If you accept the Torah, this is good; if not – there shall be your burial.’” (Babylonian Talmud, Tractate Shabbat, page 88) Thus, with a clear and present threat that left no alternative, God gave the nation this greatest of gifts? Beside the issue of how this fits in with the verses we just read that clearly show the nation answering with free will, this raises an even more difficult question: What value and what significance is there to a Torah that was forced upon the nation? Is this how God wanted to act? This question disturbed many Jewish sages, in the Talmudic discourse itself and during the thousands of years since, and there have been a great many varied answers.Two sages from different generations and different cultures solved this riddle in a way that is significant to the understanding of this covenant between God and the Jewish People. The two were Rabbi Yosef Kimchi (a linguist and biblical commentator in Spain and France in the 12th century) and Rabbi Pinchas Horwitz (a rabbi and arbiter of Jewish law, among the leaders of the Hassidic movement in Germany in the 18th century).They suggested reading the words of the Talmud differently.In their opinion, the coercion described in the Talmud did not come in place of the free will described in the Torah, but rather occurred simultaneously with it. There is no conflict, they claimed, but rather two descriptions of two processes that took place.But based on this suggestion, we have a different question to ponder: if indeed the nation chose to receive the Torah of its own free will, why was the coercion necessary? What would have been lacking had the Torah been given without that coercion? These two important commentators answered these questions as follows: there are two kinds of love. There is love between people that leads each to want to fulfill the desires of the other wholeheartedly. And there is a different kind of love, such as that of parents for a child, which leads them to worry about his wellbeing. How are these two kinds of love different? The difference is obvious: when a person wants to fulfill the desires of another, he takes the other person’s wants into consideration.Even if he thinks the other would be better off not getting what he wants, he will still consider those desires valid.This is not the way the love of a parent for a child works. When a parent thinks something would benefit his child, he prefers that the child understand this and agree to do whatever the action is. But what if the child doesn’t agree? What if the child is not mature enough and wants to do something harmful? A devoted parent will not give in and will not stand by as he watches his child deteriorate. On the contrary, he will make every effort, including doing things his child may not like, to make sure the child ends up on the straight and beneficial path.When God came with a proposal to the Nation of Israel to receive the Torah, they wholeheartedly agreed.But God wanted to convey another message as well: I love you so much, I am so concerned about you, that even if you had not agreed, I would not have given in. I would not have stood by and calmly watched you fail.This message is conveyed through symbolic coercion that wasn’t actually necessary. You agreed, He said to them, but even if you hadn’t – I would not have given up on you or on the wonderful role I want you to fulfill in this world: to be a “kingdom of princes and a holy nation.”The author is rabbi of the Western Wall and Holy Sites.