From public to private life: An ambassador reinvented

Like Israel, modern Canada is a nation of immigrants and refugees. 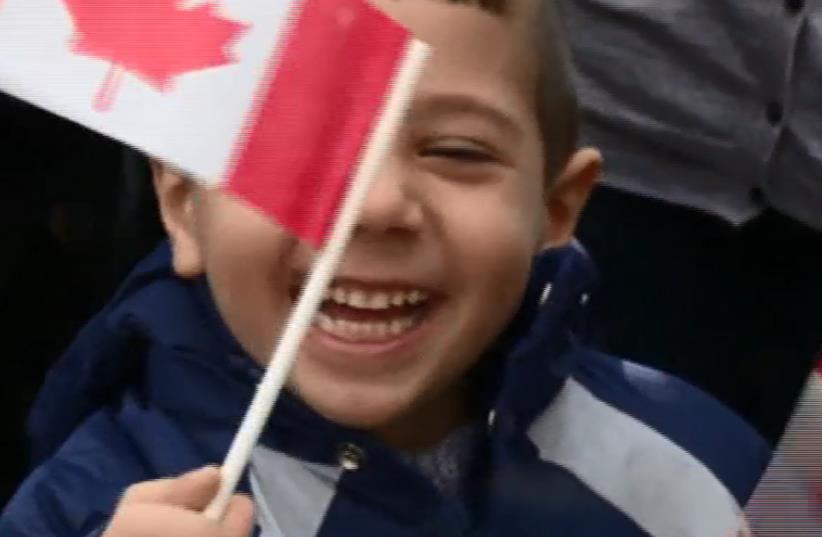 A Syrian refugee boy waves a Canadian flag as he settles into his new home in Canada, December 11, 2015.
(photo credit: REUTERS)
Advertisement
Almost three years ago, in January, former Canadian prime minister Stephen Harper appointed me ambassador to Israel, indescribably changing my life and that of my family. I very proudly represented Canada in Israel until the end of June.Today, with one of my daughters, I begin again. For the time being, we have decided to remain in Israel, fulfilling personal commitments made and adjusting to very different life circumstances. Among other professional endeavors, I will be writing monthly here, and wanted to take this opportunity to introduce myself to new readers with whom I look forward to engaging.I was extremely fortunate to have the honor of representing “[my] home and native land” (as we sing in the Canadian national anthem) in Israel, a country with which I have had strong ties all my life. The two countries share many attributes, foremost among them the fundamental values of freedom, democracy and equality. They could also not be more different; in size, geography, climate and geopolitical circumstance.Like Israel, modern Canada is a nation of immigrants and refugees, my family being no exception. My maternal grandparents fled Russia shortly after the Bolshevik revolution.My father arrived as a refugee from Europe in 1949.They worked hard, overcame unimaginable obstacles, integrated well and raised generations of Canadian patriots.As a nation, we Canadians are accurately stereotyped as being polite and tolerant. Our landscape is vast and varied and the envy of Israel. A joke I have heard many times since arriving tells of Moses receiving a command from God at Mount Sinai to lead his people to Canada.However, when he descended and delivered the message to the assembled throng, his stutter caused him to say: “We must go and live in Ca’anan,” the ancient land, a part of which now constitutes modern Israel.Such humor leavens the indomitable determination and pragmatism underlying the progress of this tiny country since 1948. On a recent visit, my brother, who had not been here since the summer of 1967, was astonished. In his youth, he had visited a traumatized country, immediately following the Six Day War, with a basic, challenged, controlled, agrarian economy. He also met our paternal grandmother, living in difficult conditions in state housing in Afula, resettled from Romania in the early ‘60s. No language could bridge the impossibly different worlds from which they came.When here last year, he was amazed by how beautiful, modern and diverse Israel had become. The pace of change and advances in Israel in recent decades is not, in my experience, as well understood in North America as it might be.As ambassador, I was often asked by visitors: “What is it like living here?” My preferred response was always by way of anecdote: Last year, I spent a day at the National Police Academy campus in Beit Shemesh, where all officers are trained.Part of the program prepared for me involved a group of Krav Maga instructors who demonstrated their unique skill in managing crime through modified martial arts.Once finished, the lead instructor invited questions.“With thousands of years of established practice, and with all the challenges facing such a young state” I asked him, “why was there a perceived need to ‘reinvent’ martial arts?” “We don’t waste time on show moves and fancy high kicks,” he explained. “We just get the job done.”His comment very poignantly distilled the essence of “what makes” Israel, and is an observation that I often share when asked about the business and social culture in this country. There is a level of urgency and focus that is singular, borne of circumstance. People get the job done.These positive comments do not in any way reflect obliviousness to the extreme challenges facing Israel; security and the conflict with the Palestinians and in the region being uppermost in mind. Going forward, I will address pithy topics in which I have particular expertise, among them growing antisemitism, delegitimization and the boycott movement, which is a symptom of the former.Canada has consistently been a moral exemplar, domestically and internationally, against the increasingly vociferous delegitimization of Israel, antisemitism and, in particular, the actions and momentum of the boycott movement in Europe and elsewhere. This moral fortitude and leadership are deeply appreciated in Israel.In closing, I salute His Excellency David Johnson, the first Canadian Governor General (head of state) to visit Israel. He arrived Tuesday for a whirlwind visit, celebrating the close ties between Canada and Israel and encouraging increased collaboration in commerce, academia and all aspects of national life. His excellent opinion piece published yesterday in this paper addressed many of the ideas I had intended to introduce.It was an honor to have been “scooped” in my debut column by the Canadian head of state. Welcome to Israel, governor general.The author is the former Canadian ambassador in Israel, entrepreneur, lawyer, adjunct professor and writer. She resides in Tel Aviv.