Fundamentally Freund: Patrons of Jerusalem: From Montefiore to Moskowitz

The Moskowitz legacy can be seen in the hundreds of Jewish children who now live and play in eastern Jerusalem neighborhoods whose reclamation he championed. 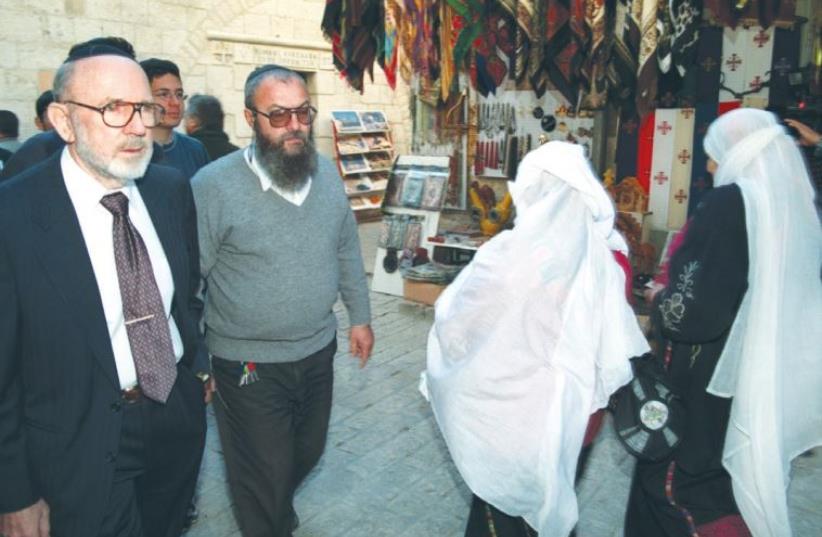 IRVING MOSKOWITZ (left) walks along the Via Dolorosa in Jerusalem’s Old City in 1999. Moskowitz, who died Thursday at age 88, helped purchase many buildings in the Old City and in various locations in eastern Jerusalem.
(photo credit: REUTERS)
Advertisement
Down through the centuries, Jerusalem has known many who have sought to occupy and ravage it, from the Roman legions to the Ottoman Turks to the Jordanian military. Each has come and gone, wreaking havoc, plundering the city which has served as the beating heart of the Jewish people since time immemorial.But despite every ruin the occupiers left behind, every building they tore down and each stone they pried loose, our adversaries could never succeed in severing the eternal Jewish bond to the place.And while the Holy City has had plenty of captors, it has also been blessed with a string of patrons, men who have devoted themselves and their philanthropic efforts to the task of rebuilding Jerusalem’s past while also ensuring its Jewish future. In the modern era, two such figures stand out for their boldness, vision and especially their accomplishments: Sir Moses Montefiore and Dr.Irving Moskowitz, who died last week at the age of 88.While their backgrounds could not have been more different, both will go down in history as having resolutely fortified the Jewish presence in the Land of Israel and reclaiming key parts of our ancient patrimony.Montefiore, of course, is popularly known for the windmill bearing his name in Jerusalem’s Yemin Moshe neighborhood, which he built to provide flour to needy Jews. An Italian Jew born in Livorno in 1784, he went on to become a leading British Jewish banker and financier who was knighted by Queen Victoria in 1837 and lived to the ripe old age of 100.He visited the Land of Israel for the first time in 1827, one of seven trips he made over the subsequent five decades, and it left an extraordinary imprint on his soul.Anyone who reads the remarkable diaries that he and his wife, Judith, left behind cannot help but be inspired by their deep and profound commitment to enlarging and strengthening the renewed Jewish foothold in the land of our forefathers.His plan, as he wrote, was to “begin in the first instance with the building of houses in Jerusalem.” In 1860, he supported the establishment of Mishkenot Sha’ananim, the first Jewish neighborhood to be built outside the walls of the Old City, and subsequently backed the founding of several others as well. In addition, he purchased orchards in Jaffa, which served to provide Jews with the agricultural training they needed to cultivate the land and build its economy. In retrospect, none of these steps sounds very controversial, perhaps because we have all become accustomed to the fact that places such as Mishkenot Sha’ananim are indisputably ours.But at the time, Montefiore’s efforts encountered plenty of hostility from local Arabs, who raided the neighborhood and attacked its Jewish residents. Undeterred, he continued to pour resources into building up the city. As he noted in his diary, “Begin the hallowed task at once, and He who takes delight in Zion will establish the work of your hands.”The same can be said of Dr. Moskowitz, who together with his wife, Cherna, did so much to revive and bolster Jewish life in Jerusalem, Hebron and elsewhere through the Moskowitz Foundation, which was established in 1968.A physician and businessman, Moskowitz was born to Jewish immigrants from Poland to the United States.More than 100 of his family’s relatives were murdered in the Holocaust. He was driven by a desire to ensure Israel and its future.The Moskowitz legacy can be seen in the hundreds of Jewish children who now live and play in eastern Jerusalem neighborhoods whose reclamation he championed such as Silwan, Shimon Hatzaddik and Ma’aleh Hazeitim.It can be heard in the sing-song of Talmudic learning that he supported in yeshivas such as Beit Orot, adjacent to Mount Scopus, along with others in the so-called Muslim Quarter of the Old City.And it can be felt in the throngs of tourists who visit the Western Wall Tunnels, where they not only learn about the Jewish people’s historical link to Jerusalem, but experience it too.In 2008, the Moskowitz Foundation established the Moskowitz Prize for Zionism, with the aim of promoting Zionist values, which I was honored to receive two years ago. And it also helped to support the aliya and resettlement of thousands of Bnei Menashe immigrants from northeastern India, who are returning to our people after 2,700 years of exile.Over the years, many on the Left have carped and complained about the work of Cherna and Irving Moskowitz.But like Montefiore before them, the Moskowitz family has continued to march forward with their vision, undeterred by the nay-sayers and critics. I have no doubt that a hundred years hence, when the grumbles of the detractors will be little more than a distant memory, the nation of Israel will look back on the Moskowitz family and the neighborhoods which they backed and built in the same manner with which Sir Moses Montefiore is now viewed: as guardians of Jerusalem and champions of the right of the Jewish people to the entire Land of Israel.May his memory serve as a source of blessing and inspiration.

The writer is founder and chairman of Shavei Israel (www.shavei.org), which assists lost tribes and hidden Jewish communities to return to the Jewish people.
Advertisement
Subscribe for our daily newsletter