Gaza: From bad to worse 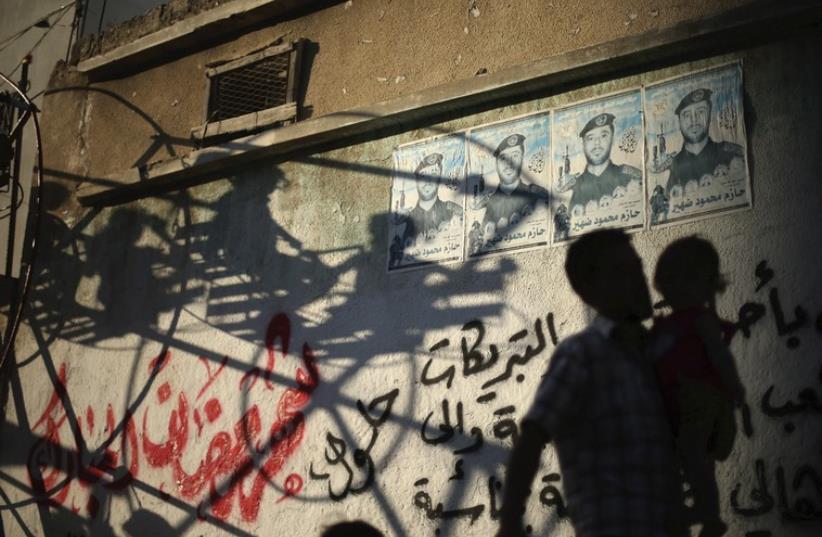 A PALESTINIAN man carries his son past graffiti on a building in the Gaza Strip.
(photo credit: REUTERS)
Advertisement
One year has passed since Operation Protective Edge, the 2014 war between Israel and Hamas in the Gaza Strip, and we have seen many articles by analysts this past week who fail to report the Palestinian perspective. The burning question in the minds of the Gazan people is why has there been a one-year delay of the reconstruction? The answer is simple – both Hamas and Palestinian Authority President Mahmoud Abbas want hold the purse strings of the reconstruction funds, which donor nations pledged at $5.5 billion. Donor nations may be skeptical of the shaky unity government, which almost failed in the year since its establishment with the April 2014 “Shati Agreement.” Hamas’ priority is how to reconstruct its military capabilities and tunnels, since the Egyptians created a two-kilometer buffer zone, destroying the smuggling tunnels that made Hamas leaders rich.Now that the funds have dried up, Hamas has issued a new tax upon the Gazan people.A recent report by the Independent Commission for Human Rights (ICHR) states: “[According to] testimonies submitted to ICHR by citizens from different social categories, these taxes, which are imposed on different commodities and services in the Gaza Strip, aggravate the suffering of the people. Citizens who wish to import goods are bound to pay taxes to receive ‘import permission.’ “This implies that the competent authorities have started to implement the Solidarity Tax Act. In fact, prior to the import, the authorities identify the quantity of the goods and then decide on what tax to enforce. These taxes that are imposed under the pretext of ‘normal rise of prices’ have a negative economic impact on the consumers.Furthermore, the taxes are imposed on governmental services.”Also, a new tax has been imposed by Hamas during the month of Ramadan: each person who wishes to stay in a mosque for services must pay NIS 20 from the 19th to the 29th of Ramadan.Flyers have been distributed in Gaza’s mosques about the “Ramadan tax.”The damage caused by Protective Edge is as follows: • 2.5 million tons of rubble remain in Gaza to this day.• 200,000 workers lost their means of employment.• 80 percent of the Gazan people are surviving on welfare.• 40% of Gazans are living below the poverty line.• 22,000 Gazans are homeless. Only 600 caravans have been provided to the Gaza Strip since the end of the war.• 29 Palestinians were executed by Hamas during the war.• Several terrorist bombings by Salafist groups occurred in the Gaza Strip.The destruction of the economic, moral and psychological status of the Gazan people is still felt today.A few days ago, I held Skype calls with friends in Gaza asking them about their feelings since the war. Ahmad, from Khan Younis refugee camp in Gaza, said “the rule of Hamas in the Gaza Strip is like throwing us into a pit. If Hamas will continue their policies, they will bring more death and destruction to their own people.”Muhana, from Khan Younis City, said, “We are living under a dictatorship regime. Hamas kills any opposition.Since Hamas took over the Gaza Strip in 2007, there is an absence of any Palestinian political factions and the Gaza Strip today looks as if the next upcoming war bells are ringing.”Azmi, from Shejaiya, said, “The situation in Gaza right now is that hunger, poverty and unemployment have reached the highest percentage since Hamas took over the Gaza Strip.”Several reports have been published by the UN, UNHRC and other international organizations discussing the reconstruction, the economic situation and the mental health of the Gazan people, but there is no benefit from these discussions one year after Protective Edge.According to the UN secretary general, there are no schools – no hospitals – no electricity and no proper drinking water and this is the reality for the Gazan people these days.

The writer is a human rights activist, political analyst and commentator on internal Palestinian politics.
Advertisement
Subscribe for our daily newsletter