Getting away with murder

Israel should support the US in taking a principled moral stand against the PA ’s intolerable conduct. 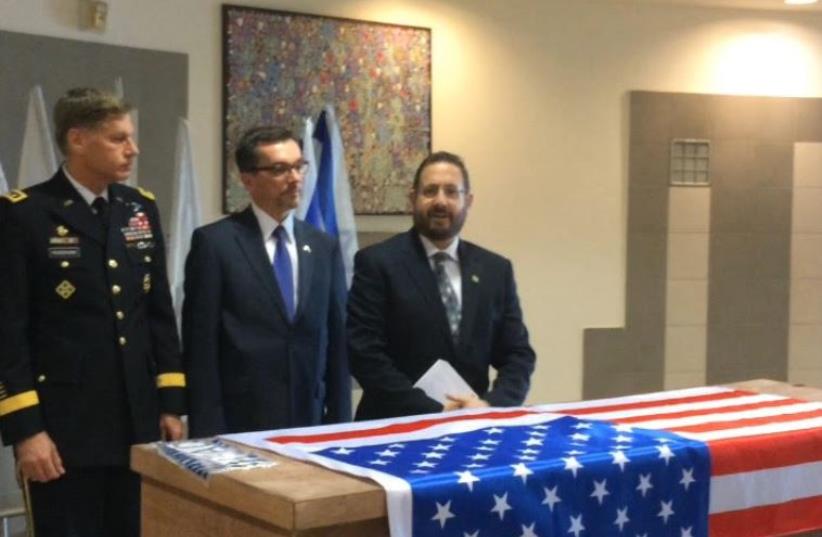 MK Dov Lipman, reading a letter from the family of terror victim Taylor Force at a small ceremony held at Ben Gurion Airport, March 11, 2016.
(photo credit: DOV LIPMAN)
Advertisement
American taxpayers’ money is being used by the Palestinian Authority to encourage and glorify murderous terrorism. A group of Republican lawmakers has drafted legislation to end this scandalous state of affairs and Israel should support this legislative effort, even if it risks destabilizing the PA .The tragic story of Taylor Force has become a rallying cry in the push to force the Palestinian Authority to stop funding the families of so-called martyrs and payrolling convicted terrorists serving time in Israeli prisons.On March 8, 2016, Force was stabbed to death on the Jaffa beachfront after Bashar Masalha, a Palestinian from Kalkilya, went on a murder spree that left 12 others wounded, including a pregnant woman.Israel knew that Masalha’s funeral would become a demonstration of support for terrorism and delayed the release of his body until May.According to a transcript provided by Palestinian Media Watch, the official PA news agency reported that friends, family and people of the region celebrated Masalha’s funeral as if it were “a large national wedding.” Why a wedding? Because “martyrs” who die while carrying out an act considered to sanctify Islam are rewarded in the afterlife with 72 “virgins of paradise.” Nowhere in the news coverage was Masalha’s “martyr” status challenged.Other-worldly compensation is not the only kind enjoyed by terrorists like Masalha. Official PA policy provides an annual stipend for “martyrs” who are killed while attempting to murder innocent civilians, thus incentivizing murderous terrorism.The vast majority of the PA ’s annual budget is provided by donor countries. The US alone provides the PA with $300 million annually. It follows that, in a grotesque twist of events, US taxpayers’ money is indirectly being used to honor criminals like Force’s murderer and encourage more terrorism and bloodshed. Donors’ money is also used to fund the official PA news agency, which reinforces the narrative that Palestinian terrorists are heroes.Republican lawmakers want to put an end to this situation. A bill named after Force and introduced by Sen. Lindsey Graham would restrict funds “available for assistance for the West Bank and Gaza” unless the president certified that the PA was “taking credible steps to end acts of violence against Israeli citizens” and that it had “terminated payments for acts of terrorism against Israeli citizens.”There is legitimate concern that passage of the Taylor Force Act could destabilize the PA. Good projects that benefit Palestinian society might end and money used to pay Israeli companies, including Israel Electric, might be discontinued. Israel has no interest in seeing the PA collapse.The resulting anarchy would force Israel to become more directly involved in everything from education and health services to garbage collection.The cuts would force the PA to choose between supporting terrorism and investing in better governance. A Palestinian political culture that prioritizes violence against Israelis above nation-building and economic development for Palestinians is the single biggest obstacle to peace.The PA might not stop funding terrorism even if it means losing a large portion of US aid, and this might lead to the destabilization or even collapse of the PA . But what is the alternative? Standing by while the PA allocates US money to a culture of hatred and terrorism is hardly an option.There is no guarantee that the current stability and security cooperation that Israel enjoys with the PA will continue, especially when the PA sponsors incitement against Israel and demonizes it. Already, large percentages of Palestinian society strongly oppose the PA ’s security coordination with Israel and view it as a cynical arrangement that perpetuates a kleptocratic Palestinian leadership.Also, the Taylor Force Act stipulates that funding for the PA security forces will not be made conditional upon changes in PA policy. There will also be an opportunity to reassess the situation if the PA appears to be on the verge of collapse.Israel should support the US in taking a principled moral stand against the PA ’s intolerable conduct. The Taylor Force Act has the potential for creating an atmosphere more conducive to peace. At the very least, it is a necessary reaction to evil and a testament to Force’s beloved memory.