Moses was at the top of Mount Sinai where he received the entire Torah in order to pass it on to the nation after descending from the mountain. 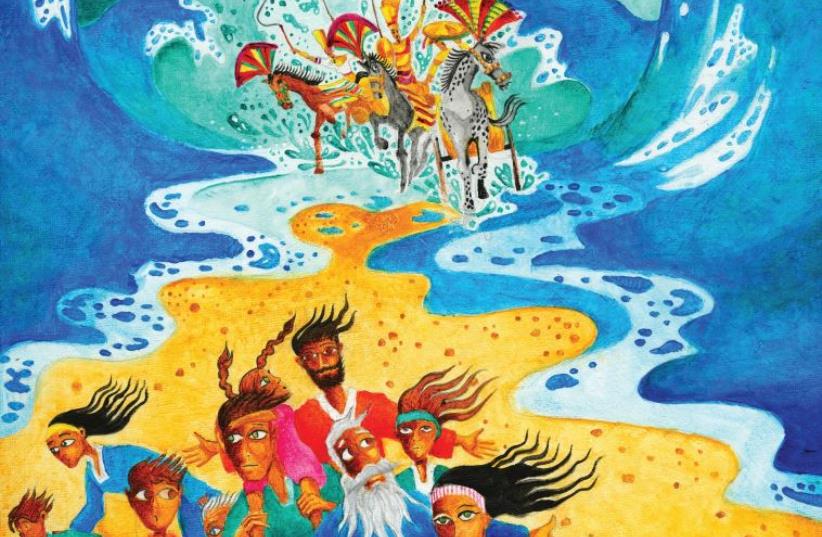 Illustration by Darius Gilmont, from the German-language ‘Torah for Children,’ published by Ariella Books, Berlin
(photo credit: WWW.DARIUS-ART.COM/WWW.ARIELLA-VERLAG.DE)
Advertisement
The story of “Het Ha’egel” – the Sin of the Calf – stands at the center of this week’s Torah portion. It happened 40 days after Moses, the esteemed leader, disappeared. Forty days of the nation left on its own. During these days, Moses was at the top of Mount Sinai where he received the entire Torah in order to pass it on to the nation after descending from the mountain.But on the 40th day, a major mishap occurred.The nation that had just recently been liberated from an Egypt overrun with idols and superstitions had not yet internalized the deep change God wished to make, and created a golden calf – an idol – and then danced around it while reciting: “These are your gods, O Israel.”Moses, having descended from the mountain, is astounded by the spiritual crisis affecting the nation, and after calming the situation and destroying the calf, he asks for forgiveness on behalf of the nation.Moses, who to this day is a model of responsible leadership, did not agree to disconnecting from the nation, but insisted on continuing to lead, and therefore began a process of reconciliation with God.After God was reconciled, Moses took advantage of the moment and made a rare request: “And now, if I have indeed found favor in Your eyes, pray let me know Your ways, so that I may know You, so that I may find favor in Your eyes.”(Exodus 33:13) Moses wanted to know God’s ways. He knew very well that as a leader, there might be difficult times when he would prefer to shirk the burden of leadership, and for that reason he wanted to know God’s ways. As though he were saying: “Just as you – God – do not relieve Yourself of responsibility, so I wish to never shirk my responsibility, but I want to know how to do this.”What are God’s ways? Is there a guiding line that God uses in leading reality? God responds affirmatively. Indeed, there is such a line, and He is willing to reveal it to Moses.Luckily, more than 3,000 years after these events, we can also read God’s response and glean from it guidelines on how to continue leading – ourselves, our families, our communities, and all of humanity – responsibly and devotedly.And here is the answer, known as the Thirteen Attributes of Mercy: “Lord, Lord, benevolent God, Who is compassionate and gracious, slow to anger and abundant in loving kindness and truth, preserving loving kindness for thousands, forgiving iniquity and rebellion and sin.” (Exodus 34:6-7) In general, it might be said that these guidelines/ attributes direct us how to behave mercifully toward people. Mercy, compassion and forgiveness are the recipe for responsible leadership. But if we pay attention, the list begins with the name of God appearing twice – “Lord, Lord.” The sages of the Talmud saw this repetition as part of the directive, and explained it this way: “‘The Lord, the Lord’: I am the Eternal before a man sins and the same after a man sins and repents.” (Talmud Bavli, Tractate Rosh Hashana, daf 17) The first condition for mercy is the clear knowledge that the basic relationship does not change and will not change. When people reconcile, often they retain grudges from the time before the reconciliation.God says to Moses and to us, the readers: Successful reconciliation is based on the clear knowledge that nothing can really come between us. Even if there is distance between us now, even if we are going through a crisis now, there is nothing that can prevent us from becoming close again.This is not merely a declaration. It is an obligation.If there is nothing that can come between us, we must always aim for a complete connection. This obligation in marriage, in parenting, and in general interpersonal relationships, is the basis for all the good we can create. In order to love, one must commit; in order to forgive, one must be connected.God’s ways are not a recommendation. This is a guideline for a life of mercy, grace and truth; a life that all people aspire to live.The writer is rabbi of the Western Wall and Holy Sites.