"While Obama hobnobs with Gulf Cooperation Council delegates, of whatever rank, he should note that they too now crave nuclear power in response to Iran’s reactors." 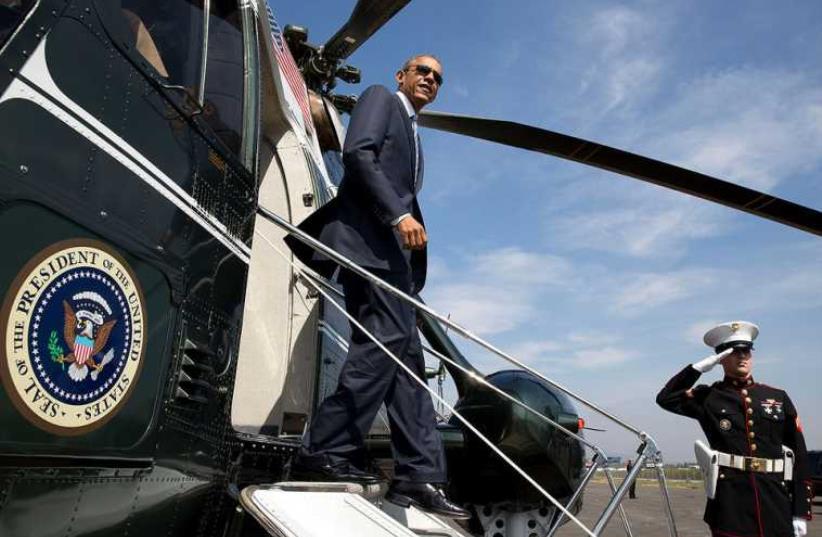 President Barack Obama disembarks Marine One at the Brackett Field landing zone in San Dimas, California
(photo credit: OFFICIAL WHITE HOUSE PHOTO / PETE SOUZA)
Advertisement
Doubtless, the undeclared purpose of US President Barack Obama’s summit with the six members of the Gulf Cooperation Council was to further isolate Israel and single out Prime Minister Benjamin Netanyahu as the region’s lone, obsessive troublemaker. But, confoundedly, the summit has only underscored Obama’s own loneliness.The conference was to have produced a ringing endorsement of Obama’s handling of the Iranian nuclear threat, diluted among diverse disruptions that plague the region. That show of unity was to have left Israel as the sole holdout on a solution that all other local players welcome. Instead, there was a diplomatic embarrassment of unprecedented proportions.After it was announced that all six Gulf potentates would participate in the Washington summit, four demonstratively opted to remain home – foremost Saudi King Salman, along with the leaders of Bahrain, Oman and the United Arab Emirates. They were replaced by lower- ranking representatives. Only the emirs of Qatar and Kuwait put in an appearance.This fact alone hardly qualifies Wednesday’s meeting at the White House, followed by today’s sessions at Camp David, as a summit. Obama’s hard-pressed spokespeople made considerable efforts to deny that this in any way constituted a snub. Yet try as they did, they could not erase the impression that the decision to stay away, after all details and arrangements were worked out, is not a minor hiccup.
See the latest opinion pieces on our page
Paradoxically, the no-show leaders could find sustenance for their rationale in Obama’s own attempts to downplay the embarrassment. In an exclusive interview to the London-based, pan-Arab Asharq al-Awsat newspaper on the summit’s eve, Obama defined his aim as deepening “our cooperation across a range of areas.”He went on to list assorted concerns, such as “our counterterrorism efforts with a focus on stemming the flow of foreign fighters and terrorist financing to conflict zones, as well as countering the evil ideology of ISIS. We can work together to resolve ongoing conflicts – in Iraq, Syria, Yemen and Libya – and address underlying sectarian tensions which hold the region back.”Barbaric as Islamic State is, though, the Saudis and their neighbors fear a far graver menace – Iran. They are as distressed as Israel by the emerging deal with Tehran that at best would only delay its production of nuclear warheads.They do not relish being sidetracked by a focus on jihadist gunmen, for whose alarming ascendance they anyhow blame the US president.Obama threw them a bone in his interview: “Iran is a state sponsor of terrorism. It helps prop up the Assad regime in Syria. It supports Hezbollah in Lebanon and Hamas in the Gaza Strip. It aids the Houthi rebels in Yemen. So countries in the region are right to be deeply concerned about Iran’s activities, especially its support for violent proxies inside the borders of other nations.“It’s important to remember that Iran already engages in these activities without a nuclear arsenal. We can only imagine how Iran might become even more provocative if it were armed with a nuclear weapon.Moreover, it would become even harder for the international community to counter and deter Iran’s destabilizing behavior. That’s one of the reasons why the comprehensive deal we’re pursuing with Iran is so important – by preventing a nuclear-armed Iran it would remove one of the greatest threats to regional security,” Obama said.But there’s the rub: The Saudis – like Israel – do not believe Obama’s deal will do the trick. If anything, it is likely to make a very bad situation infinitely worse by enabling Iran to equip itself with atomic weapons just as a previous disastrous American deal enabled North Korea.And while Obama hobnobs with Gulf Cooperation Council delegates, of whatever rank, he should note that they too now crave nuclear power in response to Iran’s reactors. Although oil-glutted, their pretext is the need for energy sources.The blame for this burgeoning nuclear race must be laid squarely at Obama’s door. He conducts negotiations only in name. The bottom line has already been scripted – the removal of sanctions from the ayatollah regime while leaving it very viably on the nuclear threshold. As four GCC leaders have indicated, this is not exclusively Israel’s nightmare.