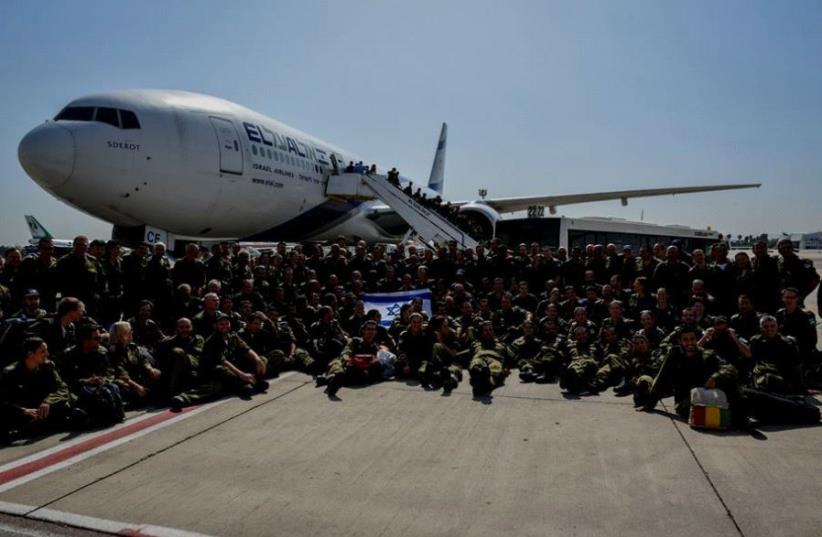 Israeli aid to Nepal
(photo credit: IDF)
Advertisement
On many issues, Israel is truly a Light unto the Nations and leads the way. However, there is one area where we take a massive back seat to our successful brethren around the world.When it comes to fund-raising, Israeli humanitarian aid organizations are caught between a rock and a hard place.Drawing upon Israeli expertise and experience, dozens of Israeli nonprofits do life-saving and transformative work around the globe. They provide medical treatment in rural Ghana. They send search and rescue teams to post-earthquake Haiti. They run women’s health seminars in Nepalese villages.Yet, until recently, Israeli law prevented such organizations from receiving tax deductible status. Without the coveted clause 46 of the Income Tax Ordinance – the Israeli equivalent of a US 501c3 certificate – Israeli organizations, which meet the needs of vulnerable individuals in developing countries, were severely limited in their ability to raise money at home.In 2015, an advocacy campaign spearheaded by the umbrella organization Society for International Development Israel succeeded in changing policy and getting Israeli aid organizations to qualify for tax deductible status.Philanthropic giving, however, has been extremely slow to respond to this new reality.A study conducted by OLAM – a broad coalition of 48 Jewish and Israeli organizations working in the fields of humanitarian aid, international development and global volunteering – shows just how grave the situation is.In 2016, a mere 3% of the donations raised by Israeli humanitarian aid and international development organizations came from within Israel.In comparison, Jewish aid organizations headquartered in Australia receive 100%, and in the UK and the US receive upwards of 97%, of their donations from local sources.With little homegrown support, Israeli aid organizations are left knocking on the doors of Jewish foundations and communities overseas. But, these doors are not opening so readily either.Some 62.5% of Israeli aid organizations were established since 2007, a turning-point in the relationship between world Jewish philanthropy and the Israeli nonprofit sector.Reeling from the global financial crisis of 2007-2008, Jewish donors who had traditionally supported Israeli nonprofits looked at the relatively unscathed Israeli economy and asked: Where are Israeli philanthropists? Feeling the pinch, some of these donors stopped giving altogether; others reduced their donations; and yet others predicated their contributions on the presence of Israeli funding partners. The majority of Israeli aid organizations, born in the shadow of 2007, were impeded in their overseas fund-raising efforts before they were even out the gate.In addition, while many international Jewish aid organizations are supported by their governments, or at least have an open door to the portals of power to advocate for their causes, their Israeli counterparts get little of either.With constraints on their ability to raise money at home and abroad, Israeli aid organizations face a more difficult than usual fund-raising challenge. In many cases, this stymies their impact in the world.What would it take to lower the barriers such organizations face and to galvanize Israelis – mega-donors and average citizens alike – to financially support organizations that serve the world’s most vulnerable? This is but one of the many questions and data-driven conversations that will take place at OLAM’s second annual Focal Point gathering in Manhattan next week.The conference will bring together OLAM coalition partners, philanthropists, foundation professionals, Jewish communal leaders and young adults to tackle questions like: How do we bring more Jewish funding and volunteers to the field of global Jewish service and international development? In the case of Israel, the necessary steps are relatively clear. We need Jewish philanthropists outside Israel to ramp up their support for Israeli aid organizations, while simultaneously goading their Israeli counterparts to action. We need several Israeli philanthropists to get excited about and champion this nascent field among their peers. In tandem, we need Israeli aid organizations to devote more resources to producing fund-raising materials in Hebrew that target donors inside Israel.But, most important, we need to challenge the scarcity mindset prevalent in Israeli society – a sense that our prosperity is precarious and our own needs so great that we cannot afford to share with others.How do we begin to shift such a deeply rooted attitude? Many of OLAM’s coalition partners have already demonstrated that education and first-hand experiences can go a long way in changing minds and motivating communities to open their hearts and wallets.Imagine, for example, if Israeli schools followed the example of the UK-based nonprofit Tzedek, which runs pen pal programs between Jewish schoolkids and their peers in developing countries. Such a program would cultivate a generation of Israelis aware of the commonalities across humanity as well as the relative blessings in their own lives.Imagine if exponentially more Israeli backpackers would incorporate meaningful volunteer experiences into their travels abroad. They would be more inclined to initiate grassroots fund-raising campaigns after a natural disaster, as the Israeli alumni of Tevel b’Tzedek did following the 2015 earthquake in Nepal.Societal shifts don’t happen overnight. But, their impact is widespread and deep. If we begin the important work of extricating Israeli organizations from their fund-raising quagmire today, we will help unleash their potential to positively impact the world tomorrow.The writer is executive director of OLAM, a coalition of 48 Jewish and Israeli organizations working in the fields of humanitarian aid, international development and global volunteering, which will hold its annual conference in New York next week.