Hillary may be no dummy, but she is a great hypocrite. 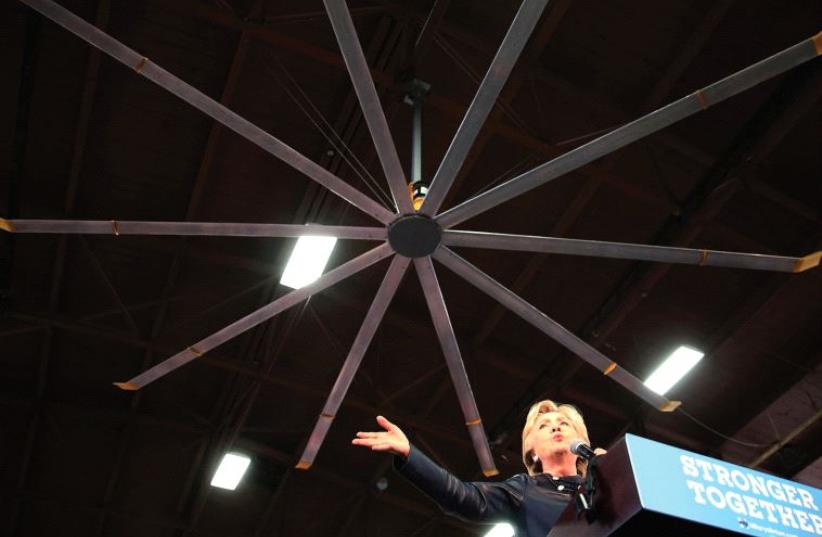 Hillary Clinton
(photo credit: REUTERS)
Advertisement
During the second US presidential debate on Sunday night at Washington University in St.Louis, Democratic nominee Hillary Clinton did her best to sidestep the issue of the tens of thousands of e-mails she deleted from her private server.This she tried to accomplish by urging listeners to “factcheck” on her web site.But then, co-moderator Martha Raddatz asked a question – posed by a social media user -- surrounding alleged excerpts, released by WikiLeaks, from her exorbitantly paid speeches. In one such address to Wall Street bigwigs, Clinton purportedly said to the hosts she pretends in pubic to revile, “You need both a public and private position on certain issues.”Is it okay, Raddatz asked on behalf of the person who had submitted the question, “for politicians to be two-faced?” Clinton’s response was to compare her double-dealings with America’s 16th president -- or at least to Steven Spielberg’s rendition of Abraham Lincoln in the Oscar-winning film.“I was making the point that it is hard, sometimes, to get the Congress to do what you want to do,” she said. “And you have to keep working at it. And, yes, President Lincoln, [in] trying to convince some people…used some arguments; convincing other people, he used other arguments.That was a great…display of presidential leadership.”This analogy was so ridiculous that even Hillary knew she had better squirm her way out of it. “But, you know, let’s talk about what’s really going on here, Martha,” she said, self-correcting and diverting attention to her Republican rival. “Because our intelligence community just came out and said in the last few days that the Kremlin, meaning Putin and the Russian government, are directing the attacks -- the hacking of American accounts -- to influence our election.”Indeed, she declared, “We have never in the history of our country been in a situation where an adversary, a foreign power, is working so hard to influence the outcome of the election, and…they’re not doing it to get me elected.They are doing it to try to influence the election for Donald Trump.”One could almost hear Russian President Vladimir Putin and Iranian Supreme Leader Ali Khamenei laughing out loud at this assertion. Why in the world would they want to throw a wrench into the good thing they have going with America in a state of weakness? What could possibly possess them to wish to rock the boat? Iran is getting billions of dollars in cash and renewed business deals; Russia is starting to realize its dream of becoming a superpower again. Furthermore, with a Clinton White House, radical Islamists would have an easy time entering the US – as “refugees” -- to wreak havoc on the “Great Satan.”Now, Hillary may be no dummy, but she is a great hypocrite.This was evident during the debate not only in her assault on Trump’s escapades with women and wealth.Even more striking was her shock and awe about foreign powers attempting to influence the upcoming US election.As a former member of the Obama administration, she ought to know a thing or two about such a practice. Yes, her pals in the White House and State Department invested hundreds of thousands of dollars in a concerted campaign to prevent the re-election last year of Israeli Prime Minister Benjamin Netanyahu. They did this by funneling “grant” money to a far-Left, pro-Palestinian NGO called OneVoice.A Senate investigation revealed that the activities and political leanings of OneVoice were well-known. In addition, as the Washington Free Beacon reported in July, a senior State Department official admitted that he had deleted several e-mail exchanges pertaining to the administration’s coordination with OneVoice, whose grants and oversight were done by then-US Consul General in Jerusalem Michael Ratney.“It is completely unacceptable that US taxpayer dollars were used to build a political campaign infrastructure that was deployed…against the leader of our closest ally in the Middle East,” said Sen. Rob Portman, who chaired the subcommittee that investigated the fiasco.Not to worry, though. Private money from Hillary’s billionaire friends, such as the virulently anti-Israel George Soros, was also spent on the effort to keep Netanyahu from winning the election. Another organization, established specifically for this purpose, was V-15 (victory 2015).Founded by an Israeli named Nimrod Dweck, V-15 hired US consulting firm “270 Strategies” – comprised, as World Net Daily reported – mostly of former top staffers for Obama’s 2012 re-election campaign. Dweck told WND that it was OneVoice that persuaded him to hire the firm.The attempt to topple Netanyahu by bolstering the Israeli Left failed abysmally, much to the dismay of Obama and cohort Democrats. But theirs was a blatant example of foreign intervention in the election process of another country.I guess Hillary thinks that’s ok, as long as it’s her team running the interference.The writer is the managing editor of The Algemeiner