How to end the Palestinian Authority’s ‘pay-for-slay’ laws

Even more mind-boggling is that not only do Americans unwittingly pay these stipends with their taxes, they are codified in Palestinian law. 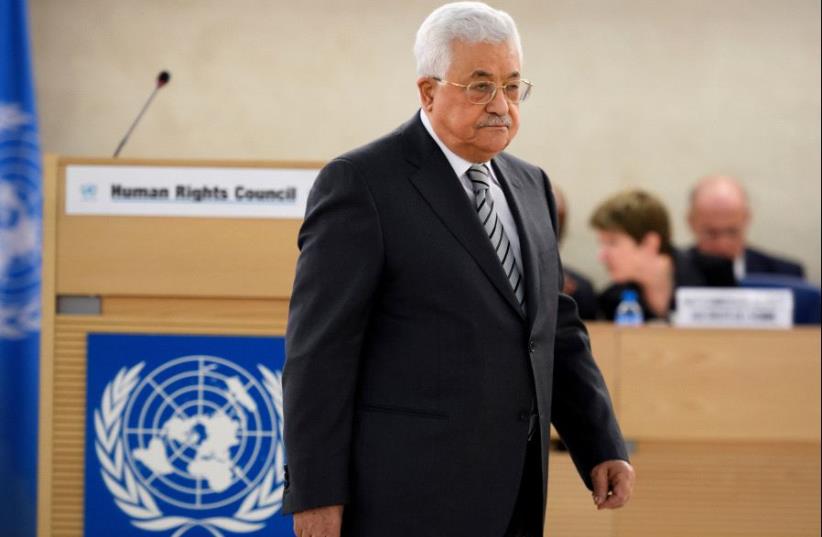 Palestinian President Mahmud Abbas arrives to delivers a speech during the United Nations Human Rights Council on February 27, 2017 in Geneva
(photo credit: FABRICE COFFRINI / AFP)
Advertisement
Terror returned to Israel last week (February 28) when a Palestinian terrorist, Saad Muhammad Ali Qaisiya, entered the West Bank home of an Israeli man and tried to stab him to death. Instead, the Israeli – whose wife and infant were also at home – successfully fended off Qaisya, grabbed a gun and killed him.Back in the Qaisya’s village of Dhahiriya, it’s likely that Qaisiya’s family held a traditional martyr’s celebration for him – and awaited the life-long reward money that terrorists’ families receive from their government, courtesy of American taxpayers.In fact, murdering Israelis and Americans is lucrative business for Palestinian terrorists and their families; terrorists are paid monthly “salaries” as high as $3,429 while in prison. When released, they receive as much as $25,000 in reward money and often become PA civil service employees. In Qaisiya’s case, if he was married, his family will receive a $368 monthly stipend in perpetuity, and additional funding depending on the number of children he had.Even more mind-boggling is that not only do Americans unwittingly pay these stipends with their taxes, they are codified in Palestinian law.US legislators are trying to do away with these US-funded “pay-for-slay” policies which, in 2016 alone, enabled the PA , together with the PLO , to pay out $300 million in US funding to terrorists and their families. The PA and the PLO delivered roughly the same amounts in 2014 and 2015, according to a recent study published by the Jerusalem Center for Public Affairs.Last week, Senator Lindsey Graham (R-South Carolina), along with senators Roy Blunt (R-Missouri) and Tom Cotton (R-Arkansas), and US representatives Doug Lamborn (R-Colorado) and Lee Zeldin (R-New York) paved the way for American taxpayers to keep their hardearned money from being used as compensation for murder: They introduced legislation that would suspend aid to the PA until the government ends its policy of paying rewards to terrorists and their family members.Other legislators already have announced their support for the Taylor Force Act, named for the former US Army officer and Vanderbilt University graduate student who was killed by a Palestinian terrorist during a stabbing rampage near Tel Aviv in March 2016.Instead of condemning the deadly attack, PA President Mahmoud Abbas’s Fatah faction hailed the killer as a “heroic martyr.”Several other legislators – senators Ted Cruz (R-Texas), Tim Scott (R-South Carolina), Marco Rubio (R-Florida), John Boozman (R-Arkansas), Richard Burr (R-North Carolina) and John Thune (R-South Dakota) – also have announced their support as co-sponsors.“This legislation shines a light on a very real problem,” Graham said. “Why is the Palestinian Authority paying young Palestinians to commit acts of terror against innocent Americans like Taylor Force or Israelis? The Palestinians need to decide – do they condemn these horrible acts or do they reward them? You can’t be a partner in peace when you are paying people to commit terrorist acts.”Graham previously introduced the legislation in September, but the congressional session ended before the bill came to a vote.Already, there are hopeful signs of support for the bill’s passage from the Trump administration; a senior White House official with knowledge of the Taylor Force Act said the administration welcomes the legislation and that Trump will sign it into law if approved by Congress.“The Palestinian Authority’s use of its resources to provide material support for terrorism – indiscriminately targeted at American and Israeli civilians – is a grotesque example of how well-intentioned US generosity can be turned against us,” a senior White House official told The Washington Free Beacon.Another early sign of support from the Trump administration was its freezing of $221 million in aid for the Palestinian Authority that the Obama administration released in its final hours.“This legislation highlights practical steps the PA can take to demonstrate a real commitment to ending the vicious cycle of hatred and violence that has prevented the Palestinian people from the prosperity and security they could otherwise be enjoying,” the senior White House official said.The significant financial incentives to commit attacks have had a clear effect: from September 2015 through 2016, 47 people were killed in Palestinian terrorist attacks and 675 others wounded. These attacks included 169 stabbings, 104 attempted stabbings, 139 shootings, 55 incidents of vehicular ramming and one bus bombing.It’s unlikely that withholding funding from the PA will immediately change a deeply ingrained mindset of hatred toward Israel and the US – particularly one that has been cultivated in Palestinian culture and codified into law.Such transformation would probably take decades at the very least. But in the meantime, the US won’t be handing the PA financial incentives to create more killers of innocent American and Israeli civilians.The author is executive director for public policy for the Union of Orthodox Congregations of America, the country’s largest Orthodox umbrella organization. Follow him at @NDiament.