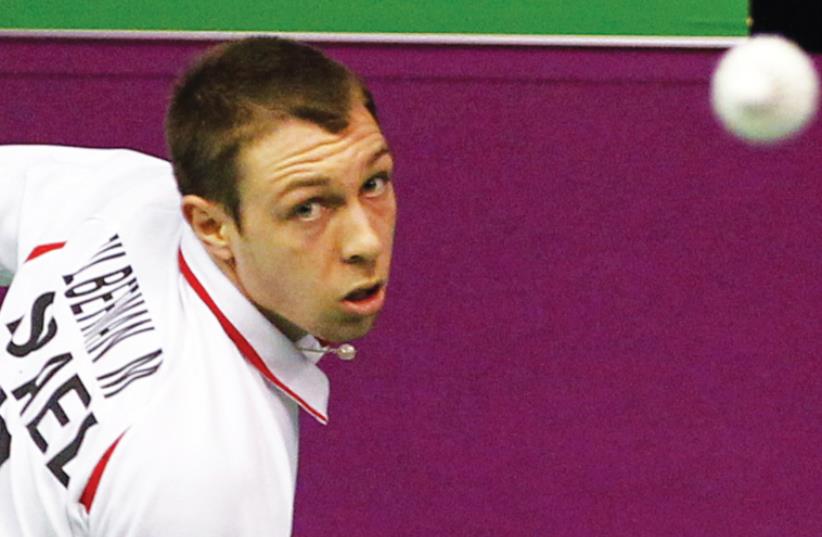 AFTER MUCH commotion, Israel’s Misha Zilberman will play his first-round match in the badminton world championships today in Jakarta, Indonesia.
(photo credit: REUTERS)
Advertisement
The recent polemic expressed by some members of the Indonesian Muslim community against the Indonesian government’s decision to finally grant a visa to Israeli badminton player Misha Zilberman to participate in the world championship clearly showed partiality toward the Palestinians and constituted an act of anti-Semitism.A total failure to respect our sacred values of multicultural diversity was implicitly expressed by a member of the Indonesian House. Representative Sukamta, who spoke on behalf of Partai Keadilan Sejahtera, one of the biggest Islamic-based political parties in Indonesia, stated, “We do not accept Israel as a country.” Similarly, Indonesian and Islamic Middle East political researcher Hamdan Basyar asserted, “A diplomatic relation with Israel will hurt the Indonesian citizens due to the fact that the majority of its citizens are Muslim” on two Indonesian news sites.As a Hindu Indonesian citizen born and raised in Bali, an island in this country where the tourism industry has contributed significantly to our national GDP and who has equal right to share his perspectives on this controversy, here are my rebuttals.First of all, the law of the Indonesian Republic written under Undang Undang Republik Indonesia nomor 40 tahun 2008 declares that an act of discrimination toward different races and ethnicities disrespects and opposes the values of Pancasila, the 1945 constitution and the Universal Declaration of Human Rights.When I read comments by some members of the Indonesian Islamic community who have voiced specific and blatant opprobrium toward the Israeli Jewish community due to their disappointment regarding the alleged annexation and colonization perpetrated by the Israeli government, I feel as if some members of the Muslim community are more interested in eradicating Israel than moving toward peace. I do not think that by doing this, they will have a constructive impact on the efforts to quell the ongoing violence.This form of verbal retaliation does not make them better and more civilized citizens than the ones with Islamophobic speech all over the world and it makes enforcing and implementing the anti-discrimination law seem to be redundant and nonsensical.Second of all, Islamic supremacy and anti-Semitism coexist in Indonesia and I refuse to accept it.Only because the majority of Indonesian population is Muslim, that does not mean that other minority groups who never had historical or religious conflicts with the Jews and the Israelis support this biased prejudice.When Sukamta and Hamdan Basyar made statements on behalf of Indonesian citizens, I felt disenfranchised and even oppressed because as far as I am concerned there has never been an any official research, statistics, discussions or agreement by the representatives of all recognized religions, races and ethnicity in Indonesia on the topic of whether Indonesia should have diplomatic relations with Israel.Soekarno, our first president, initiated this termination with Israel due to his conviction that what the Israeli government did to the Palestinians resembled colonization, and some members of Muslim community use this standpoint to justify anti-Semitism.I would like to challenge this justification by showing how inconsistent this argument is; there are many cases in which human rights are violated and yet Israel is the only country that has received such extreme treatment.I never heard Islamic members of the government argue for denying visas to Australians over treatment of that country’s indigenous communities.There was no public outcry when the tension between Russia and the Ukrainian government arose and Crimea was annexed, or when Iraq was invaded by the US government and its allies under the leadership of the Bush administration.There was also no anti-Syria protest when Syrian President Bashar Assad’s ferocious aggression forced his Muslim citizens to flee from Syria and put them in a very dangerous situation.There were no anti-Egyptian protests against ultraconservative Egyptian Muslim men who assaulted and raped Muslim women in public and even killed those who fought for justice and democracy during the Arab Spring.The Dutch and Japan colonized Indonesia for 350 and 3.5 years respectively and directly stole our natural resources and enslaved our ancestors without mercy, and yet the citizens of these countries can walk in and out of our country freely and our diplomatic relations with these countries remain intact.Israeli badminton player Zilberman deserved the Indonesian visa because he did not harm anyone in this country, he did not come here to impose his belief system upon us and I do not feel hurt by his presence.I believe that anti-Semitism makes a mockery of our fight to eliminate racial discrimination. The fact that some Islamic members of the Indonesian government and society spoke publicly on behalf of the Indonesian people without ever involving all other religious authority figures in the decision making process and letting us listen to both sides with objectivity and fairness simply shows me how Islamic supremacy renders democracy in Indonesia rhetorical.I refuse to be included in the aforementioned Indonesian society which condones sweeping generalizations about the Jewish and Israeli community.And finally, despite our fears, pain and ideological differences, we should not let them get in the way of our determination and commitment to build tolerance and sensibility toward a culturally diverse society as the best legacy we can leave to our next generation.The writer is a human rights activist in Bali.