‘I do not believe salvation will come from this government’

Gush Etzion's Regional Council said the demolitions raised the fear that this government has no intention of keeping its promises to strengthen the settlement enterprise. 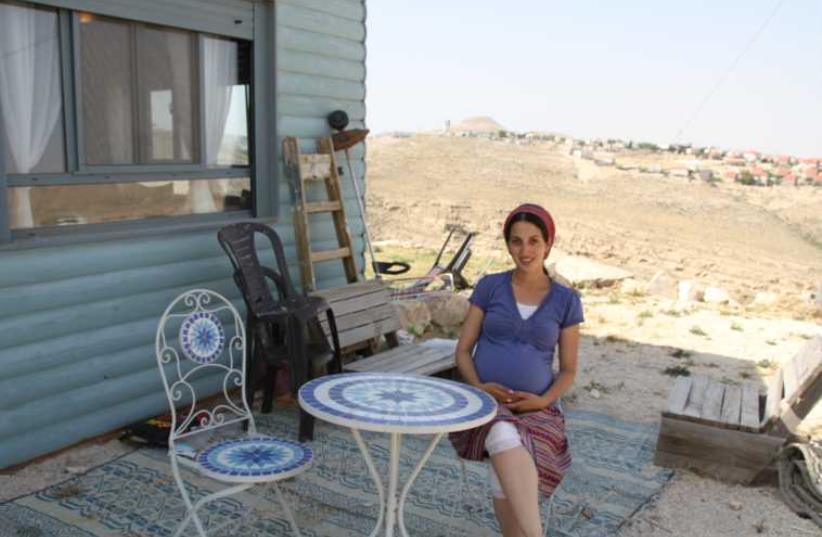 Tehila Makover outside her home in the West Bank outpost of Tekoa D.
(photo credit: TOVAH LAZAROFF)
Advertisement
As she sat outside her dream house on the edge of the West Bank outpost of Tekoa D on Tuesday, Tehila Makover said she does not think the new right-wing government would bring her any more security than she had with the previous one.“I do not believe the salvation will come from this government. The Right returns more land than the Left,” said Makover.The young mother of two voted for the Bayit Yehudi Party, which drew a coalition pledge from the Likud Party that the new government would create an action plan to authorize homes like Makover’s.But less than 48 hours after the party approved the coalition agreement, the civil administration entered Makover’s outpost and dismantled two structures that had been under construction in Tekoa D.Cinder blocks, crumpled tin sidings and a cement floor were all that remained, as Makover spoke with The Jerusalem Post .Gush Etzion Regional Council head Davidi Perl said the demolitions, which were executed on direct orders of Defense Minister Moshe Ya’alon, raised the fear that this government has no intention of keeping its promises to strengthen the settlement enterprise or to solve the problem of unauthorized construction in Judea and Samaria.“Ya’alon is acting as if the elections did not happen and as if [former justice minister] Tzipi Livni was still setting government policy,” Perl said.Ya’alon’s actions “seriously call into question the stance of the new coalition,” Perl said.According to the 2005 Sasson Report on West Bank out - posts, Tekoa D was first built in 2001 with NIS 150,000 from the Construction Ministry but without any approvals from the government or the Defense Ministry.The small community was dedicated to the memory of two teenage boys, Koby Mandell, 13, and Yosef Ishran, 14, from the nearby Tekoa settlement, who were killed by Palestinians while hiking by their homes.The report stated that the property lots in the outpost were a mixture of state land, private Palestinian property and survey land, whose status was unknown.Makover said 26 of the 30 homes in the outpost, including hers, were built on state land and another four on survey land. The two destroyed structures were also on survey land.But when the home owners started to work on them, they believed they were on state land, Makover said.Her husband, Itzhak, said that the community has photographs of the area, dating back 40 years, that showed that at no time in those decades was the land farmed or used by Palestinians.“There is no active claim of ownership,” he said. Nor are there any legal petitions against the homes by left-wing groups, Itzhak Makover said.But over a year ago, the civil administration reclassified state land in their outpost, and those two lots were not part of the survey and were registered as survey land.“The map was redrawn,” said Makover.When the land in question is finally surveyed, she said, it will likely be declared state land.Her community, through the regional council, is pushing the IDF to authorize Tekoa D, she said.The issue with those two structures was raised suddenly just last week when the civil administration issued demolition orders against them, she said.The residents of Tekoa D immediately sprang into action on two fronts, Makover said. They tried to broker a deal with the civil administration by which they would voluntarily remove a couple of hothouses and a storage unit that was located on private Palestinian property within the outpost.In exchange they asked the civil administration to leave the new homes intact until the status of the property was determined.Separately, they worked to finish the two buildings, in hopes that they could be populated, on the understanding that it is more difficult to legally demolish a home with people living in it.Although they were able to empty the property lots that belonged to private Palestinians, the civil administration, under Ya’alon’s instructions, rejected their offer and informed them on Monday that the demolitions were to go forward.At that point, according to Gush Etzion Regional Council spokesman Yehuda Shapira, the community worked to take down the two homes but managed to remove only half of one before the bulldozers arrived late Tuesday morning.Makover said they also appealed to Ya’alon, ministers and Knesset members with no success.It was too late to organize a court case or petition the High Court of Justice, she said.The civil administration, however, said that it knew nothing of any offer to remove the hothouses and a storage unit on private Palestinian property.A civil administration spokes - woman said that the community had not taken even the most basic steps, such as apply - ing for a permit for the two structures.It had summoned the owners to a meeting, but they never showed, the spokeswoman said.Even after it issued demolition orders, the civil administration tried unsuccessfully to work out an agreement with the regional council for the structures to be removed voluntarily, the spokeswoman said.She added that the structures were built without proper authorization on land that could be private Palestinian property and therefore they had to be removed.Shapira said that the regional council had been in constant contact with the civil administration about the structures and even up to the last minute had argued that there was little point in removing them, now that the government was coming up with a plan that could allow the authorization of Tekoa D.Makover said that the residents of her community “are not people who are against the state. Many of them served in elite army units.”“We did everything we could to be in good standing vis-a-vis the state, but we thought that at the very least they would wait and check the status of the land,” Makover said.She is particularly concerned over the fate of the four homes on survey land, which have young families living in them.The civil administration’s actions over the past few days “frighten me,” she said. “It is a precedent. If they did it now, they can do it again.”