Importance of Trump’s political capital in making the ultimate deal

Despite the lowered expectations, no one should doubt President Trump’s commitment. 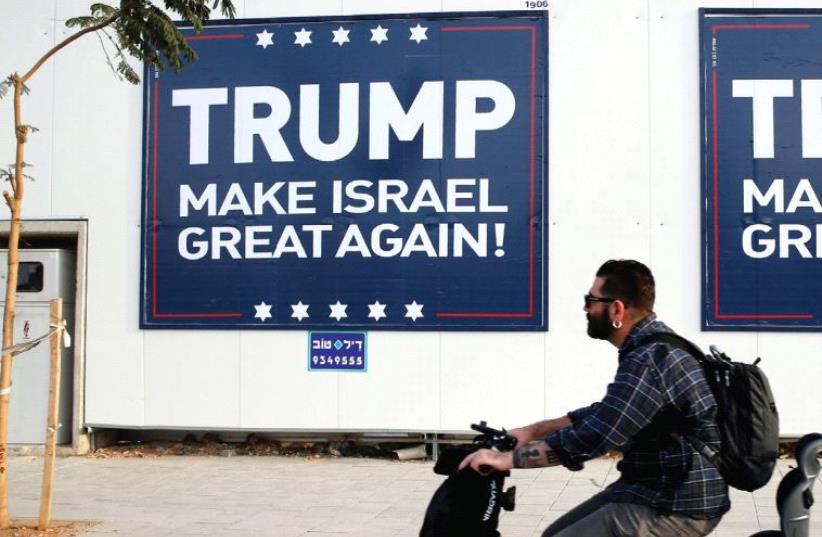 A man rides past a pro-Trump sign in Tel Aviv
(photo credit: REUTERS)
Advertisement
Despite the time, effort and attention of the Obama administration, Israelis never trusted president Barack Obama. No matter the level of security assistance, Israelis just did not like him and felt that he ignored public opinion. When trying to find a peaceful solution to the Israeli-Palestinian conflict, trust, fondness and respecting Israeli public opinion matter. Given the current global and regional security dynamic, Israel likely would take on significant risks if it agreed to change the status quo. Any future final-status agreement would require that Israel reduce the access the IDF currently maintains within the West Bank/Judea and Samaria.Israeli public opinion polling shows Israelis agree to make adjustments to the status quo in three potential scenarios. A) If Israelis believe their security will increase after a deal is made because the threat emanating from the Palestinians will decrease.B) If Israelis believe they could place themselves in a worse position by saying no to a potential deal. C) If Israelis believe they will be more secure because there is an opportunity to enjoy a security pact with a world superpower. This requires a peacemaker they like and trust.Israelis do not believe that a deal with the Palestinians will make them safer, and public opinion is trending downward. The latest poll conducted by Prof. Mina Tzemech for the Jerusalem Center on Public Affairs found that support for the Clinton parameters is the lowest on record with only 29% supporting. That number drops to 18% if the deal does not include full Israeli security control of the West Bank/Judea and Samaria. It becomes even more complicated with the non-security-based elements of the Clinton parameters as just 10% of Israelis support the transfer of the Temple Mount to Palestinian sovereignty.While support for the Clinton parameters is at a historic low, desire for American involvement has increased strongly under President Donald Trump.Israelis were asked if they could rely more on a settlement with the Palestinians under president Obama or under President Trump. 54.3% of Israelis responded they would rely more on President Trump’s involvement compared to 16.3% who responded Obama. A great majority of Israelis, 74%, answered that it is important the Americans are involved in any agreement between Israel and the Palestinians.While Israelis clearly trust President Trump more than his predecessor, his word is not enough. He will need to take action. His word only brings 31% to support a withdrawal from the West Bank/Judea and Samaria. However, if a final-status deal came with a guaranteed security pact with the United States, 51% of Israelis would agree to the Clinton parameters. With his current approval ratings in Israel a narrow majority of Israelis believe that under President Trump a US security pact is strong enough to overcome their security fears of what a final-status agreement would require.President Trump clearly has the political capital needed to make major progress toward the “ultimate deal” that he desires. He is in a better position than his predecessors. His unpredictable style also makes the 60% of Israelis who believe that the US-Israel special relationship is central to Israel’s security wonder what the president would do if Israel is the one who says no.Starting from this strong position, President Trump’s trip to Israel is a key opportunity to increase his political capital so he can move closer to his goal. In addition to meeting politicians he needs to bring his case to the Israeli people with an approach that takes their public opinion into account. Prime Minister Benjamin Netanyahu learned from his defeat in 1999 what it means to have a difficult relationship with a popular US president in the eyes of the Israeli public. President Trump’s challenge will be to show the Israeli people that they have placed their trust in someone who will not abandon them without cause and lives up to his commitments. In addition President Trump needs to show the Palestinians that he can move the ball meaningfully forward in a way that changes their day-to-day reality.Undoubtedly, this will be a difficult act to pull off.Hope is a scarce commodity among the communities that have experienced failure for decades. Only 10.1% of Palestinians and 24.8% of Israelis expected President Trump to try his hand at restarting negotiations according to the latest joint polling. Given that few believed President Trump would attempt this so early, if at all, he suffers from none of the high expectations that followed president Obama into office. While it would gall many on the left that it could be President Trump who makes the deal, it would be a grave mistake and counterproductive for them to mock his efforts.Despite the lowered expectations, no one should doubt President Trump’s commitment given that he has chosen to visit both the Israelis and the Palestinians as part of his first international trip. When President Trump arrives in the region his mission will be to show that he has Israel’s back and that an eventual deal between Israeli and Palestinian people is possible. The data show he starts in a far stronger position than those who came before him. It is in the interest of everyone that we wish the president of the United States of America the best of luck.

Joel Braunold is the executive director of the Alliance for Middle East Peace. Jeremy Saltan is an Israeli municipal politician, affiliated with the Israeli Right, and one of Israel’s leading poll analysts.All views presented are those of the individual authors and do not necessarily reflect the organizations they are associated with.
Advertisement
Subscribe for our daily newsletter