In birth and death, Israel is the happiest country in the world

Israel's high birth rate and low suicide rate are cause for celebration. 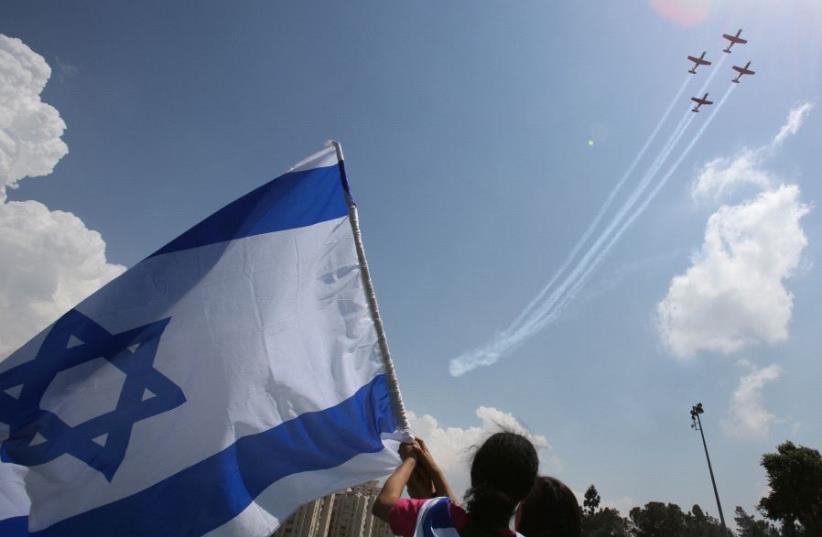 Israelis gather to watch the annual Independence Day flyover.
(photo credit: MARC ISRAEL SELLEM)
Advertisement
In this year’s annual ranking of the happiest countries in the world, Israel placed an enviable 11th.According to the ranking’s sponsor, the United Nations Sustainable Development Solutions Network (which prepared the ranking in conjunction with three economists from Columbia University, the University of British Columbia and the London School of Economics’ Center for Economic Performance), the measurement of happiness is based on the following six criteria: Income (GDP per capita); healthy life expectancy; social support; freedom; trust (absence of corruption); and generosity.The top 10 countries were the Scandinavian nations, as well as Switzerland and Iceland, and the lands down under, Australia and New Zealand. The only other countries in the top 10 were the Netherlands and Canada.The United States was ranked 18th, having slipped from 14th two years ago.What does this ranking tell us? To me it is a staggering reiteration of the promise and fulfillment of the Zionist vision. At the risk of being politically incorrect, most all of the top 10 countries are not what I would call countries “in the thick of it.”These are not world powers, buffeted by and buffeting geopolitical events and forces. They are more or less cocoon-like places facing no major international, not to mention existential, challenges (the one exception might be Sweden, facing an immigration crisis of its own creation).To me, they are not so much happy as comfortably undisturbed.Then there is Israel. So, despite genocidal calls for our destruction by the most aggressive, imperialistic nation in the Middle East; despite two bordering forces yearning to bring us down, a third force that would love to bring us down if it could get out of its own way; and a slew of domestic tensions – social, political and religious – little ol’ Israel tops the rest of the world for happiness.One need not be a rose-colored-glasses observer of this country to be amazed by this statistic.Having said that, I think the ranking does not actually go to the essence of what makes for national happiness. Far more indicative of true individual happiness are the national birth and suicide rates. If these were factored in, Israel might very well be the actual happiest country on earth.Thankfully, our birth rate far outstrips the first 10 countries (our birth rate of just over 3.1 is almost double the OECD average of 1.7), and, according to the WHO (World Health Organization), Israel’s composite suicide rate from 1985 through 2017 was lower than all of the tracked countries that ranked higher than it in happiness (Denmark was not tracked).But even leaving the ranking as it stands, the result is highly thought provoking, if not downright mesmerizing.Consider the implications: Israel is a country with a wildly disproportionate percentage of its GDP and national budget spent on defense, with mandatory national service required of its youth. In the safe spaced-obsessed West, this would portend purgatory, not happiness.Not a day goes by without some international figure either calling Israel’s legitimacy into question or holding the proverbial sword of Damocles over its head if Israel does not get with the program and confirm to some norm, policy or capitulation seen as critically necessary.This is the stuff of despair, not happiness.So what gives? Are we deluded, drugged or divorced from reality? Are we just plain unaware, blind or oblivious? Or might there indeed be something else that is happening, something that we are perhaps barely aware of.As we approach Passover, our original Independence Day, we prepare to express our gratitude for having been taken out of Egypt, out of bondage and degradation, preliminary to being brought to this land, the place chosen for us.We were told that ours was a goodly land, flowing with milk and honey, but not that it was a bucolic, trouble-free place. Above all, however, it was intended to be our place. Its indigenous species were life sustaining, and if we could manage it properly, we could look forward to a rewarding, meaningful national and individual existence.Perhaps the otherwise unaccountable explanation for Israel’s national happiness lies in the fulfillment of our national destiny. As someone who has always believed that we can get partial credit and are graded on a curve, I have no difficulty seeing the blossoming flower of our national fulfillment despite our many and manifest shortcomings.At our Seder tables this Passover, I suggest that we update one prayer to reference our being ranked as the happiest real country in the world.Dayenu! The author is chairman of the board of Im Tirtzu and a director of the Israel Independence Fund. He can be reached at [email protected]