The Jews of the Rhineland were attacked mercilessly by Crusaders en route to the Holy Land to liberate it from the Muslim infidels. 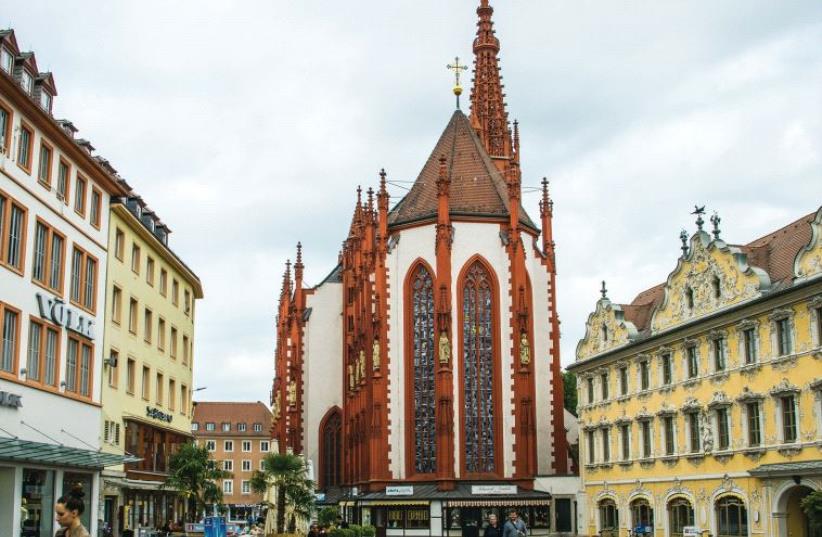 The gothic St. Mary’s Chapel in Wurzburg
(photo credit: TED MCGRATH/FLICKR/YEDIDYA WEISS)
Advertisement
I’m sitting on the top deck of a riverboat, sailing down the Rhine, watching the world go by. The scenery is quite stunning, to be sure, as rolling hills of green, quaint farmhouses and the occasional medieval castle dot a picture-postcard landscape along the banks. I am helping to staff a tour of this exceptionally beautiful part of the world, one that is rich in Jewish history. But the beauty passing me by is, in a phrase, only water-deep.Other than changing planes once or twice in Frankfurt, this is the first time I have ever stepped foot in Germany. Like many of you now reading these words, I have always shrunk at the thought of spending time in Deutschland, the scene of Judaism’s lowest moment. This aversion is amplified by the fact that, while my own extended family was largely spared the terror of the Holocaust, my mother-in-law “celebrated” her 16th birthday in Auschwitz, and much of my wife’s family perished at the hands of the Nazis. And though I acknowledge that we are now 70 years post-Shoah, and Germany is today one of Israel’s best friends in Europe, I still have to swallow hard each time I hear German spoken on the streets.For several centuries, Ashkenaz – the name Jews gave to the Rhineland – was the seat of Jewish scholarship. Rashi, the greatest of all rabbinic commentators, studied here. Rabbenu Gershom, the “Light of the Exile,” the Rosh, the Maharam of Rothenburg and the authors of the Tosafot were among the many luminaries that graced the communities of Mainz, Speyer, Worms, Bamberg, Regensburg, Cologne and dozens of other Jewish cities and villages along the Rhine. Many Jews here were wealthy, and had strong connections to the bishops and burghers of the land.Yet Ashkenaz was doomed to suffer a tragic fate.In 1096, the Jews of the Rhineland were attacked mercilessly by Crusaders en route to the Holy Land to liberate it from the Muslim infidels. Led by the infamous Count Emicho, they brutally slaughtered thousands of Jews, burning many of them alive in their homes and synagogues.Others were forcibly baptized, or used as slaves. This was, for all practical purposes, the Shoah before the Shoah.Later massacres would occur here in 1298, 1336 and again in 1349, when the Jews were accused of spreading the Black Death. Pogroms, levies of special taxes and the wearing of yellow stars or pointed hats, remarks Dr. Rachel Furst of Hebrew University and the University of Munich, were all part and parcel of Jewish life here.Yet time and time again, after each catastrophe, Jews would return to Germany in an attempt to pick up the pieces and rebuild their communities. This pattern repeated itself even after Nazi Germany perpetrated the Holocaust from 1933 to 1945, finishing the extermination job which the Crusaders had started long ago. While Jewish communities worldwide are shrinking, Israel and Germany are significantly growing.Now, I can understand why medieval Jews may have come back to the Rhine.They had few other places to go, and the economy there offered a chance to support their families. But today – when there is a flowering, flourishing State of Israel, when we have a strong country that promotes Jewish identity and can protect us from those who would defame, demean and destroy us – why is it that Jews would flock to the land that perfected the art of anti-Semitism? The Jews of the Rhineland longed for a Messiah who would end their suffering and bring them redemption. But let me make a bold and somewhat audacious suggestion to all who are listening: Perhaps Israel is the Messiah! After all, the Talmud says that the Messiah will reestablish Jewish sovereignty, ingather the Jews of the Diaspora and rebuild the Land, culminating in the Third Temple.Is this not exactly what the State of Israel has been, and is, doing? While traditionally we have thought of the Messiah as a lone individual, who is to say that it cannot be the person of the Jewish state, in the form of millions of individuals acting as one? The community of Worms, which suffered the most severely, was founded by Jewish exiles who made their way to Germany following the destruction of the First Temple. Seventy years later, while many of the exiles from Babylonia returned to Israel and Jerusalem, none returned from Worms. The leaders in Jerusalem called upon their brothers in Worms to join them, but they received this curt response: “You stay where you are in the great Jerusalem; we shall continue to stay where we are in our little Jerusalem!” Remarked the great sage the Meshech Hochma, Rabbi Meir Simha of Dvinsk: “The arrogance of Ashkenaz, in daring to compare themselves to Israel, is what caused their ultimate demise.”In his iconic song “Peace Like a River,” Paul Simon writes: You can beat us with wires You can beat us with chains You can run out your rules But you know you can’t outrun the history train I’ve seen a glorious day.That train of history is running fulltilt toward Jerusalem. All aboard, people – it’s going to be a glorious day.The writer is director of the Jewish Outreach Center of Ra’anana and a member of the Ra’anana City Council; [email protected]