Is a bridge forever?

There was a time when a new bridge was a big deal and often ended up being built by overseas contractors. Then came our highways and with them, bridges. 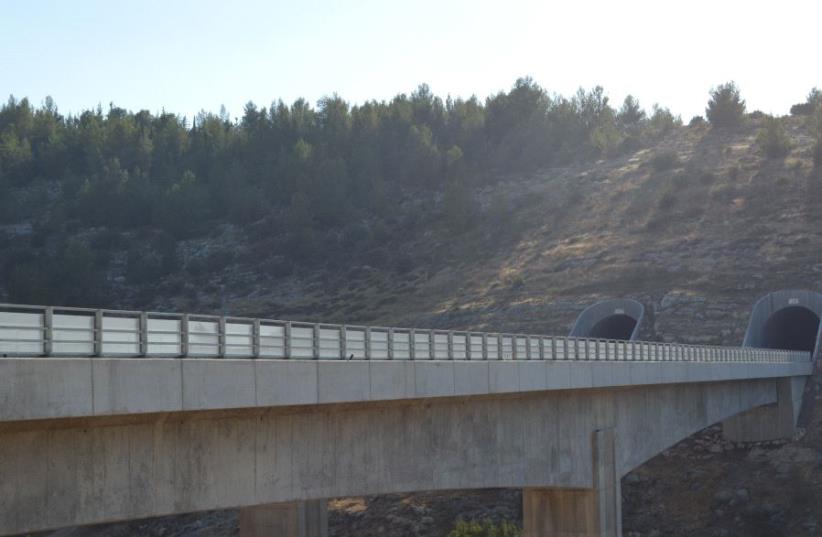 Israel's high-speed trains will race 100 mph along a network of eight bridges and six tunnels that constitute one of the largest infrastructure projects in Israel’s history
(photo credit: JAMES S. GALFUND)
Advertisement
Horrifying pictures and stories of at least 39 deaths caused by a collapsing bridge in Italy have brought many questions about bridges to mind. In the recent past, Israel has become a land of bridges.There was a time when a new bridge was a big deal and often ended up being built by overseas contractors. Then came our highways and with them, bridges.Steel bridges, concrete bridges. All kinds of concrete bridges. Drive along Road No. 4 south of Ra’anana, and you pass under a large post-tensioned concrete bridge. One can see the bolts and nuts that were used to provide extra strength to the concrete and will remain in place forever. The bolts were tightened and hopefully will remain tight. Forever? A question arises: Will anyone in 20 or 50 years go check these bolts and nuts and see that they are still doing their job? That leads to the most telling question of all: Does anyone go around to our old bridges and check that the concrete poured 20 or 50 or 100 years ago is still maintaining its strength and hasn’t turned into cheese? Steel bridges pose less of a problem because the steel has to be painted regularly, and one hopes that the painters will shout warnings if they spot cracks in the steel. Huge steel bridges like the Golden Gate Bridge in San Francisco or the Sydney Harbor Bridge in Australia are inspected and painted continuously.All concrete poured in Israel is checked by the Israel Standards Institute. Samples of the concrete are taken at the time of casting and sent to a lab. It is tested for strength after seven days and again at 21 days when the concrete reaches maximum strength. But after that, is it ever tested at all? Does all concrete maintain its designed strength? What happens to concrete after 50 or 100 or 200 years? Does concrete last forever? It’s not only the weight of cars and trucks and overloaded trucks and buses that a bridge has to carry. What about wind loads or the weight of water or snow in heavy storms? And then there are other factors that are taken into account, such as the length the bridge is spanning.It’s not only bridges that are made from concrete. What about the floor slabs in most buildings over one floor in height? Will the floor slab maintain its strength forever? Is someone taking samples every 50 years and sending them to a lab for testing? When someone buys an apartment and has it checked before signing the purchase agreement, does the buyer have the concrete checked? And walls? Take some of the great dams built in the past. They have huge concrete walls supporting the forces exerted by the water in the dam. Will the concrete always hold up? Or will a crack appear in the year 2118 and send millions of tons of water down a mountain and wipe out villages, towns and cities.Since the very first railway was built, all the tracks have been laid on heavy wooden sleepers put there to spread the weight of the train over a couple of square meters and keep the track level.Now those wooden sleepers are being taken out and sold to gardeners and landscapers and the new sleepers are made of pre-cast concrete. They won’t crack, will they? Were they checked before being laid? Are they being checked periodically? Are the yards where they were cast checked for harmful substances that could get into the concrete while it is still wet? Concrete, simply made and reasonably cheap, is made of stone, sand and cement. Water is added and the ingredients mixed in the truck on the way to the job. Was it mixed long enough? Did the driver stop on the way for a coffee or to chat with some mates? Was less water added because it is a humid day and there was already moisture in the air? Hopefully the lab tests will reveal any weaknesses. And if weaknesses are found, will that concrete be removed and replaced or will it get the iconic “It’ll be OK”? And then there is the most telling question of all: What about earthquakes? The writer has a background in construction spanning about 60 years.