The leaders of Latin America must coordinate their vigilance and counter-measures. 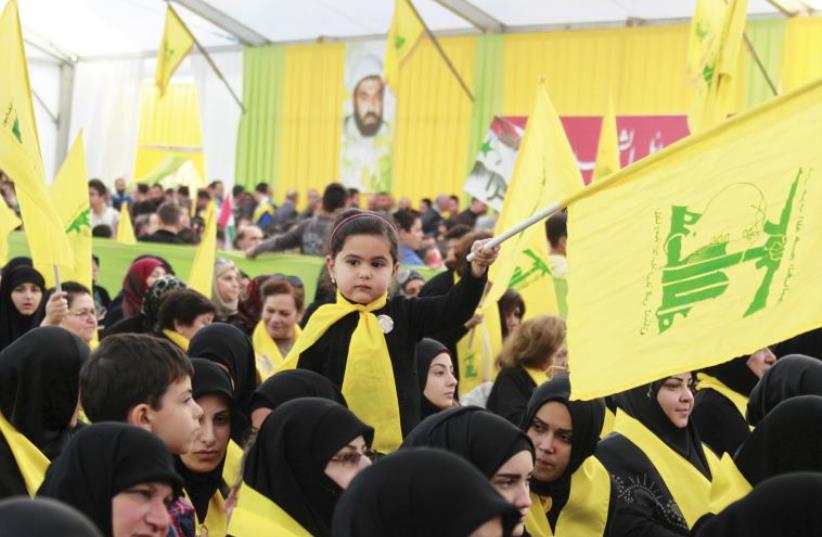 ‘HOLA, QUE TAL?’ Hezbollah flags at a rally – could these be flying in Latin America soon?
(photo credit: REUTERS)
Advertisement
The Sunni-Shi’ite conflict has come to Latin America. Sunni Islamic State (ISIS) is following in the footsteps of the long-entrenched Shi’ite Hezbollah.Venezuela under Hugo Chavez was an Iranian playground, giving free rein to its Hezbollah acolyte to arm, train and convert. During the 2006 war with Israel, the entire Wayuu indigenous tribe converted to Islam, adopting the Hezbollah name and consecrating the act by a failed attempt to bomb the US Embassy in Caracas.Now Dabiq, ISIS’s website, has announced its mission to convert the native Mayas in Chiapas, Mexico and across the border in Guatemala.Exploiting the poverty and marginalization of the indigenous peoples, ISIS announced an “anti-colonial” campaign to Islamicize, among others,the Tainos in the Caribbean, the Wayuu beyond Venezuela in Ecuador, the Guarani and Amazonian tribes in Brazil.Such sensationalist pretensions are improbable, but the Mexican beginning replicates the Syrian/Iraqi example of cooperation with smuggling cartels.Another Dabiq release, picked up by the Breitbart website, indicates that ISIS “could purchase a nuclear weapon in Pakistan and then smuggle it into the U.S. through Mexico by using existing traffic networks in Latin America.”The Nuclear Security Summit, just ended in Washington, assembled 50 states, discussing on its broad agenda the fungibility of fissile materials in the hands of jihadi terrorists.Last week’s Brussels bombers had, reportedly, conducted surveillance of Belgian nuclear scientists.The prestigious Bulletin of the Atomic Scientists quoted the Nuclear Threat Initiative’s naming of Latin American countries, “home to groups interested in illicitly acquiring nuclear materials,” listing in Central America and the Caribbean Guyana, Honduras and Surinam, and in South America Colombia, Ecuador and Peru.Indeed, among these are countries identified in the last report of the assassinated Argentinian AMIA Jewish Centre atrocity investigator Alberto Nisman – countries he claimed to have been infiltrated by 90 Hezbollah sleeper cells.Deeply implicated in the Teheran- planned 1992 Israeli Embassy and 1994 AMIA attacks, Hezbollah has long been active across the continent, especially in the lawless “Triple Frontier” region between Paraguay, Brazil and Argentina.When looking from the Paraguay side across the bridge over the Iguazu Falls, huge Shi’ite mosques dot the Brazilian horizon. Ayatollahs in SUVs dart across this no-man’s land.Down the road, at the signposted Arab Sports Club, locals told us of hearing continual shooting from inside, claiming it was a para-military training range.In the Triple Frontier, there reigns a harmony of sorts between gangs busy with money laundering, human trafficking and smuggling of drugs, arms and body parts, human trafficking.Turf wars are rare.An ISIS arrival, a Sunni infiltration into what prime minister Yitzhak Rabin called “Hezbollahland” – could create a firestorm.Far more dangerous in its rivalry with a Shi’ite Hezbollah network – now battle-hardened in Syria and the beneficiary of Iranian largesse – are the prospects of a radioactive/radiological dispersion device or dirty bomb as a demonstration of ISIS Sunni one-upmanship.The Pan-American Highway from Argentine Patagonia to the Mexican Rio Grande could be its cartel-delivery route to North America. The leaders of Latin America must coordinate their vigilance and counter-measures.As the Bulletin of Atomic Scientists vividly illustrates, the current threat stands at “three minutes to midnight.”The clock is ticking.Dr. Shimon Samuels is director for international relations of the Simon Wiesenthal Centre. Dr. Ariel Gelblung is its Latin American representative.