According to The Jerusalem Post, Ban also said that “substantial policy changes on the ground” need to be made. 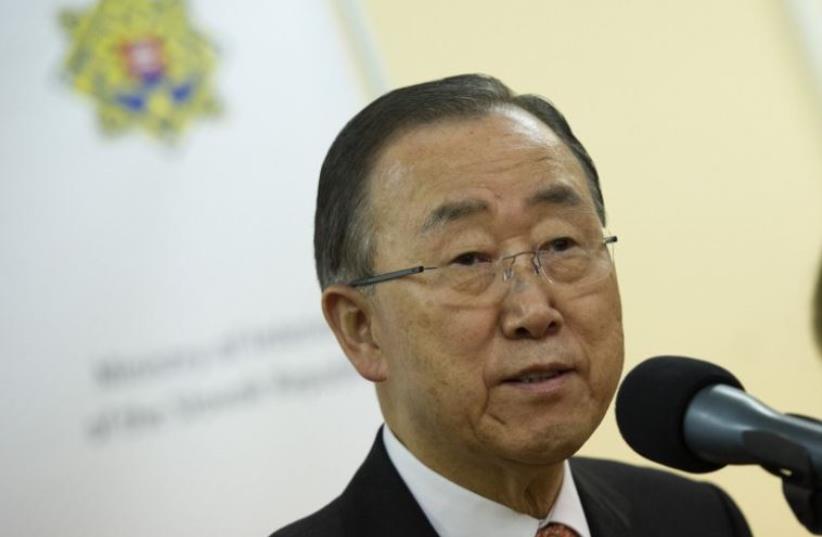 United Nations Secretary-General Ban Ki-moon
(photo credit: AFP PHOTO)
Advertisement
Last week, Defense Minister Moshe Ya’alon met with United Nations Secretary-General Ban Ki-moon at UN headquarters in New York.During the meeting, Ban customarily created moral parity between Israel and the Palestinians by emphasizing the need for “both sides” to “restore a political horizon towards a peaceful two-state solution.”According to The Jerusalem Post, Ban also said that “substantial policy changes on the ground” need to be made, and “significant steps” taken, to “strengthen Palestinian institutions, economic and security prospects, while respecting legitimate Israeli security concerns.”Because the purpose of Ya’alon’s trip to America was to discuss the US military aid package to Israel for the next decade, he wasn’t about to draw any weapons on Ban or any other host. Like anyone engaged in fundraising to stay afloat, he was in the position of having to behave more like a diplomat than the boss of the brass.Rather than go for the jugular, then, he aimed at the “consensus” issues of Iranian missile threats and Hamas tunnels.Perhaps he slipped in a paragraph or two about incitement in the Palestinian Authority and on social media, which is behind the stabbing, car-ramming and shooting frenzy that keeps landing innocent Israelis in hospitals and graveyards.What Ya’alon undoubtedly omitted, however, was the simple truth: that the whole notion of a two-state solution – the basis for the 1993 Oslo Accords that led to a triple Nobel Peace Prize for PLO chief Yasser Arafat, then-prime minister Yitzhak Rabin and foreign minister Shimon Peres – was false from the outset. Like the Iranian leadership “negotiating” a nuclear deal with world powers, Arafat used “peace-making” to enable him to continue waging war, far more unfettered and with much fuller coffers.But, hey, that’s all ancient history. And Peres – the only one of the trio still alive – has said that dwelling on the past is a “waste of time.”So let’s take a look at the present, specifically in relation to Ban’s statement about the imperative to “strengthen Palestinian institutions, economic and security prospects.” So many billions of dollars, euros and shekels have been spent on this endeavor that everyone has lost count by now. Yet nothing has changed, other than the methods employed by Arafat’s successor, PA President Mahmoud Abbas, to remain at the helm, while working toward the destruction of the Jewish state through a war of attrition in the street and international arena.Evidence of this is there for all to see on the evening news.Less visible are the goings-on within the Palestinian “institutions” that Ban and other lip-service-payers like to refer to in speeches and during summits.A few choice examples were provided last week by the Middle East Media Research Institute (MEMRI) in a new report called “Incitement to Terrorism by Palestinian Civil Society Organizations That Receive Foreign Funding.”The report focuses on five Palestinian organizations that encourage terrorism through “ceremonies exalting terrorists, public displays of support for attacks and their perpetrators, lionizing terrorists, and posting inciting content on social media.” These are: The Palestinian Bar Association, the Popular Art Centre, the Shabab Al-Balad Youth Forum, the Handala Cultural Center and Al-Nahda Rural Society.Take, for example, the bar association, the official body for lawyers in the West Bank and Gaza, which receives lots of money from various UN bodies. Recently, it spent some of this cash on the glorification of Muhannad al-Halabi.Halabi was a 19-year-old law student at Al-Quds University who brutally attacked a young couple and their toddler in the Old City of Jerusalem on October 3, while they were making their way to the Western Wall to celebrate Succot. He managed to stab the husband to death, seriously wound the wife and wound the baby. He then killed a rabbi, who had come to the family’s rescue.The young mother, with multiple stab wounds and a knife lodged in her shoulder, pleaded with the Arab shop-keepers to help her, but they just watched the show, many of them smiling. She crawled her way to the end of the street to alert police, who finally managed to kill Halabi.The Palestinian Bar Association’s response was to honor the “martyr” Halabi by awarding him a posthumous lawyer’s license. A park in his home town near Ramallah was named after him, as well. Meanwhile, Ya’alon and IDF Chief of Staff Lt.-Gen. Gadi Eizenkot publicly announced that Israeli soldiers have to remain “moral” when fending off the likes of Halabi, never aiming to kill unless absolutely necessary.Ban Ki-moon may or may not be aware of such distinctions, though he has been told on several occasions about how his organization’s money is being spent in the PA. But since even the fact that UN schools in Gaza have been proven to be Hamas hotbeds has not led to a cessation of their massive funding, it is no wonder the PA is able to get away with its own educational and cultural travesties, paid for by “peace-seeking,” “two-state-solution” fantasists.Whatever “political horizon” that Ban and his ilk imagine can be “restored” is beyond comprehension. And the more it exists in delusional minds, the greater the amount of military aid Israel will continue to need and request. Such is the nature of tragic irony.The writer is the web editor of The Algemeiner (algemeiner.com) and a columnist at Israel Hayom.