Israel’s aid should not go to American Jewish college students

Israel as a country, and certainly as a coalition government has enough of its own problems in working out what being Jewish means to preach it to its biggest Diaspora. 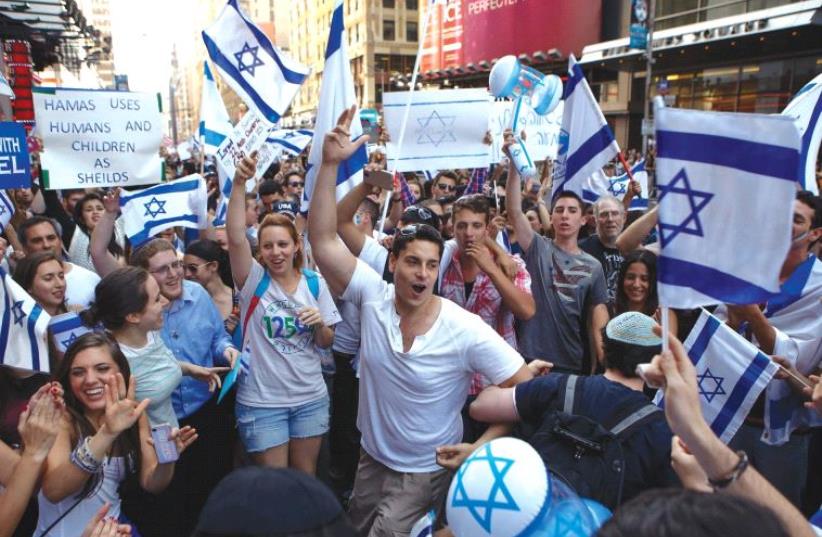 A pro-Israel rally in New York in 2014
(photo credit: REUTERS)
Advertisement
According to the latest data from the OECD, Israel gives 0.07 percent of its gross national income away in international aid. This is just under $200 million dollars. Israel ranks just above Russia (at 0.06%) and Thailand (0.02%) at third from bottom. In case you were wondering, the Slovak Republic is just above at 0.1%.With so little taxpayer money going overseas to support needy causes, it is interesting to note that earlier this month, the government unveiled the recipients of what represents 11% of its total largesse – North American Jewish college students. $22m. will be given to Hillel International, Chabad and Olami to strengthen Jewish identity and deepen Jewish engagement on campus.Mosaic United is the final incarnation of the “Government of Israel World Jewry Initiative” that became the “Israel-Diaspora Initiative,” three years in the making.Trying to mirror the success of Birthright’s tripartite funding innovation (a third from local support, a third from North American philanthropy and a third from the government of Israel), this new idea hoped to build the connection between Israel and her Diaspora.The college grants are one of the five pillars of Mosaic United, the US-registered benefit corporation that was set up to run the Israeli government sponsored program. Outside of the campus, summer camps, teen trips to Israel, outreach to young adults and service trips around the world are the other focuses of the corporation.All of the above are laudable activities. The question is why should the Israeli taxpayer foot the bill? For Birthright, the tourism value alone made sense. Add the ability to encourage aliya and you have reason for the government to help fund a program that bring tens of thousands of Jews to Israel.In this case, what is the Israeli government bringing to the table? Is there a funding gap that the richest Jewish community in history can’t cover? The three grantees (Hillel, Chabad and Olami) of this first $22m. have collective budgets that number into the hundreds of millions, so fundraising does not seem to be the issue.Is it that having the support of the government of Israel will help in campus outreach from a strategic level? If anything the reverse is true; any student will tell you that getting Israeli government support for your activities makes you a target for accusations of acting as a foreign government agent. It’s the same accusation that the government of Israel has made of the NGO community in Israel, namely that by receiving foreign government donations the non-profits are foreign agents.If it’s not a funding gap and there is no strategic value to having the government of Israel stamp on your program, is it that the government does not trust that the US Jewish community is capable of providing the correct Jewish content to their community? Israel as a country, and certainly as a coalition government has enough of its own problems in working out what being Jewish means to preach it to its biggest Diaspora. The egalitarian prayer space at the Western Wall, usage of mikvaot for non-orthodox streams of Judaism, and the issue of conversion are at the forefront of a never-ending laundry list of issues that create tension between the different segments of Jewish practice.Looking at who the grantees are of this first round of funding, the concern of the Reform and Conservative community in the US is that Israel is trying to create a more Orthodox America. Chabad and Olami are Orthodox outreach movements. It is very easy to paint Mosaic United as Israel’s way to create a more Orthodox Jewish Diaspora who, on average, are more likely to support the policies of the current government of Israel.Given the tensions that will exist in every Knesset about the issues of Judaism, the government is perhaps the least capable entity to fund a real conversation about Jewish identity today.If one of the dozen Israeli billionaires or thousand or so millionaires want to fund alongside the North American Jewish philanthropic community programs for American 13-35-year-olds, that would be wonderful.Until then, Israeli taxpayers’ international aid should support the poor, needy and sick, doubling down on the remarkable programs that help victims of the Syrian civil war, support victims of natural disasters and gift Israeli water technology to help deal with climate change around the world.The author is executive director of the Alliance for Middle East Peace (ALLMEP) and writes here in a personal capacity.