Lauder: Israel’s chance to forge a two-state peace amid terrorism

Some would say that there is no way to have constructive talks in this environment, but I believe now is precisely the time for dialogue. 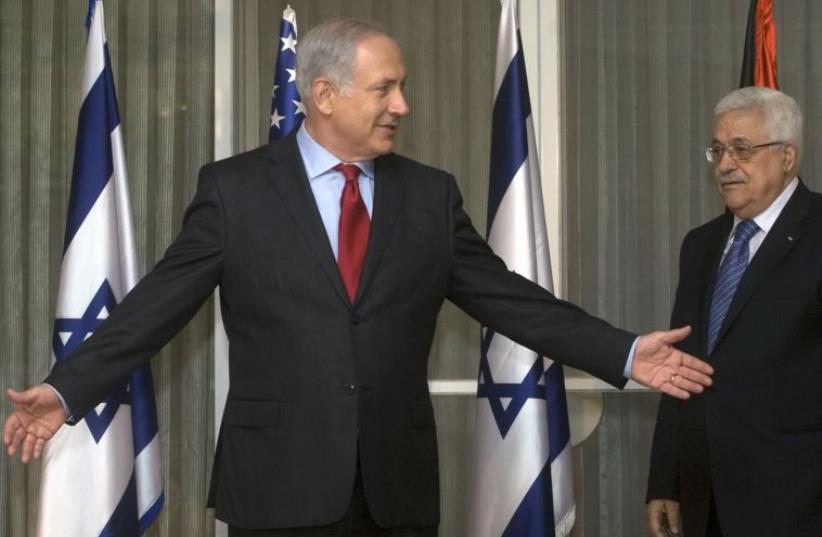 srael's Prime Minister Benjamin Netanyahu (L) gestures beside Palestinian President Mahmoud Abbas before their meeting in Jerusalem September 15, 2010
(photo credit: REUTERS)
Advertisement
After weeks of horrific violence in Israel, Gaza, and the West Bank, US Secretary of State John Kerry met with Prime Minister Benjamin Netanyahu and Palestinian President Mahmoud Abbas separately last week.It is about time for the Obama administration to reengage in the Middle East peace process. But the onus for getting back to talks does not lie at the feet of the United States. The parties themselves must come back to the negotiating table without delay and without preconditions.As we speak, Israelis are living in a constant state of fear. And lone, disaffected Palestinians are taking matters into their own hands, carrying out brutal acts. Some would say that there is no way to have constructive talks in this environment, but I believe now is precisely the time for dialogue.Rather than lay blame for what has caused this recent outbreak of violence, I am keenly focused on where we go from here. As a Jew, I have cared deeply about the peace and security of the State of Israel my entire life. As the head of the World Jewish Congress – the organization representing Jewish communities in more than 100 countries around the world – I have spent the past several months talking to world leaders who care about peace, including top Israeli and Palestinian leaders. I remain convinced that there is a pathway to real progress.We have long known the outstanding issues between the two parties: borders, settlements, the right of return, and the status of Jerusalem. While we can’t expect the details to be agreed upon immediately, what we must demand is that the parties themselves come together and agree to move the process forward. After all, seeking peace is in the interest of both the Israelis and Palestinians, and can lead to two secure, prosperous, democratic states.The old options are no longer viable. It is clear that this problem cannot be resolved with a one-state plan under a government with a vastly larger Arab population. The status quo with Israel in charge of the entire West Bank cannot continue.I call on President Abbas to rein in the extremists who are flaming the fire of violence and urge him to declare that he will recognize the Jewish State of Israel, accepting its existence alongside a state for his own people.I call on Prime Minister Netanyahu to reach across boundaries with magnanimity and generosity to acknowledge the fact that President Abbas is the commanding voice for the Palestinian people, which deserves a state of its own.I call upon both leaders to re-launch immediately a meaningful peace process that would lead to a two-state solution. Now more than ever the two parties have a unique opportunity to work collaboratively to re-set the agenda for a long-term peace.The ongoing violence in Israel is not the only reason peace is so urgent. The Middle East has drastically changed in just the past 12 months and not for the better. A fragile region has become even more perilous.I, like many around the world, have concerns about the impact of the Iranian nuclear agreement on Israel’s security. Even if the deal can constrain a nuclear Iran, it frees up billions of dollars in frozen assets to ensure the enrichment of a longstanding state sponsor of global terrorism. This is a threat both to Israel and to peace-seeking Palestinians.With so many of Israel’s neighbors dealing with economic, security, and governance challenges – including a large influx of refugees from Syria – they are becoming more fertile breeding grounds for Islamic State and other terrorist groups. The international community must combine its resources to combat these groups, but without a two-state solution, Israel will continue to face barriers to cooperation with its neighbors on the economic, intelligence, and counterterrorism solutions that are needed.As history has shown, simply wanting peace is not enough; peace must be actively sought. Prime Minister Netanyahu and a re-empowered President Abbas must demonstrate the courage of which they are both capable, following the example of Sadat and Begin, as well as Hussein and Rabin. They owe this to themselves and their people. They must do so without preconditions. The alternative to making lasting peace the priority is losing a secure state of Israel and a free state of Palestine. With peace, there is no limit to the prosperity that can be achieved by all in two secure states living side by side.The writer is the president of the World Jewish Congress.