I don’t know how the difficult temporary status quo that existed before the murder of Israeli police officers Hail Stawi and Kamil Shnaan on Friday, July 14, on the Temple Mount can be returned. 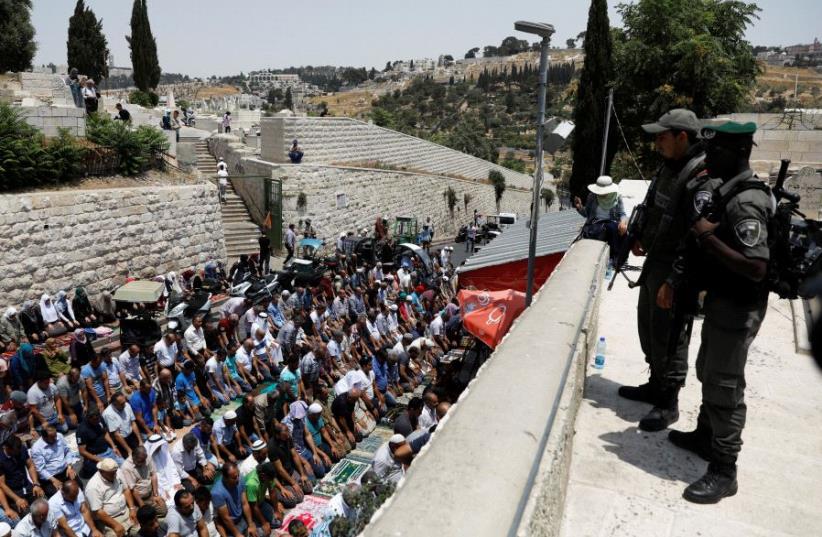 Israeli border police officers stand guard as Palestinians pray at Lions' Gate, the entrance to Jerusalem's Old City, in protest over Israel's new security measures at the Temple Mount July 20, 2017.
(photo credit: REUTERS)
Advertisement
I don’t know how the difficult temporary status quo that existed before the murder of Israeli police officers Hail Stawi and Kamil Shnaan on Friday, July 14, on the Temple Mount can be returned. In the aftermath Israel imposed a closure on the site, that was lifted to reveal metal detectors placed at the entrances to the Mount that Palestinians must take to make their way to prayer at the Aksa Mosque. This new security measure is seen as an infringement of the freedom of movement and dignity of Palestinians and the authority of the Wakf. This has been announced by the Wakf, by Palestinian Authority President Mahmoud Abbas, by Jordan’s King Abdullah, Egypt’s President Abdel Fattah Sisi and most recently by the Arab League.On July 21 the metal detectors remained and Palestinian men under 50 years of age were prohibited from answering the call to prayer on the Temple Mount.According to WAFA News Agency, the general director of the Jordanian-run Islamic Wakf, Azzam Khatib, said during a sit-in for Wakf officials and staff outside Bab al-Majlis, or Council Gate, one of the gates to the al-Aksa compound, that Muslim worshipers should not accept the new Israeli police measures for entering the Muslim holy place.They did not enter for Friday prayer. Instead they protested in large numbers in the Old City, throughout east Jerusalem and the West Bank. Three Palestinians were killed in the protests, Muhammad Mahmoud Sharif, Muhammad Hussan Abu Ghanon and Muhammad Lafi, including one who it was believed was shot by a settler. Over 200 Palestinians were wounded according to the Palestinian Red Crescent, with Palestinians throwing rocks and bottles and rolling burning tires and Israeli police answering with tear gas, rubber bullets and live fire.Then, Friday night, a 19-year-old Palestinian from the nearby village of Khobar entered the home of Yosef Salomon in Halamish and stabbed him along with his two adult children, Chaya and Elad, to death and wounded his wife while they were taking part in a Shabbat meal. The terrorist posted his message on Facebook minutes before he committed his crimes, saying in part: “All I have is a sharpened knife, and it responds to the call of Al-Aqsa. Shame on you, you who preach hate. God will take revenge on you... we are all sons of Palestine and sons of Al-Aqsa. You, the sons of monkeys and pigs, if you do not open the gates of Al-Aqsa, I am sure they will come after you and beat you with an iron fist, I warn you.”How does anyone look at the situation logically and create a solution that is both responsive to the increased security requirements that accompany recognizing that the weapons of the three Palestinians who killed the policemen had been stored on the Temple Mount, and the outcry of the Palestinian and Arab world? Since 1967 after the Israeli victory in the Six Day War Moshe Dayan determined to increase stability in Jerusalem by continuing the authority over the Temple Mount-Noble Sanctuary of the Jordanian Muslim Wakf. In his autobiography, Moshe Dayan: Story of My Life, he describes the conversation: “I said that Israeli troops would be removed from the site and stationed outside the compound. The Israeli authorities were responsible for overall security, but we would not interfere in the private affairs of the Moslems responsible for their own sanctuaries. These were two Moslem places of worship, and they had the right to operate them themselves. My hosts no doubt knew that on the day we had captured this site, I had given orders that the Israeli flag be removed from the Mosque of the Dome, where it had been hoisted. We had no intention of controlling Moslem holy places or of interfering in their religious life.”It could have been different had prime minister Levi Eshkol had time to lay out his idea for an interfaith governing body, or if Menachem Begin, a critical figure in the political decision-making process to take back control of the Western Wall and the Temple Mount in the final hours of the Six Day War, had the opportunity to express his views. For 50 years the call of Motta Gur; “Har habayit beyadeinu,” “the Temple Mount is in our hands,” has been moderated by the larger need for a Jerusalem that is inhabited by two peoples to keep the peace, especially in the Old City at the nexus of three great religions.The challenges are enormous. The call to prayer is loud enough to be heard every day by all, as are the many calls to violence that must be answered wisely and courageously by the government of Israel in concert with its friends and enemies so that three faiths can pray in peace in the City of Peace, Jerusalem, and become a light unto the world that awaits the day when Israelis and Palestinians will put down their weapons and live in peace.

The author is president of ICMEP – Interfaith Community for Middle East Peace, an NGO based in suburban Philadelphia. He can be reached at ld.snider@yahoo.com.