The BDS movement has recently been in the headlines in Italy, but luckily it's receiving the proper backlash it deserves. 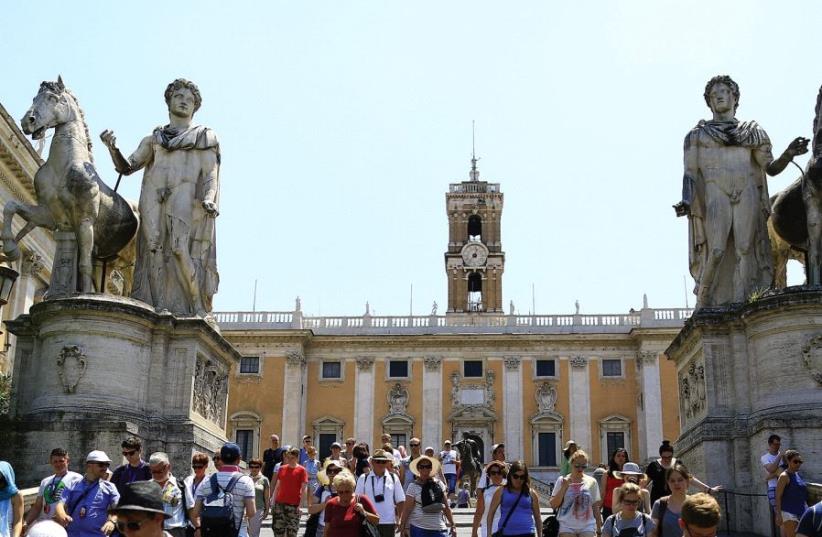 ROME’S CITY HALL, ‘Campidoglio,’ site of a recent controversy over boycotting Israel.
(photo credit: REUTERS)
Advertisement
Italian Jews know well that Haman, of the Book of Esther, was not the last villain to try to exterminate all Jews. Eighty years ago, my grandfather, whose name I bear, fled Italy to escape the Nazi-Fascist regime.Today, many consider the contemporary anti-Israel boycott movement (also known as the Boycott, Divestment and Sanctions [BDS] movement) as the new manifestation of this never-ending agenda.Each antisemitic movement has its own character, but there are common features that link them together.The most obvious of these is their view of Jews as evil, and the belief that their elimination will redeem the world. Another one, sometimes less obvious, is that all these attempts eventually fail.The BDS movement in Italy has recently been in the headlines. On March 1, the student council of Turin University passed – by a large majority – a motion asking their university to revoke the agreement of collaboration and student exchange with Haifa’s Technion – Israel Institute of Technology. Just a few days before, the BDS movement organized an event at Campidoglio, the site of the Municipality of Rome. The topic, “Gaza, let’s break the siege,” and the participation of one of the organizers of the Gaza flotilla made clear the agenda of the meeting – to accuse Israel of stripping Gaza citizens of their freedom.I was unaware of these facts during my recent visit to Università La Sapienza in Rome, where I had been invited to deliver a seminar about my scientific work on coupled Kapitza pendula (which, by the way, is an interesting subject in its own right). Entering the department of physics, I was shocked to see a huge poster, containing a photo of an Israeli soldier threatening a group of Palestinian civilians with a baton, inviting students to attend an event organized by the Center for Documentation of Palestine. The poster referenced a quote explaining that Palestinians are at risk of being uprooted from their land.The poster badly hurt my feelings, as they would have for any other Israeli citizen, and I decided to write a letter of protest to the rector of the university, Prof. Eugenio Gaudio. Luckily, in the age of the Internet, it is not necessary to fast three days to communicate with the king, and my message was immediately received by the rector, and by other influential people in the scientific community.WHEN I received a reply from the rector, I breathed a sigh of relief. He expressed his sympathy for my disappointment.He further stressed that his institution had signed important collaboration agreements with Israeli institutions, and he defined his university’s relationship with Israel as “coherent and unchanged over time.”Meanwhile, thanks to the pressure of the Jewish Community of Rome, the event at Campidoglio was canceled. The rector of Turin University, Prof.Gianmaria Ajani, rebuked the letter of the student organization, and pointed out that her university’s collaboration agreement with the Technion focuses on healthcare, rather than weapons.Turin University subsequently forbade its students to hold the conference, whose explicit goal was “to educate citizens about apartheid in the State of Israel.”As there is no apartheid in Israel, such a meeting would have, indeed, been useless.With these acts, the Italian institution made a clear statement against the BDS movement. The news was one more reason to rejoice this past Purim. (And to work harder in the future to explain our cause in Italy and around the world.)

The author is an Italian Jew and senior lecturer at the Department of Physics of Bar-Ilan University.

Tags jews in the news