Jerusalem: A consensus issue at last

Indeed, Jerusalem is becoming a consensus issue, and I recently hung the proof on the walls of the Old City. I will explain. 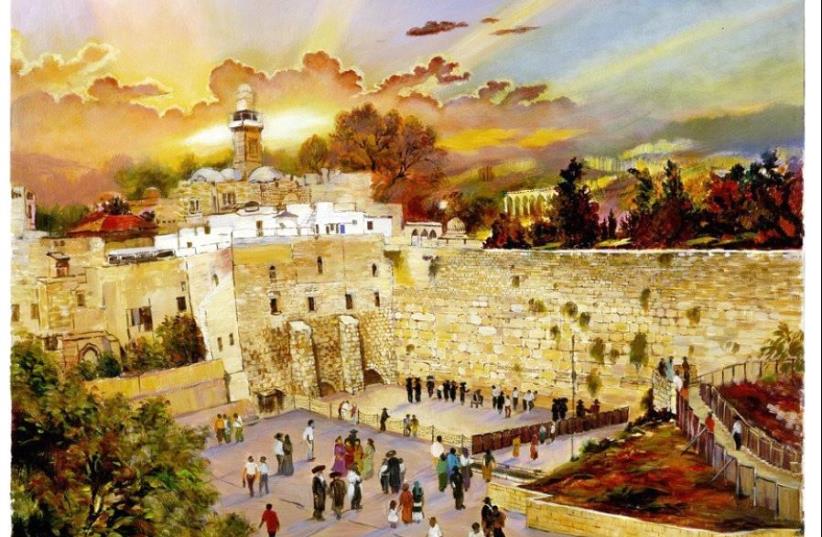 Sunrise at the Western Wall by Zina Roitman
(photo credit: JWG LTD)
Advertisement
There aren’t many issues that unite Jews across the religious and political spectrum, but the status of Jerusalem is fast becoming one of them. While “two Jews, three opinions” still remains the norm in the Jewish world, the realization that the sovereignty over Jerusalem sets a precedent for Jewish life throughout Israel and around the world is driving Jews of every stripe toward consensus.For decades, discussing the need to maintain a united Jerusalem provoked the ire of outspoken Jews on the Left, as pressure from world leaders to “end the conflict” seemed relentless and new narratives created by the international media constantly clouded the real issues. But as the realities of global terrorism and the enduring nature of antisemitism finally begins to set in, all of the outside pressure is finally being regarded as “noise,” and we are marching toward true awareness of the real underlying issue: Israel’s right to exist and the necessity of a strong and undivided Jerusalem as the foundation of the one and only Jewish homeland.Indeed, Jerusalem is becoming a consensus issue, and I recently hung the proof on the walls of the Old City. I will explain.Several years ago, the “Jerusalem Declaration,” an initiative aimed at securing grassroots support for keeping Jerusalem united under permanent Israeli control, went live on United with Israel’s online platform. In addition to acting as a public support barometer of sorts, we had always hoped that the sheer number of supporters would be impressive enough to influence those in positions of power. In May, we finally achieved that level of support.As Israel celebrated the 50th anniversary of the historic reunification of Jerusalem, we marked a momentous milestone of our own: the Jerusalem Declaration had been signed by over 500,000 people.What’s even more impressive is that we garnered that support from individuals in 168 countries, including Arab states and other nations that are fiercely critical of Israel, and every last one of them stands with Israel in support of a Jerusalem that is recognized as both the eternal capital of the Jewish People and the undivided capital of the State of Israel.With those half a million signatures in hand, we developed a hard-copy version of the Jerusalem Declaration to share with heads of state and influential leaders. This impressive hardcover book, which contained the text of the actual declaration and all 500,000-plus names, was presented to Jerusalem Mayor Nir Barkat and delivered to US President Donald Trump and Prime Minister Benjamin Netanyahu toward the end of May. Judging by the reception we received from Mayor Barkat, there is a real possibility that the Jerusalem Declaration is already making waves on the national level. But we didn’t stop there.Utilizing multiple specialized digital printing machines, we produced a massive banner bearing the actual names of the Jerusalem Declaration’s more than 500,000 supporters. Our team hung the extraordinary sign on the outer walls of Jerusalem and in several high-traffic locations throughout the Old City, and onlookers immediately took notice.Israeli residents and active IDF soldiers, Birthright groups, and tourists from around the world flocked to Hurva Square where United with Israel staffers displayed additional hard-copies of the Jerusalem Declaration and amassed additional signatures for the online petition.I share all of this for no other reason than to spotlight the power of grassroots support for a united Jerusalem. Very often, we believe that some issues are just too big for common citizens to tackle, that politicians alone hold sway over our most important cultural, religious and social matters. But that is simply not true, and especially not when it comes to Jerusalem.Jerusalem is our birthright and a part of every one of us. Jerusalem is our link to the past and our conduit to a bright future. As such, it is our responsibility to spread the message that Jerusalem is simply non-negotiable and indivisible, and the outpouring of support that we saw in the Old City throughout May and that we continue to see every day online gives us hope that we are truly making a difference.It is essential that we all speak out and remind the world that Jerusalem is not merely a city, but an eternal symbol of the Jewish nation’s deep roots in the Land of Israel. Because if the status of Jerusalem were to be called into question, the Jewish people’s right to exist in Israel – and elsewhere – would immediately follow suit. It is a consensus issue because it is a matter of national survival. We must stand united with Jerusalem so that our undivided Jerusalem continues to keep us whole.The author is the founder of United with Israel, the world’s largest grassroots pro-Israel movement, with nearly five million supporters.Dedicated to promoting unity with the People, Country and Land of Israel, United with Israel distributes critical information about Israel in order to educate, inspire and empower individuals around the world about practical ways to share the miracles and defend the truth about Israel.