To most Israelis, the government’s answer to the imminent threat of another, long overdue quake is the so-called Tama 38, a Hebrew acronym for National Outline Plan 38. 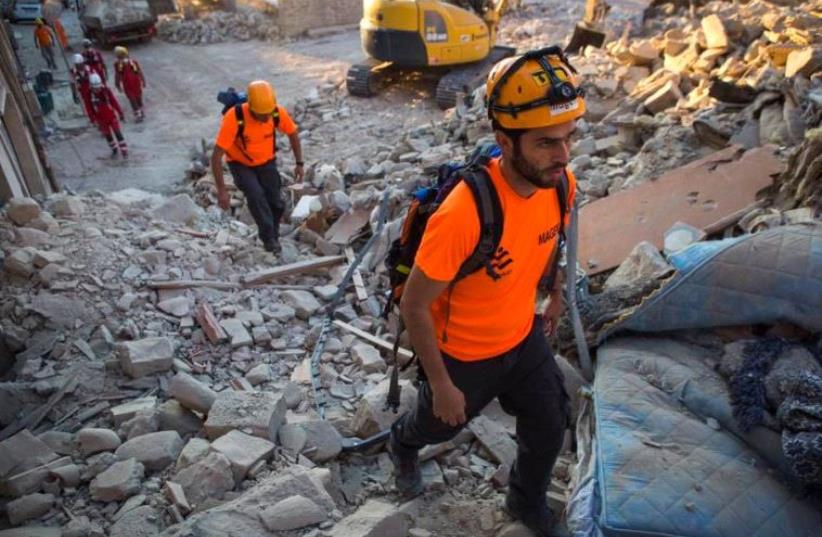 IsraAID workers in Italy.
(photo credit: ISRAAID)
Advertisement
Italy’s disastrous earthquake should serve as a timely reminder to Israelis that our country has been living on borrowed time in expectation of the area’s next big one, which experts say can happen at any time.The government is not unaware of a possible reprise of the June 11, 1927, temblor that caused severe destruction in Jerusalem, Ramle, Nablus, Tiberias and Amman. The very term is derived from the Spanish word for tremble, which is what Israelis should be doing in advance of an anticipated disaster that the government is taking only insufficient cosmetic measures to prepare for.The epicenter of the 1927 earthquake was near Jericho, but among the damage caused in Jerusalem was the collapse of Augusta Victoria Hospital on Mount Scopus. An estimated 300 people were killed then, but the preceding big quake a century earlier, called the Galilee earthquake of 1837, killed an estimated 7,000 people.To most Israelis, the government’s answer to the imminent threat of another, long overdue quake is the so-called Tama 38, a Hebrew acronym for National Outline Plan 38 for the seismic strengthening of existing buildings. In brief, the plan includes incentives for contractors to strengthen buildings and for residents to undertake the project.Tama 38 allows builders to add another story or two to reinforced buildings, the sale of whose additional apartments makes the deal profitable. Residents want to join the project because it promises to add a room to their apartments and in many cases an elevator for the building.But what sounds like a win:win transaction is not. First of all, Tama 38 offers a solution to the threat of another earthquake only for thousands of buildings built before January 1, 1980, when the government introduced a supposedly earthquake-proof building code. All buildings constructed since then would be safe – provided that contractors built strictly in accordance with the new law.According to the NGO Bimkom – Planners for Planning Rights, the public jumped at the promise of Tama 38. During the first six years after it was enacted, some 1,000 house committees applied to planning authorities throughout the country to join the project. But only 220 permits were approved and only a few buildings were reinforced. Changes were introduced in 2007 and 2010 that allowed 25 square meters to be added to a unit in any residential building built before January 1980.Among the shortcomings of the plan was its failure to limit the number of apartments that could be added to an old building, which became a source of friction among neighbors being courted by an eager contractor. In fact, the original Tama 38 allowed an old building deemed unreinforcible to be demolished and replaced by a new one.The Construction Ministry finally approved the addition of 2.5 floors to an existing building under the plan, but did so throughout the country, disregarding the differences in local housing costs, land values, and the real estate market.The ministry determined that the financial feasibility of a Tama 38 conversion – the contractors’ profits – depended at the time on a new housing unit costing at least NIS 16,500 per square meter, a price common to the more exclusive areas of Tel Aviv, rather than to the periphery. This means that in other places along the earthquake-prone Syrian-African Rift – such as Beit She’an, Tiberias, Safed and Kiryat Shmona – Tama 38 cannot be implemented.High real estate prices thus make earthquake protection available to upper middle class neighborhoods in cities whose weaker sections are not economically feasible – profitable – for contractors. And we are talking only about residential buildings, since Tama 38 cannot be implemented in public buildings, where housing units cannot be added.Following a scathing State Comptroller’s Report in 2011, the government allocated the first NIS 140 million of a recommendation to spend NIS 3.5 billion over 25 years to strengthen public buildings. The project is still in the planning phase.In addition to the engineering challenges involved in the reinforcing of each unique older building, Tama 38 ignores the particular needs of a given neighborhood, leaving the residents to decide how important it is to be protected from an earthquake. For example, if Tama 38 adds some 40 apartments to an existing building, will it provide 40 new parking spaces? With the grim views of Italy’s disaster still in our thoughts, it is urgent for the government to devise and implement a better plan, one that will benefit all our citizens, whether in the Center or the periphery.