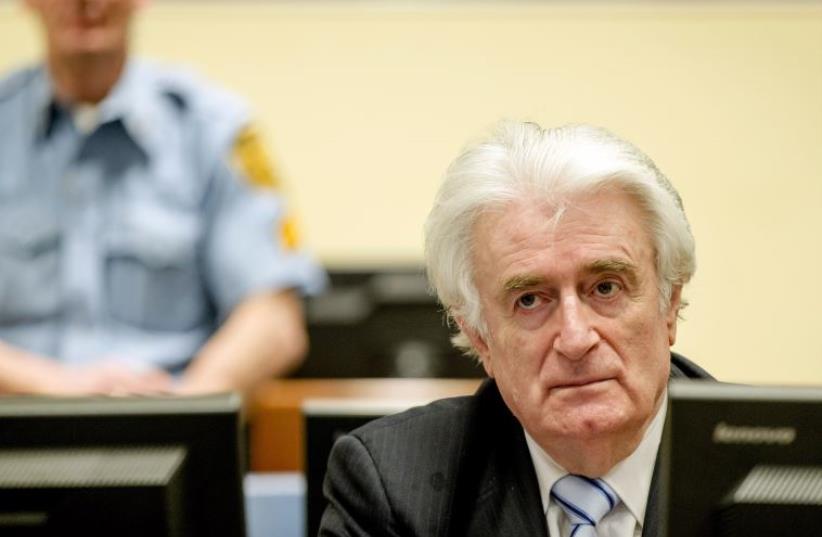 Ex-Bosnian Serb leader Radovan Karadzic
(photo credit: REUTERS)
Advertisement
Amid another apparent victory for terrorism in last week’s bloody Belgian atrocities, the evil of terrorism has also suffered a small defeat. Former Bosnian Serb leader Radovan Karadzic was convicted of genocide, war crimes and crimes against humanity by a United Nations tribunal on Thursday for his reign of terror in the former Yugoslavia.Karadzic, 70, was sentenced to 40 years in prison for ethnic cleansing, for besieging Sarajevo, and for the mass slaughter of 8,000 Muslim men and boys in Srebrenica in 1995. Observers say the trial was the most important in the 23-year history of the UN International Criminal Tribunal for the former Yugoslavia. Many consider it a defining test for the entire international system of justice.Karadzic was the most senior official of the former Yugoslavia to be tried for war crimes. The former Serbian president, Slobodan Milosevic, died in his cell in March 2006, before the end of his tribunal trial. Karadzic’s military chief, Ratko Mladic, is being prosecuted separately.United Nations human rights chief Zeid Ra’ad al-Hussein said that “21 years after Karadzic was indicted, this verdict is a forceful manifestation of the international community’s implacable commitment to accountability.”Well, yes and no.As World Jewish Congress President Ronald S. Lauder noted after the verdict: “Unfortunately, atrocities of the kind committed two decades ago in Bosnia are still occurring today, for example in places such as Syria or in Iraq.The world knows this is happening, but remains silent.“When people are butchered by genocidal forces, we must not be silent. And there cannot be impunity for the perpetrators of such barbaric and cruel acts because of political or other considerations.“As Jews, we know what genocide is. As Jews, we also know what happens when many of the perpetrators are exempted from punishment because of belated and sluggish efforts to bring them to trial.”Lauder noted that this year marks the 70th anniversary of the Nuremberg Military Tribunal, whose standards for dealing with crimes against humanity are too seldom applied. The verdict sends an important signal to the world, he added: “There cannot be impunity for crimes against humanity, or genocide.”No impunity, but no prevention either.The Anti-Defamation League welcomed Karadzic’s conviction, saying it sends “an important message to those who are engaging in or contemplating genocide that the civilized world will eventually hold them accountable, if they cannot be stopped beforehand.”Stopping genocide before it happens requires action, not talk about how it would be punished. As with most crime, future possible penalties are seldom a deterrent. Some complained that, at 70, Karadzic could walk out of prison after completing two-thirds of a tribunal sentence. With eight years of time served since his arrest, he could be a free mass murderer after little more than 20 years.The will to act – particularly by an American president – could avert immense loss of human life. Its absence could be disastrous. Take what the Clinton administration knew about Rwanda in 1974. According to Boston University professor Timothy Longman, “Those of us living in Rwanda in the period before the genocide saw clearly – there were ample warnings that violence was approaching. The lack of political will, rather than the lack of information, prevented the world from acting to stop the killing.”Given the advantage of hindsight, some dozen genocides might have been prevented over the past century: the genocide of the Armenian and Assyrian populations of the Ottoman empire during the First Word War; the genocide of the Christian Ottoman Greek population in Anatolia during the same period; the Holocaust, the 1971 Bangladesh genocide, the Cambodian genocide by the Khmer Rouge in 1975-1979.The genocide of minorities in Iraq include the Assyrians, Shabaks, Iraqi Turkmens, Yazidis and Mandeans. Karadzic was found accountable for the Bosnian Genocide, but there are millions of victims not accounted for in Rwanda.Last week, after quibbling over its stance for many months, the US government finally acceded to pleas by the dwindling Christian community of Iraq that it and the country’s Yazidi tribesmen be considered the victims of genocide by Islamic State.If history is be learned from, giving Christian genocide that label will not deter it from happening.