Speaking at Harvard University this week, Kerry presented this radically behaviorist approach to the Israeli-Palestinian conflict. 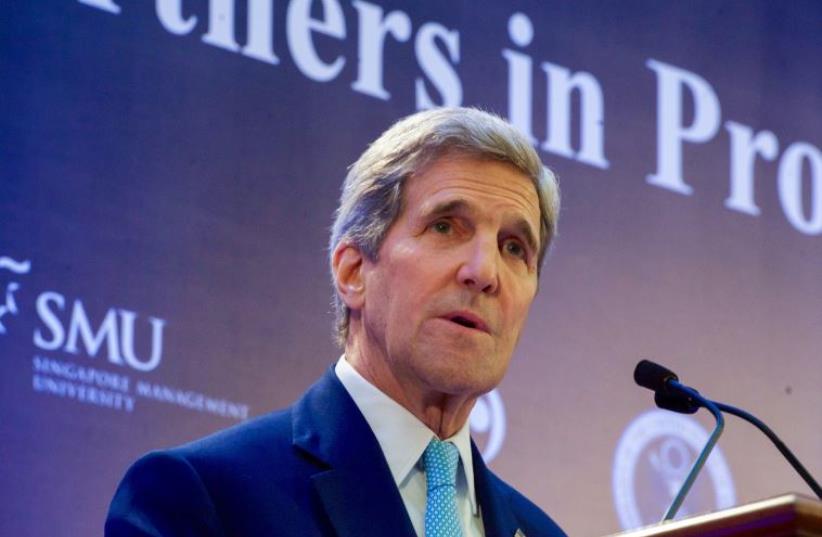 US Secretary of State John Kerry speaks in Singapore
(photo credit: STATE DEPARTMENT)
Advertisement
Do human beings have control over their actions or is their behavior simply the product of external stimuli? If you ask US Secretary of State John Kerry, humans, or at least Palestinians, simply react. Their responses – in this case stabbing, stoning and shooting innocent men, women and children – are conditioned by factors considered by Kerry to be beyond their control – namely the Jewish settlement project in Judea and Samaria.Speaking at Harvard University this week, Kerry presented this radically behaviorist approach to the Israeli-Palestinian conflict, reflecting an opinion often heard here in Israel, particularly by Palestinians and members of the Israeli Left.“There’s been a massive increase in settlements over the course of the last years,” Kerry said during a question- and-answer session, “and there’s an increase in the violence because there’s this frustration that’s growing.”According to Kerry, the building of housing in Judea and Samaria inexorably leads human beings with full control of their cognitive abilities to take to the streets of Jerusalem and Ra’anana and Itamar to hack to death people like Rabbi Yishayahu Krishevsky, 59, a God-fearing hassid of the Pinsk-Karlin dynasty, or to shoot and stab to death 78-yearold Haviv Haim.Housing construction also caused five members of Hamas to ambush a Jewish couple and shoot them as their four small children looked on in horror – only the incompetence of the murders saved these children from a similar fate. It is the Pavlovian bell signaling for a Palestinian teenager to stab to death two Israelis in Jerusalem’s Old City and slash at a woman and her two-year-old son.In Kerry’s world, human beings, or at least Palestinians, are in possession of little free will, if any. Settlements go up. Palestinians begin running people over with their cars, stabbing them with their knives, and shooting them with their guns. It is a simple cause and effect relation.But wait a minute. Could it be that Kerry is missing something in his analysis of the situation? Perhaps Palestinians are not simply captives to external stimuli. Perhaps they have control over their actions, just like you and me.Yet they choose time and again – tragically and violently – to embrace an ideology of victimhood and death worship that views the spilling of Jewish blood as a holy duty and self-destruction in pursuit of this goal as the highest form of martyrdom.And they choose, of their own free will, leaders who reinforce this ideology.Listen to what high-ranking officials from both Hamas and Fatah, the two most popular political parties among Palestinians, have to say about the current wave of violence.Hamas’s Mahmoud al-Zahar called, shortly after the murder of Eitam and Naama Henkin by Hamas terrorists, to “take up arms” to protect al-Aksa Mosque. This sort of statement is hardly newsworthy, because it is so commonplace.Meanwhile, Palestinian Authority President Mahmoud Abbas, ostensibly Israel’s potential peace partner, has kept up a steady stream of vicious lies against what he refers to as the “occupation government.”Palestinian terrorists shot by Israelis in self defense – like 13-year-old Hassan Manasrah, who gravely wounded an Israeli 13-year-old and stabbed another passerby – are said to be “cold-bloodedly executed” by Israelis. Yet Manasrah is still alive. In fact, he is receiving the best possible medical care at the capital’s Hadassah-University Medical Center.Others, like Ala’a Abu Jamal, who used his company car to ram a passersby at a Jerusalem bus stop and proceed to hack him to death with a meat cleaver, are elevated to the status of martyr. Abu Jamal had been gainfully employed at Bezeq, Israel’s national telephone company.The tragedy inherent in this tactic of resorting to horrific violence is not just that it results in the deaths of so many innocent men, women and children. The Palestinians’ choice time and again – even before the West Bank fell under Israeli control following the 1967 Six Day War instigated by Egypt – to butcher, blowup, stab, shoot and run over Israelis makes the possibility of a two-state solution to the conflict less and less likely. Who wants a full-fledged state full of terrorists on one’s border? If there is a cause and effect relationship between settlements and terrorism, it is the exact opposite of what Kerry believes it to be.