There are reasons for cautious optimism. 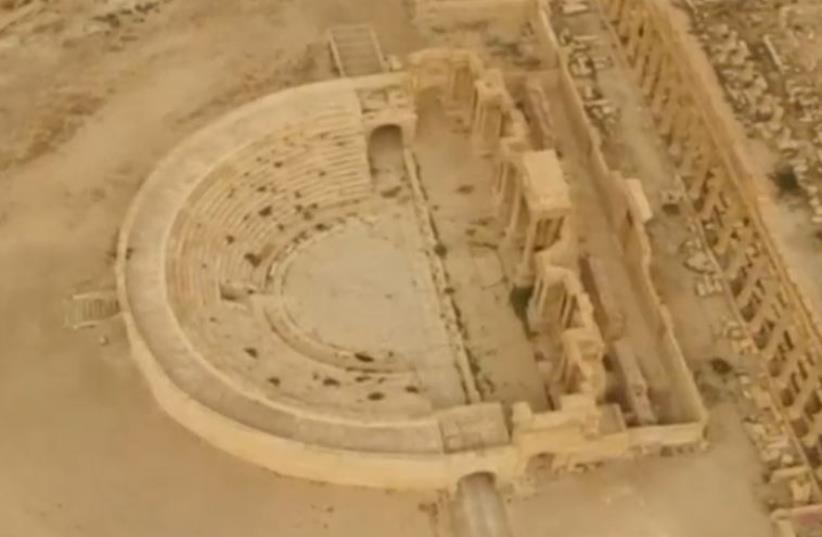 Drone footage shows ancient Palmyra city after Syrian recapture
(photo credit: screenshot)
Advertisement
The Assad regime’s recapture of Palmyra is being billed as the biggest defeat for Islamic State in Syria since Russian President Vladimir Putin decision to intervene in the Syrian conflict.Just last year, before Putin decided to launch a large aerial campaign, experts were predicting the Assad regime’s fall. In the first eight months of 2015 the Assad regime lost 18 percent of its territory. But by November of last year, the pro-Assad coalition of Russia, Iran, Syria and Hezbollah had managed to hold off Assad’s enemies and even gain a very small amount of territory.With the victory at Palmyra, Syrian forces under Assad’s rule have succeeded not only in pushing back various “moderate” Sunni opposition forces, but also ISIS troops. The eminent collapse of the Syrian government has been prevented – for the time being – and now Assad in on the offensive, thanks to Russian support.Still, neither the Palmyra victory nor the gains made by Assad as a result of Russian intervention should be exaggerated.Because of Palmyra’s treasury of ancient artifacts and historical significance – it is home to a UNESCO world heritage site – its capture by ISIS generated media attention, particularly after nihilistic ISIS troops began blowing up ancient temples and looting relics that dated back thousands of years. However, the strategic importance of the city was never great. ISIS forces probably realized it was smarter to focus its military efforts on more important locales.And despite thousands of Russian sorties, pro-Assad forces in Syria have succeeded in doing little more than stabilizing the Assad regime, as pointed out by Ari Heistein of the Institute for National Security Studies in a recent article in The National Interest.From the start of Russian military involvement in Syria until January 11, 2016, according to IHS Jane’s 360, the amount of territory under the Syrian government’s control grew by just 1.3%. The Assad regime’s net gains were made exclusively at the expense of the “moderate” Sunni rebel forces, while the Syrian government actually had territorial net losses to IS.Nevertheless, it is undeniable that IS has suffered a number of setbacks in recent days. Beside the loss of Palmyra, IS also lost its second-in-command in a US military raid. The killing of Abd ar-Rahman Mustafa al-Qaduli is thought to be a damper on ISIS’s ability to conduct operations inside and outside of Iraq and Syria.ISIS also faces mounting pressure in Iraq. Iraqi forces have launched a long-awaited offensive to retake the second city of Mosul, a key IS hub since June 2014.The weakening of ISIS is undoubtedly a positive development for Israel and for moderate Muslims and non-Muslims in the region.Another positive development resulting from the fighting in Syria has been the weakening of both Syria and the Hezbollah. Former head of Military Intelligence Maj.-Gen. (res.) Amos Yadlin noted this week in an interview with Israel Radio that the protracted fighting in Syria has depleted 90% of the country’s stockpiled missiles that previous presented a security threat to Israel.The fighting against ISIS and Russia’s intervention in Syria have also fostered new and interesting strategic cooperation between Israel and its neighbors. Israel has worked with Egypt to fight ISIS forces in the Sinai peninsula.And it recently emerged that Israel and Jordan cooperated in recent months to fend off Russian fighter jets from entering airspace over their shared borders.In testimony before US lawmakers in January, Jordanian King Abdullah told of how his country and Jordan worked together to “keep the Russians in their place.”The civil war in Syria has brought about tremendous human suffering. Hundreds of thousands have been killed and millions have been uprooted from their homes. Nevertheless, there are reasons for cautious optimism. ISIS has suffered a number of setbacks in recent days, while the battle against ISIS has created new opportunities for cooperation between Israel and more moderate Sunni states in the region. In addition, a number of Israel’s enemies – Syria and the Hezbollah – have been seriously weakened.