Yad Vashem invited the press secretary to visit its website in order to “learn about the Holocaust....” 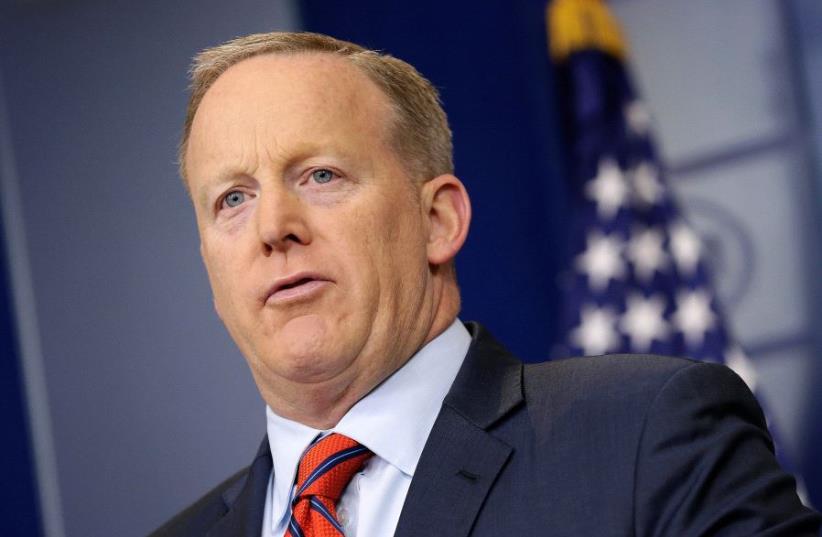 White House Press Secretary Sean Spicer speaks during a press briefing at the White House in Washington, US.
(photo credit: REUTERS/JOSHUA ROBERTS)
Advertisement
How are we to interpret US President Donald Trump’s press secretary’s stunning statements earlier this week about the Nazi regime, Adolf Hitler and the Holocaust? Was it sheer ignorance or just muddled confusion that led Sean Spicer to make up the term “Holocaust centers” as he attempted to extricate himself from his initial embarrassing comments about Assad being worse than Hitler – or is there something more inimical lurking below the surface? At the very least, we can say that the events of the Second World War and the systematically implemented genocide of the Jews were not an integral part of Spicer’s education. Apparently these events did not interest Spicer enough to push him to learn more. And if Spicer’s knowledge of basic facts about the Holocaust is in any way representative, it is safe to assume that many Westerners of Spicer’s generation (he is 45) are worryingly ignorant about the Holocaust. The situation is even worse in younger generations and in the non-Western world.According to a survey commissioned by the Anti-Defamation League that was published in May 2014, in the Middle East and North Africa just 38% of respondents said they heard of the Holocaust. Just 8% both heard about it and believed that it really took place as presented by historians.In Asia 44% heard about it and just 23% believed it took place. Younger people tended to be less aware of the Holocaust worldwide with 48% under 35 saying they have heard of it compared to 61% 50 and older.Obviously, in the West knowledge of the Holocaust is much wider spread. But even in Western Europe 10% of respondents said the number of Jews killed in the Holocaust was exaggerated. In the Americas 19% said they were. In Asia, the Middle East and North Africa and in sub-Saharan Africa far greater numbers believe this to be true.Clearly there is a pressing need to educate the world about the Holocaust in ways that are more engaging and that can be relevant for nations that were not directly connected to the events. In some countries – particularly in the Middle East and North Africa – ignorance of the Holocaust is not benign. Holocaust denial or distortion of the facts is an intentional policy of autocratic regimes which find it advantageous to deflect criticism by demonizing the Jews and Israel.Anti-Zionists deploy Holocaust denial as a means of undermining the legitimacy of the State of Israel. Belittling the Holocaust is a tactic used by those who oppose the very existence of Israel and deny the need for a uniquely Jewish state.Purposely distorting the facts about the Holocaust or denying it happened at all or that the scope of the casualties was exaggerated is also a tactic used by those who seek to destroy Israel. Those who deny the Holocaust want it to happen again.Particularly troubling, however, is the sort of ignorance exhibited by people like Spicer. These are people who grew up in free, Western countries, attended good schools and received higher education. They are intimately involved in public life. Yet, they are remarkably ignorant about the most heinous crime of the 20th century and, as an extension, about the moral lessons that need to be drawn from the historical events that, taken together, made up the Holocaust.The wall-to-wall condemnation of Spicer’s comments and Spicer’s speedy retraction and apology were reassuring.However, the best response to Tuesday’s fiasco is a call for more Holocaust education.Yad Vashem invited the press secretary to visit its website in order to “learn about the Holocaust....” Yoram Dori, former spokesman for the International March of the Living, announced the launch of the “6 Million Brothers – The 3rd Generation” project which calls on students and youngsters across the globe to write songs describing the emotions they feel while visiting German death camps in Poland.Spicer’s public display of ignorance was unfortunate.But the embarrassing incident which received extensive media coverage can be used as an opportunity to launch new educational initiatives that deepen knowledge of the Holocaust.Maybe Spicer actually has inadvertently done something to help deepen knowledge of the Shoah.