Doubtless many people were forced to do so but the truth is that many others were willingly swept up in the well-orchestrated volatility. 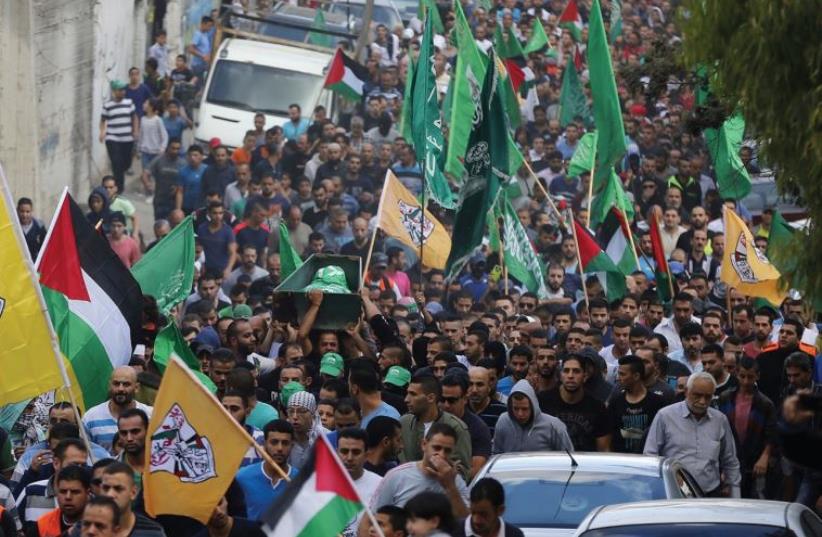 MOURNERS CARRY the body of a Palestinian killed in clashes with Israeli forces in east Jerusalem.
(photo credit: REUTERS)
Advertisement
The knee-jerk response in Israel’s Arab sector is to declare general strikes to underscore what is hyped as “popular anger.”The latest expression of such “anger” took place last week when throughout the country’s Arab communities businesses shut down for a day on Tuesday.Doubtless many people were forced to do so but the truth is that many others were willingly swept up in the well-orchestrated volatility.What did they aim to achieve? Whom did they aim to hurt? Surely they realized that they were only shooting themselves in the foot. Their strikes simply and serially fail to awe the mystified Jewish majority. The only effect, if any, strikes have is to hone even further the deeply ingrained impression that this country’s Arabs side unequivocally with Israel’s existential and implacable foes.To resort to extreme understatement, this in no way contributes to the cause of coexistence.Hot on the heels of a spate of attacks against Jewish civilians in nearly every nook of this country, the Arab general strike invariably helped establish an association – whether subliminal or conscious – between Arab businessmen and the recurrent stabbings, shootings, firebombings and rock-throwing.Such connections need not be iron-clad and incontestable.The delicate psycho-economic equilibrium can be easily upset by an intensifying sense of a tie between terrorists and the population that appears to support the deadly assaults on innocent Jews.Inevitably this will keep Jews away – at least for the short haul – from Arab entrepreneurs. This is the point Nazareth Mayor Ali Salem tried to make recently when he drove by and spotted Joint List chairman Ayman Odeh giving a TV interview on a Nazareth street corner.Salem shouted furiously at Odeh: “Get out of here, enough with the interviews. You ruined the city for us... There wasn’t a single Jew here today. Not even one!” Bottom line: The incitement by Arab politicians, the radicalization in its wake, the terrorist frenzy this breeds and ensuing protests in support of the terrorists are bad for business. Thriving businesses are not the interest of a select few. They provide the livelihood that sustains many Arab communities, including the largest one in Nazareth.Quite predictably, Salem was soon castigated by the politicians who inflame passions in the Arab communities.He was denigrated as the traitor that he isn’t. Nothing was allowed to interfere with the raking in of political capital from the premeditated escalation of a synthetic crisis.Thankfully, the majority of Israel’s Arab citizens are not fooled by those baldfaced attempts to stoke the flames.We think that Salem and people like Israeli-Arab journalist Lucy Aharish represent the real face and voice of the Israeli Arab community.Aharish boldly spoke out on the airwaves last week, castigating the Palestinian leadership and the rash of stabbing attacks against Jews throughout the country, and signing on a petition by leading members of the Israeli-Arab community condemning terrorism and speaking of the need for coexistence.“Even if the status quo at al-Aksa has been violated – which it hasn’t – does that make it legitimate for someone to kill someone else?” she passionately called out.Before they heed another call for a general strike, Israeli Arabs should remember a chapter from the past. In 1936, at the instigation of Nazi-collaborator Haj Amin al-Husseini, a general strike in the Arab sector lasted for 175 days. In many cases it was enforced by intimidation.In the end, it took international intervention to extricate the Arabs from their own strike. Thousands of Arab merchants, shopkeepers, small manufacturers and farmers were driven into bankruptcy and numerous more lost their jobs.If this economic war was geared to strangle Jewish subsistence in this country, the opposite occurred.The Jewish economy flourished as never before and a nascent Jewish state emerged from the havoc.Yet the lesson of that seminal disaster had to be painfully relearned time and again.Israel values its Arab citizens, and it’s time that more of them follow the path that visionaries like Salem and Aharish are forging.