The end of the Jewish community in Yemen can be placed in the context of a larger trend, the increasing intolerance within the Arab-Muslim world for minorities. 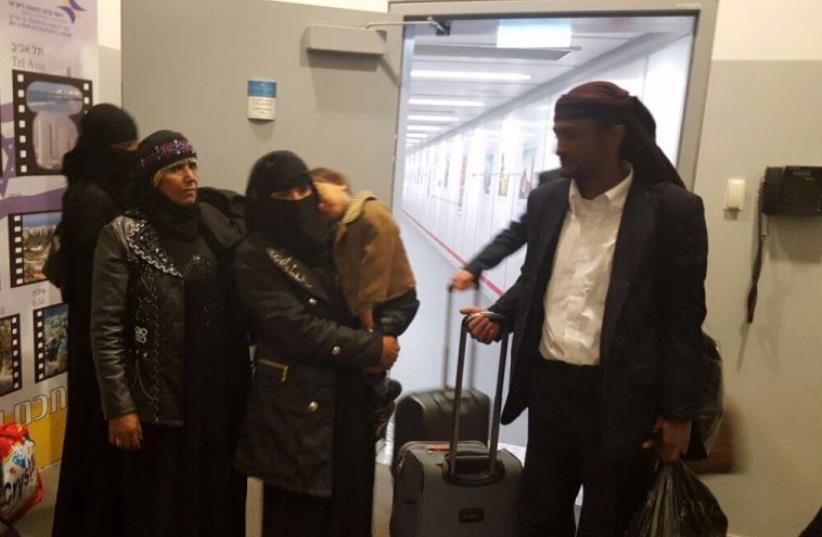 Final group of Yemenite Jewish immigrants arrives in Israel
(photo credit: ARIELLE DI-PORTO FOR THE JEWISH AGENCY FOR ISRAEL)
Advertisement
Sadness was mixed with joy this week as two millennia of uninterrupted Jewish presence in Yemen came one step closer to ending and another group of Diaspora Jews came home.A covert operation brought 19 members of the dwindling Yemenite Jewish community to Israel, leaving about 50 Jews remaining in war-torn Yemen. But they have expressed no interest in making aliya. Most are concentrated in a close compound adjacent to the US Embassy in Sanaa and enjoy the protection of Yemeni authorities.The story of Jews in Yemen is reaching an end.According to one legend, Jews first reached the country when King Solomon sent Jewish merchant marines to Yemen to search for gold and silver to adorn the Temple in Jerusalem. Another legend has it that Yemeni tribes converted to Judaism after the Queen of Sheba’s visit to King Solomon. The Jews of Sanaa have a legend that their ancestors settled in Yemen 42 years before the destruction of the First Temple. Archaeological records referring to Judaism in Yemen date back to the Himyarite Kingdom, established in Yemen in 110 BC.The Yemenite Jewish community is undoubtedly one of the oldest in the Diaspora. Though there were many periods when Yemenite Jews were isolated from other Jewish communities, they continued to remain faithful to Jewish tradition while developing their own unique customs.There is a certain sadness in the realization that this long illustrious history is coming to an end. We are living in an era in which the Jews of the Middle East, who have histories that stretch back further than practically any other identifiable group are unsafe anyplace but in Israel.The ancient Jewish communities of Syria and Iraq are no longer. Now Yemen is following the same path.There is a real concern that pilgrimage sites, holy burial sites, cemeteries, synagogues and Jewish quarters will be forever closed even if they are not destroyed by Islamic State or other nihilistic Islamists.At the same time, one cannot help feeling excitement and joy as yet another group of Jews has finally returned home.The ingathering of the exiles predicted by the biblical prophets is coming true. Ancient diasporas are emptying of their inhabitants and are coming up to the Land of Israel.Today, the emigration of Yemenite Jewry is not tainted by the ideological battles that were played out in Israel shortly after its establishment. Yemenite Jews, as well as traditional Jews from other diasporas, are no longer forced to conform to a secular Zionist credo that sought to strip newcomers of their “exile mentality” and re-educate them. They can continue the customs they bring with them, enriching and diversifying the Jewish collective in Israel.Operation Magic Carpet, which began in 1949, is the most famous instance of Yemenite Jewish immigration to Israel. However, the Yemenite community’s connection with the Land of Israel dates back much further.Documents in the Cairo Genizah relate that Yemenite Jews had ties with the Jews in the Land of Israel during the medieval period, as Aryeh Tepper noted in a 2011 essay in Jewish Ideas Daily. Rabbi Ovadia Bartenura, a leading 15th-century jurist, also mentioned the aliya of Yemenite Jewry.Immigration to Israel continued up through the 20th century. Between the two world wars, approximately 15,000 Yemenite Jews arrived in Israel – a remarkable figure since the Zionist movement was only beginning to set up shop in Yemen at that time.It reflected the yearning for Zion that deeply resonates in the heart of every Jew with a strong connection to Jewish tradition.The end of the Jewish community in Yemen can be placed in the context of a larger trend, the increasing intolerance within the Arab-Muslim world for minorities – whether they be Berbers or Kurds or Christians or Jews. At the same time, it emphasizes the importance of the Jewish state as the homeland for a diverse mix of Jews from around the world who face anti-Semitism or assimilation – or simply wish to return home.