We need to bring in more people from the outside, and to work harder to keep the Jews we have. 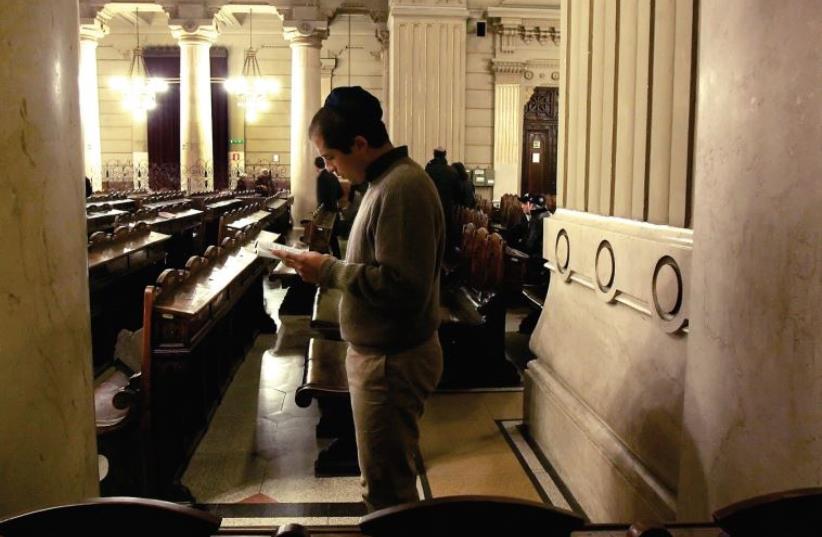 A MAN prays in Rome’s synagogue in 2006. Jewish demographics have many good tidings, the author argues.
(photo credit: REUTERS)
Advertisement
There’s always good as well as bad news. Recent decades have seen us so depressed by external events that we have had no time to be impressed at any positive development. We’ve been so concerned with the bad news that we have hardly registered the good. But for Jews everywhere, there is actually good news. Many aspects of Jewish life are flourishing, and they include population statistics. Where hitherto it’s been fashionable to complain that we are a disappearing species and the world Jewish population has not returned to its pre-1939 figure, it was recently calculated that our numbers are in fact approaching the 1939 vicinity and are verging on 16 million and rising. The loss of six million Jews in the Holocaust still haunts us, but 70 years later our numbers are creeping up.To set the scene let’s record that in 1700 there were probably no more than a million Jews in the whole world. By 1800 we were a larger group, amounting to about 2.5 million, by 1900 we were about 7.5 million and by 1939 that number had doubled again. Maybe because most Jews lived in more or less settled conditions in Europe and the US, the fertility rates among Jews were relatively high, because medicine and health advances had improved people’s survival prospects and longevity.The figure went down drastically because of the Holocaust, but now we are growing again. Obviously no-one can be certain of any of the figures, and much depends on how you assess whether a person is Jewish. The demographers are entitled to argue about the statistical details, but I believe the trends are clear, and we are not diminishing to a dangerous level.The epicenters have changed. The largest Jewish center is no longer Europe (formerly almost 90 percent of world Jewry, now maybe 10%) but Israel, with the United States a bit behind. Most of the once-flourishing Middle Eastern and Asian countries (with the exception of Israel) have declined radically, though in a few places Jews are quietly coming out of the woodwork. France is now the largest European community, Russia is far behind, and a range of African countries are left with no more than a token Jewish presence.We are still not a large people in global terms, but this was always the case: already in ancient times the Torah said, “you are the least of the peoples” (Deuteronomy 7:7). We can hardly believe our eyes when we see a contrary picture elsewhere in the Torah: “Behold, the people that left Egypt have hidden the face of the earth from view” (Numbers 22:5) – what a dream! If we were that numerous, not just a tiny minority group, Jewishness would be totally different.We would of course have had more Jews if there had not been such losses from drift and desertion, assimilation and apostasy, pogroms and persecutions. These days we could still grow considerably if we raised our birthrates. Someone recently told me regarding Australia (today the 10th largest Jewish community) that in Melbourne if you’re rich you have two children, if you’re poor you have three, and if you’re ultra-Orthodox you just keep on going. The fact is that – in Australia and everywhere else – we owe thanks to the haredim who, with their large families, are not only maintaining Jewish numbers but increasing them, and of course with more haredi births comes an increase in Jewish commitment and knowledge, and a decline in intermarriage.The Jewish people would also grow if we accepted more converts, and there is a good case for encouraging outsiders to find themselves a place within Judaism and the Jewish people. Factors that militate against population increase include birth control, which is widely practiced by Jews – especially when people are highly educated, live in urban conditions, and with increasing sexual emancipation among women.Even if we can raise the birth rate and encourage conversion, we are not likely ever to be other than a minority people. Not that this is necessarily bad news. We don’t have to weep about it. The legal luminary A. L. Goodhart once argued that there actually was an advantage in being a minority. There were three reasons: a minority has courage to be different; it does not see the status quo as the only or best option; it thirsts to make the world a better place – it cannot afford the luxury of sitting back passively and leaving it to others to forge ahead.When space travel developed, some religious leaders argued that the skies belonged to God and human beings had no right to challenge His rule. There was a localized version of this argument in my former community of Sydney. A strange legal provision allowed the Great Synagogue to sell some of the air space over the synagogue to allow a developer to add more stories to other downtown buildings, and though the majority of the congregation approved one lady objected: “We can’t sell it – it belongs to God!” When critics objected to space travel because it meant venturing into God’s territory, the then Soviet leader, Mikhail Gorbachev, snapped, “How many legions does God have?” Good rhetoric, but not necessarily a valid argument. A people can live without legions provided it has a fierce commitment to its ideals and its destiny.What this statement implies is that for Jewish survival the criterion is not just physical but psycho-cultural. Jews will survive if they decide and are prepared to do so. Once upon a time there was a saying that ran, “No sex please, we’re British!” For us the slogan has to become, “More children please, more Judaism please: we’re Jewish!” And we need to bring in more people from the outside, and to work harder to keep the Jews we have.

The author is emeritus rabbi of the Great Synagogue, Sydney.
Advertisement
Subscribe for our daily newsletter