I’m a member of the family. And I have the cards to prove it. 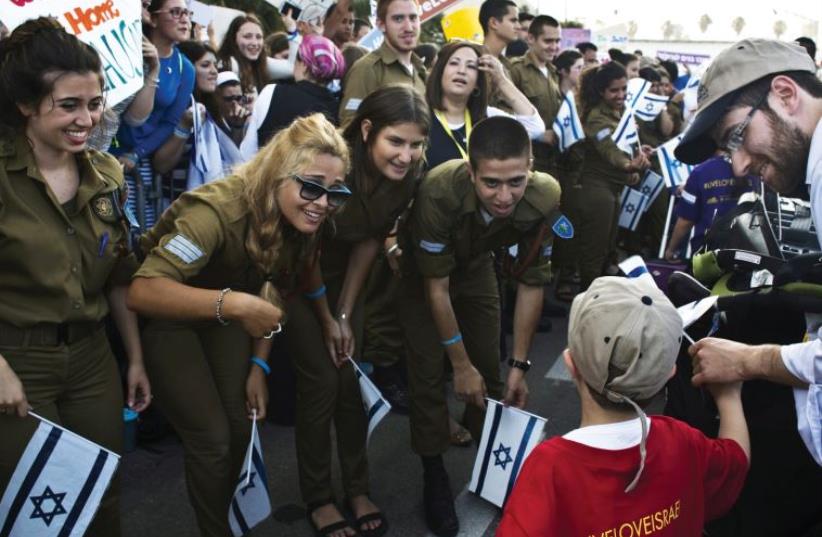 NEW OLIM arriving at Ben-Gurion Airport
(photo credit: REUTERS)
Advertisement
After the reams of paperwork, months of planning and packing, and flying halfway across the world on one-way tickets, my family’s dream of aliya became a reality. But our status wasn’t official until, in a muggy, run-down room inside the old arrivals terminal at Ben-Gurion Airport, my husband and I were handed unassuming blue slivers of plastic: our Teudat Zehut (ID) cards. Cue the music – we were finally real Israelis! You’d better memorize those numbers, our aliya rep advised, because you’ll be asked for them all the time. She was right, and soon the nine digits that had made me a citizen were spilling off my tongue.What a contrast from the American system, where we’d guarded our Social Security numbers with our lives – for good reason, as fraud is rampant – and certainly didn’t rattle them off at the checkout counter in the supermarket.As I quickly learned, my T.Z. card was to be the first (and most important) of many that would soon populate my wallet. Because in Israel there’s a club for everything, and a card to go with it.Rebar? Drink up! Sushi Rehavia? Betayavon! The four different natural food stores I frequent near our home in the German Colony, each with its own coveted imports and monthly sales? To your health! Fox, The Children’s Place, Golf...everybody needs clothing, right? And the list continues. I’m up to about 10 cards now, a far cry from my sister’s 20-something, but then she made aliya 15 years ago.You can tell how long someone’s been here by the number of clubs they’ve joined.It seems as though every store here has its own club and everyone’s invited – no admissions committee to impress, no white shoes required. Just call it the “Mo’adon (club) Nation.”In the States, store clubs are few and far between. Your favorite coffee bar might be happy to have your business, but they’re not giving you free drinks no matter how many cappuccinos you buy. Most large retail chains (clothing, furniture, department stores, etc.) offer branded credit cards, but those are generally not worth the plastic they’re printed on. Other than a one-time discount when you open the account and early access to special sales, the only thing you rack up are sky-high interest payments.The one sector that does offer club cards in the US are the ubiquitous big-name drug stores, whose cards (and I had all of them) confer meaningful discounts and allow you to earn points toward free merchandise. And this is valuable, because in the US, drug stores sell everything – household items, beauty products, toys, small electronics, school supplies, greeting cards and more. Here, SuperPharm keeps trying to get me to sign up for its “LifeStyle” credit card, but I’m waiting for them to come out with a plain old mo’adon card.I am not an economist, so I can’t scientifically explain the preponderance of store clubs here. Of course, it’s business; the mo’adon is mainly a marketing tool. But I think its popularity has a cultural underpinning as well. Small country that this is, with perhaps four or five degrees of separation between individuals rather than the proverbial six, Israelis, it has often been said, are like a family. Boisterous, nosy, prone to arguing, but caring and giving and ultimately willing to take a bullet to save a brother. So every store wants to give you the equivalent of a friends-and-family discount. Come on in! Join us! You’re family! That’s not to say that the mo’adon comes without strings attached. Most charge a fee, but if you are a regular customer that is quickly offset by the benefits. I’ve already taken home a free dress for my daughter at Fox, and a free shirt for my son at the Children’s Place, just from racking up points. And of course, my free drinks at Rebar always taste just a little bit better than usual.Thanks to the all-important T.Z., there’s no need to actually carry around the actual club cards. All you need to do is give the store clerk your I.D. number. So why am I still weighing down my already over-loaded handbag with all those cards? As a recent immigrant, these humble cards make me feel like I have arrived as a member of Israeli society. If a wallet can identify a person – not under morbid circumstances, God forbid, but as a sociological cipher – then I want mine to proclaim that I am a proud, and yes, discount-loving denizen of the Jewish state. I’m a member of the family. And I have the cards to prove it.The writer made aliya last summer from New York to Jerusalem with her husband and three children. She is a freelance writer and editor who qualified as an attorney in the US, and has previously worked as a court attorney and magazine editor.