The law does not prohibit the sale of hametz, but rather its public display during the holiday. 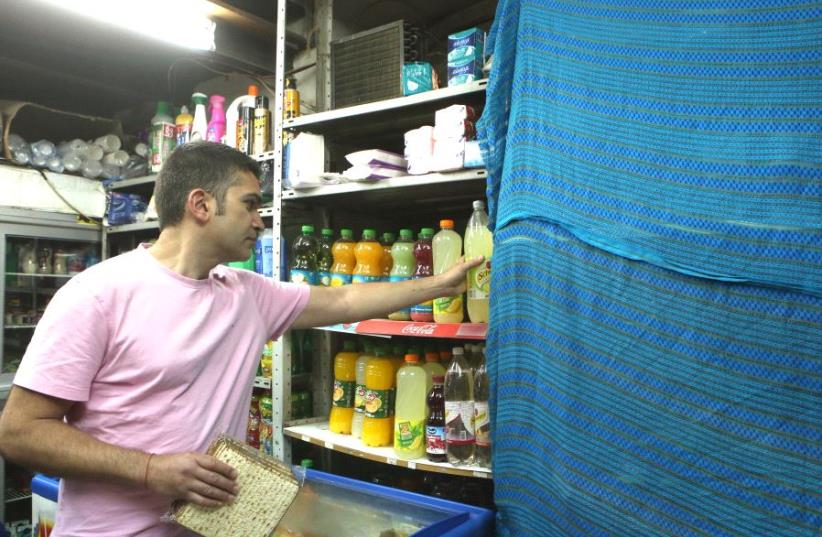 Hametz is covered at a store in Israel
(photo credit: MARC ISRAEL SELLEM)
Advertisement
With the Festival of Freedom about to conclude, some of the Jewish state’s politicians have found no better a time to revive a long-ignored debate over the so-called Hametz Law of 1986.This is not to be confused with the lively discussion of Passover traditions at the Seder table, but rather a forward-looking attempt to ensure that the Jewish state remains the “only democracy in the Middle East” that we are so justly proud of.Meretz MK Tamar Zandberg last week announced her intention to submit a bill to revoke the law, saying it undemocratically prohibits the sale of hametz (leavened products) in Israel during Passover. While she may be commended for her attempt to defend Israel’s freedom of worship, the law does not prohibit the sale of hametz, but rather its public display during the holiday.“Whoever wanted to refrain from eating hametz on Passover was able to do so even before the law was passed in 1986, and will be able to do so also after it will be canceled,” she said. She argues correctly that the revived debate over the law is part of an escalating process of religious radicalization by the ultra-Orthodox with the aim of dictating religious observance.In one egregious example, this crusade has so far blocked enactment of the cabinet decision in January 2016 to create a section for egalitarian worship at the Western Wall, a move heralded by the majority of the world’s Jews who are not Orthodox, particularly in the Diaspora.In a typical knee-jerk response, Shas MK Yoav Ben- Tzur called Zandberg’s initiative “dangerous” and “yet another attempt to harm the Jewish character of the State of Israel, the status quo and the unifying common denominator of the entire people of Israel.”Such Shas rhetoric is characteristic of the fundamentalist view, shared by its coalition partner United Torah Judaism, that declares Reform Judaism anathema. It is to Israel’s ongoing disgrace that our curious form of government allows the imposition of Halacha as the law of the state rather than the freedom of worship optimistically proclaimed in our Declaration of Independence.Ben-Tzur is sadly mistaken in thinking that Zandberg and other Jews who favor the freedom to choose their level of observance are trying to harm the Jewish character of the state. Surveys over the past decade have shown that Israel’s population is almost evenly divided between those who choose more stringent religious observance and those who choose to ignore it, and this is actually what constitutes the Jewish character of the state.A 2012 Ynet-Gesher survey indicated that a clear majority of Israel’s Jewish population, from every sector, does not eat hametz on the seven days of the festival.This is the way Israelis choose to respect certain Jewish traditions, just as people refrain from driving on Yom Kippur out of respect for religious sensibilities, not out of coercion.The survey revealed that some 70% of Israel’s secular Jews believe that the law is unnecessary, with a similar number naming social norms and individual rights as the reason for their response. Not surprisingly, 76% of traditional respondents, 83% of Modern Orthodox and 95% of haredi respondents believe the law is necessary.Dr. Yehuda Ben-Meir, a former MK of the defunct National Religious Party and Bar-Ilan University lecturer, has noted that “religious Zionism recognized that it was impossible, and forbidden, to impose Jewish edicts on citizens by legislation.” What it did try, he wrote, was to take steps to ensure the state’s Jewish character.This principle is what guided Israel to pass the 1951 Work and Rest Law, which established the Sabbath and Jewish holidays as state days of rest. No one, though, ever thought to ban driving on Shabbat.The law’s wording is precise: “A business owner will not put a hametz product on public display.” There is no ban on selling hametz or serving it, only on displaying it in public.Provided it is more carefully worded, Zandberg’s bill should be supported as part of the effort to keep Israel both Jewish and democratic.