Historians, Jewish or otherwise, should be able to understand Zionism as the national liberation movement of the Jewish people and stop denying Israel’s right to exist. 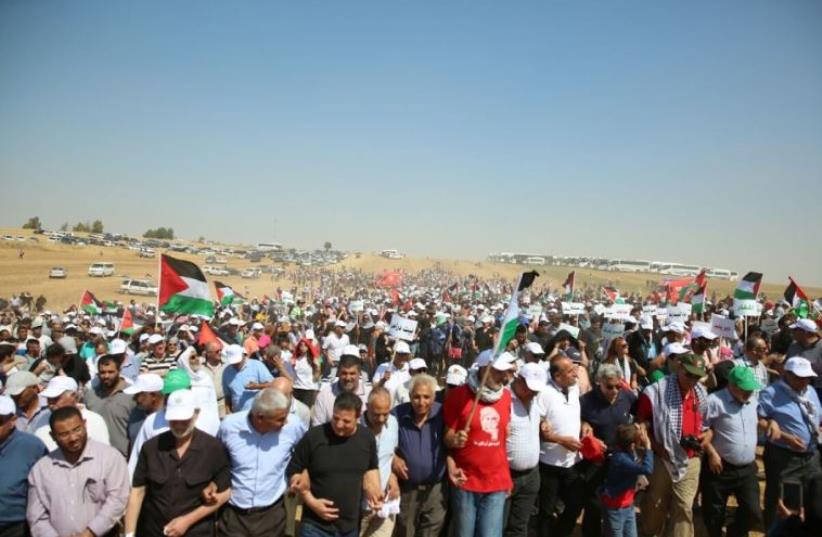 Participants attend a rally commemorating the Nakba
(photo credit: JOINT LIST)
Advertisement
Is there a difference between an historian and a Jewish historian? The storm of criticism unleashed last week by the confessions of two academics who virtually renounced their previous identification with Israel suggests that the operative distinction has more to do with an irrational self-loathing than with scholarship.Professors Hasia Diner and Marjorie Feld published an anti-Zionist screed in Haaretz dissociating themselves from a previous identification with Zionism, which has become associated in their understanding with racism, genocide and apartheid, just to cite a few of Israel’s alleged crimes.Diner begins her anti-Zionist rant with a simple confession: “The Israel I once loved was a naïve delusion.” What a distance she has traveled from the Habonim Zionist movement of her youth to today, as she writes, “I feel a sense of repulsion when I enter a synagogue in front of which the congregation has planted a sign reading, ‘We Stand With Israel.’” Diner writes that she could not endorse the Jerusalem Program, because it affirms belief in “the centrality of the State of Israel and Jerusalem as its capital” for the Jewish people. This, she writes, is because it encourages aliya and “the classic negation of the Diaspora and as such the ending of Jewish life outside a homeland in Israel.”Straying further into the realm of the absurd and nonfactual, she declares, “The death of vast numbers of Jewish communities as a result of Zionist activity has impoverished the Jewish people.” What deaths of which Jewish communities? Israel, she concludes, is “a place that I abhor visiting, and to which I will contribute no money, whose products I will not buy, nor will I expend my limited but still to me, meaningful, political clout to support it.”Sovereign Israel cannot choose to absorb Jewish refugees and grant them citizenship, Diner states, because “The Law of Return can no longer look to me as anything other than racism.”Feld is no better, writing how she learned from non-Jews in “liberal and left organizations in college” who opened her eyes. “I saw that Israel fit neatly into my broader understanding of Western colonialism.... The founding of Israel was the Nakba, the great catastrophe, for Palestinians, with ethnic cleansing, destruction, and no right of return.” She apparently sees no contradiction in the UN Partition Resolution of 1947 creating an Arab and Jewish state which was accepted by the Jewish community and violently rejected by the armies of half a dozen Arab countries.Diner is a professor of American Jewish history at New York University and won an award for her book We Remember with Reverence and Love: American Jews and the Myth of Silence after the Holocaust, which dealt with the subject until 1962; Feld is professor of history at Babson College and the author of Nations Divided: American Jews and the Struggle over Apartheid, which dealt with the response of US Jewry to the 1990 visit by Nelson Mandela.There has been a deluge of outraged responses to Diner and Feld’s op-ed, but probably the most authoritative were given by two fellow historians, one American and one Israeli and both of them Jews. Preeminent Brandeis historian Jonathan Sarna accused Diner and Feld of falling into a belief in “demonic” myths about Israel and said they “sacrifice truth to advance their newfound ideology.”“Diner and Feld’s current view is at least as much a ‘naïve delusion’ as the earlier one that they rejected,” he wrote. “Sadly, instead of drawing serious, nuanced, scholarly lessons from history, they have provided us with just what they claim Israel’s supporters once gave them: propaganda.”Gur Alroey, a professor and director of the Ruderman Program for American Jewish Studies at the University of Haifa, wrote, “Prof. Diner’s historical arguments are incorrect and unfortunately also unfounded. I fear her political agenda led to a distortion in understanding Zionist and Israeli society’s history, going so far as a complete denial of Israel’s right to exist as a Jewish and democratic state. Her ideological observations on the story of the establishment of Israel brought her to erroneous conclusions and to distort modern Jewish history.”Historians, Jewish or otherwise, should be able to understand Zionism as the national liberation movement of the Jewish people and stop denying Israel’s right to exist.