A Palestinian draft of a resolution for statehood would have the UNSC state its opposition to Israel’s settlement activity in the West Bank. 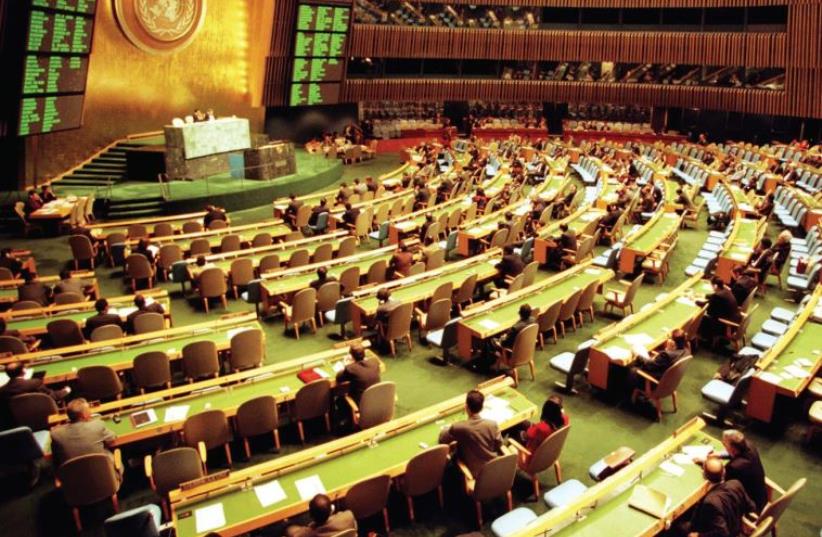 THE UN General Assembly in the 1990s, when the ‘Zionism is Racism’ resolution was repealed.
(photo credit: REUTERS)
Advertisement
At least two resolutions hostile to Israel are currently slated to be presented to the United Nations Security Council – possibly as soon as April 22, when Palestinian Authority President Mahmoud Abbas is in New York for a high-level signing ceremony for the climate agreement reached in Paris in December.This time there is real concern in Jerusalem that the US will not use its veto power to torpedo the resolutions.A Palestinian draft would have the UNSC state its opposition to Israel’s settlement activity in the West Bank. The Paris-led initiative would have the UNSC force on Israel the parameters of a two-state solution. Both are counterproductive to peace, because they place the blame for perpetuation of the conflict on Israel while ignoring Palestinian aggression, and they undermine the principle that only through open dialogue and negotiations – not unilateral actions by outsiders – can Israelis and Palestinians hope to resolve their differences.Though the proposed resolutions will do nothing to promote peace, but will only serve to strengthen Palestinian intransigence and encourage Palestinian terrorism, there is growing concern that the US will permit one or both to pass if they come up for a vote.Unlike the last time Israel faced a hostile resolution in the UNSC in December 2014, this time it is almost certain the Palestinians will succeed in garnering the required majority.In order to bury the resolutions, the US would be forced to go out on a limb and use its veto power.Since 2014, the makeup of the UNSC has changed in the Palestinians’ favor. The US thus remains the only member that could potentially bury the resolutions. But to do so US President Barack Obama would have to take a stand.There are signs he is reluctant to take such a step. On Monday, during a speech before Jewish lobbying group J Street in Washington, US Vice President Joe Biden acknowledged “overwhelming frustration” with the Israeli government and said the systematic expansion of Jewish settlements is moving Israel toward a dangerous “one-state reality” and in the wrong direction. He added that the United States has an obligation to push Israel toward a two-state solution to end the conflict between Israelis and Palestinians. Biden’s comments undoubtedly reflect that of the White House.If Obama were to permit passage of the resolutions, he would not be deviating from the policies of previous US presidents. In fact, as Lara Friedman, director of policy and government relations for Americans for Peace Now pointed out in a recent oped for The New York Times, since 1967, every other American president allowed, or even had America vote for, UNSC resolutions taking Israel to task for building Jewish communities in Judea, Samaria and Gaza or for the way it battled Palestinian terrorism.However, we wonder whether members of the Obama administration have taken into consideration the negative ramifications of yet another lopsided UNSC resolution singling out Israel for special condemnation.Such as move would only further strengthen Palestinian intransigence. If the UNSC and international pressure can be mobilized against the Jewish state, why should the Palestinians agree to enter into negotiations that would require Palestinian concessions? Passage of resolutions that ignore Palestinian terrorism – the six-month-long stabbing intifada, Monday’s bus bombing that wounded 21 and the uncovering of yet another Hamas tunnel to name just a few examples – would encourage even more terrorism. Indeed, the implication is that Palestinian terrorism is justified in the face of Israel’s continued settlement activity. At the very least, Palestinians rest assured they will pay no price in the international community for continuing to resort to violence.The US should insist the UNSC adopt a resolution criticizing Palestinian actions that undermine peace: From the PA ’s chronic corruption and trampling of human rights to the broad support among Palestinians for Hamas, a terrorist organization that rejects the State of Israel’s right to exist; from the split in Palestinian leadership between the West Bank and Gaza to the PA -sponsored incitement that glorifies terrorists who carry out knifings, car-rammings, shootings and bombings against Israelis.It is not easy take an unpopular stand in international forums. Obama could justify not issuing a veto by claiming he is doing what he believes to be best for Israel. But ignoring Palestinian terrorism will only encourage more of the same, pushing peace further out of the reach than ever.