I image that Pablo Picasso was right: “Everything you can imagine is real.” 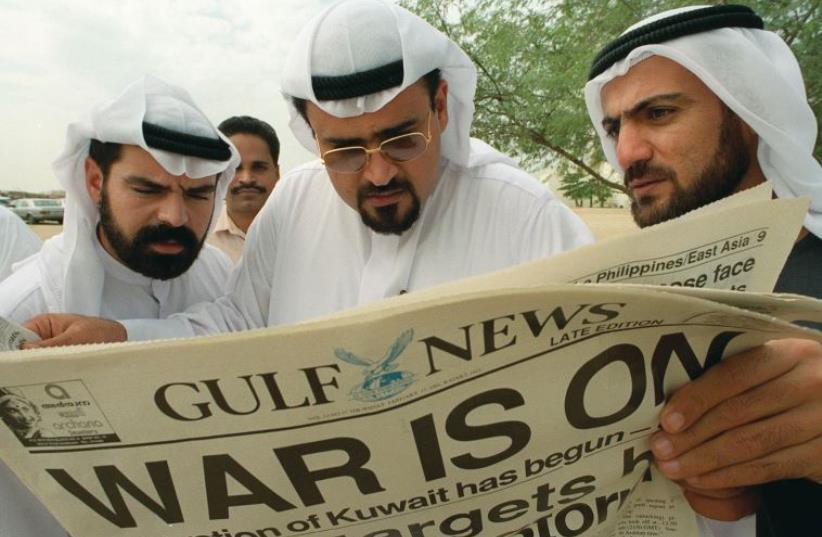 Kuwaiti exiles read a local newspaper announcing the start of the Gulf War in Dubai on January 17, 1991
(photo credit: REUTERS)
Advertisement
In 1973, at the height of the Yom Kippur War, I was a fairly new immigrant working in a large defense company in Rehovot. For the first week or so, the war had seemed far away from Rehovot, but early one morning the air-raid sirens started their gut-wrenching squeal. We dropped everything and rushed to the company bomb shelter, a large underground structure with room for all 300 employees.It was a new experience for me. The last time I had been in a bomb shelter was in war-torn London and I was only six months old. I stood amongst my colleagues, with my back to one of the walls and, after waiting anxiously for a few minutes, I heard the crump of the falling bombs and, to my surprise, felt the shelter wall move. The movement was not much, but the quick up-down jump of a supposedly solid concrete wall was, to say the least, unnerving.After a short wait, the all-clear sounded and we climbed back out of the shelter.The sight that met my eyes was simply astonishing – absolutely nothing had happened, there was no fire, no smoke, no damage. A little later we learned that it had been a false alarm; there had been no air-raid and no bombs.The sound of the bombs, the movement of the wall, had been the product of my overworked imagination.Last month it was 25 years since the end of the First Gulf War. After several weeks of will they, won’t they, we were woken in the early hours of the morning by a call from a friend – “It’s started, the Americans are bombing Baghdad,” he said. Just a few minutes later, the sirens sounded.Once again I found myself in a bomb shelter. This time it was my own kitchen.Following instructions from the Civil Defense experts, I had converted it into a place of shelter and safety by sticking some plastic sheeting over the window and putting a water-soaked anti- gas cloth at the bottom of the door.“Are we really safe here?” asked my wife, “The walls are not very thick and we have a very big window.”“Oh. Just use your imagination. Imagine that we are in an underground bunker. We should be OK.”We put on our gas masks, and feeling not a little ridiculous, sat round our emergency radio waiting for instructions.They were quite clear “Drink water.”We could hardly talk to each other through the cumbersome masks; drinking was out of the question. My three kids looked at me for guidance, suddenly I had an idea.“Imagine you are drinking water.” We were soon making slurping sounds and feeling like good citizens, obeying the instructions from the Civil Defense. I never told anyone that I had imagined drinking whiskey, not water.We all heard the crump, fortunately in the distance. It later turned out that a Scud missile had hit Beit Dagon, quite a way from Rehovot.“It’s just your imagination.” I told my kids, “Nothing to worry about.”“But, Daddy, Dusty [our beloved family dog who was sharing the safety of our shelter with us] has heard it as well.”“Well, that just shows that even dogs have imagination.”I spent a lot of time in my sealed room, gas mask at hand, waiting for the sirens to announce the arrival of the next missile. Work had, more or less, come to a standstill and all the usual distractions were out of the question.I needed to cheer myself up. Looking around my office, converted to a bombproof, gas-proof, safe haven by the addition of a piece of thin plastic sheeting, the only thing that stood out was a pile of fresh writing paper and a couple of well-chewed pencils. The answer was obvious – I had everything needed to write a book.A few months ago, I dusted off that old typewritten manuscript, updated the story to reflect the 25 years that had passed, and turned it into an electronic e-book. Encouraged by my e-book’s success, I am now writing the second Len Palmer Mystery.That war ended, but in the 25 years that have passed we have had a lot more.Now our air-raid shelter has to be large enough for our six grandchildren – just imagine that! As I look around me, the world does not seem to have become a safer place than when I was taken into the London bomb shelter. We, on the “island” of Israel, are surrounded by unimaginable chaos and savagery. Our neighbors slaughter each other on an almost unknown scale. But, as I grow old, my imagination is still working – I imagine a large underground bomb shelter that is now used to grow mushrooms. I imagine a world where sirens only announce the arrival of Shabbat, not a gas-filled Scud missile. I imagine using my gas mask only when I spray the fruit trees in my garden. I imagine catching a train from Rehovot all the way to Paris.I image that Pablo Picasso was right: “Everything you can imagine is real.” The writer is a retired physicist. His overworked imagination has created a novel, Snow Job – a Len Palmer Mystery, available for Amazon Kindle.