A war of ideas against Islamic supremacism is imperative. 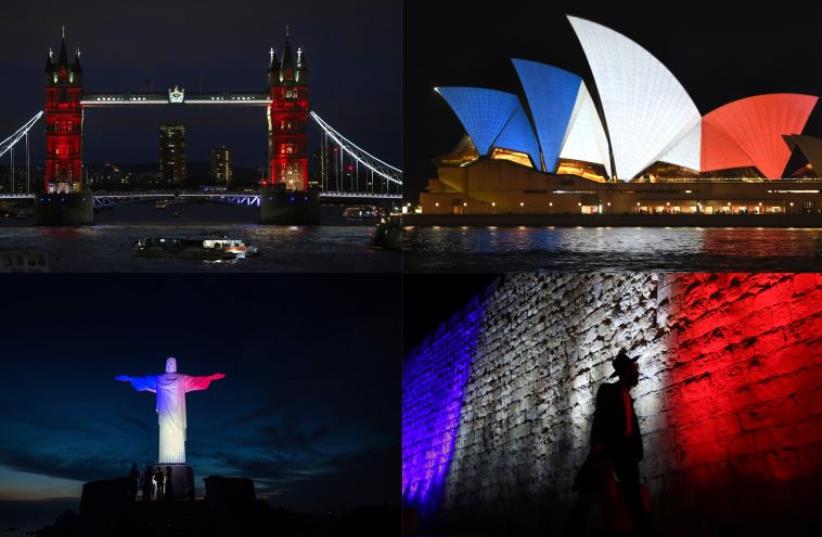 Je suis Paris
(photo credit: DSK / AFP)
Advertisement
History teaches us that the fearless defeat the feeble. The faithful overcome the fickle. The rooted rout the irresolute.Let’s face it: Radical Islam of the 21st century is deeply devoted and daring.It is driven by intense religious-fascist fervor, and a purist-apocalyptic vision of a global caliphate takeover. It is drawing upon reservoirs of civilizational discontent and simultaneously brimming with confidence. It is on the attack.Such frightening single-mindedness, coupled with the murderous modern technologies of warfare, is a winning formula for an Islamic overwhelming of the West. It’s a jihadist juggernaut that seems almost unstoppable.Fighting back and preventing Islamic jihadist attacks like the Paris massacres of last weekend will require much more than a broad Western intelligence coalition or intensified attacks on ISIS and al-Qaida in Syria and Iraq. It will require a renewed Western resolve that can only come from profound intellectual and moral rearmament.Unfortunately, Western society, and especially European society, is a terribly weakened edifice. Like the Roman Empire in the fifth century, moral and political malaise has critically infected Western mores.Western nations have grown decadent in their malls and stadiums – as Niall Ferguson, the Tisch professor of history at Harvard, wrote a few days ago. Their universities teach a tremendous “lot of nonsense to the effect that nationalism is a bad thing, nation states worse, and empires the worst things of all.”The erudite American Catholic historian and theologian Prof. George Weigel roots the decline of Europe in its Christophobic culture, and calls this “the collapse of a transcendent horizon of moral judgment in public life.”He reminds us that the “deepest currents of history are spiritual and cultural, rather than political and economic….History is driven, over the long haul, by culture – by what men and women honor, cherish and worship; by what societies deem to be true and good and noble; by the expressions they give to those convictions in language, literature, and the arts; by what individuals and societies are willing to stake their lives on.”But the atheistic humanism, moral relativism, sanctification of personal choice, worship of wealth, and criminalization of military power that has engulfed the high temples of Western thought has led to a profound, long-standing crisis of civilizational morale.The mental eclipse of many Western intellectuals and leaders, again especially in Europe, is so desperate that they don’t have any fight left in them. Their avowedly complacent and “peace-loving” principles leave the West easy prey for violent minorities with primitive, but evocative, ideological passions behind them.Without a clear idea to fight for, Europe and the West cannot be victorious over radical Islam. Heck, Europe is losing the war without firing a single shot – just by dint of its low birthrates. A continent whose population is dwindling is a continent that lacks belief in its own future. It is a society that escapes to individualist self-fulfillment rather than seeking the common good that justifies the sacrifices entailed in bringing children to the world.Rabbi Dr. Jonathan Sacks, the most prolific Jewish theologian of our day, reminds us that the best and main Western defense against radical Islam lies not in the “pitiless vengeance” that French President Francois Hollande called for this week (although that is clearly a necessary component of Western self-defense).“We need military weapons to win the war against fanatics like ISIS,” Sacks writes. “But we need ideas to establish a lasting peace.” Unfortunately, Sacks says, we live in a century that “has left us with a maximum of choice and a minimum of meaning.” The secular substitutes for religion – materialistic nihilism, nationalism, racism and political ideology – all have led to disaster.A war of ideas – a war against Islamic supremacism – is now imperative. Sadly, it’s a war that cannot be fought and won successfully unless the West re-grounds itself in core values and identity commitments that stem from the Judeo-Christian religious and democratic traditions. It cannot be won if the weightiest response to the Paris attacks is re-population of the bars and bistros of the 10th and 11th arrondissements.It’s also a war that cannot be won when leaders are afraid to identify the enemy.This is not a war of “humanity” against nameless and identity-less “terrorists” – as Barack Obama, Francois Hollande and David Cameron would have us believe. It is not a war that stems from undifferentiated “poverty, frustration and despair.”Nor is it a war led by “lone wolves” or “psychopaths.”It is a war against “Islamofacism,” as the French Jewish philosopher Bernard-Henri Levy courageously wrote this week. Give the enemy a name, he wrote. Call a spade a spade. Acknowledge its true nature. It is not a war against Islam or most Muslims, mind you, but it is a war against radical Islamic jihadism, and it is civilizational in nature.All the malaise and moulder that cobbles the West in confronting Islamofascism was on display at President Obama’s prickly press conference in Turkey this week. He aggressively refused to face reality – “the attackers in Paris had nothing to do with Islam” – and couldn’t get truly angry at the terrorists. Instead, Obama was mostly upset at his Republican critics, who want him to declare war on Islamofacism.“I’m not interested in pursuing some notion of American leadership or America winning,” Obama snarled petulantly.“I don’t take actions that are, in the abstract, going to make America look tough, or make me look tough.”Therein lies the rub. For Obama, radical Islam is an invisible enemy. For Obama, “America winning” is an obnoxious concept.For Obama, “getting tough” runs up against his jaundiced view of Western civilization and rose-colored view of Islamic civilization. For Obama and many of his European colleagues, alas, the West may not deserve to win.