Kudos to Trump for ignoring McMaster

If reports are correct, McMaster told Trump last week that he should cease using the term “radical Islamic terrorism,” so as not to alienate Muslim-majority countries allied with the United States. 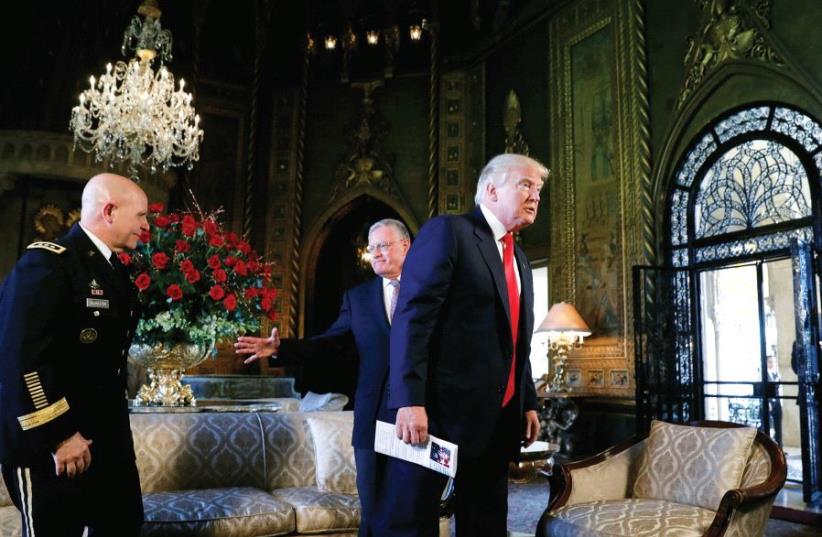 US PRESIDENT Donald Trump meets H.R. McMaster, his new choice for national security adviser.
(photo credit: REUTERS)
Advertisement
Despite his impeccable military and other credentials, US President Donald Trump’s national security adviser, Lt.Gen. H.R. McMaster, began his job – the one he got as a result of the resignation of Gen.Michael Flynn – with a whimper.If reports are correct, McMaster told Trump last week that he should cease using the term “radical Islamic terrorism,” so as not to alienate Muslim-majority countries allied with the United States.Some of us had argued, prior to Trump’s inauguration, that the only thing Americans and Israelis had to fear about the sui generis leader – if anything – was that he would end up more like his predecessor, Barack Obama, than the “alt-right” fanatic they were making him out to be.“He’s not a fascist, a racist or an anti-Semite,” I would say confidently, “but he was, up until recently, a member of the Democratic Party.”Once Trump started announcing his picks for cabinet and other positions, however, even the die-hard Republicans who initially froze in the fact of his leapfrogging over them to head their party thawed. Not only had the real estate magnate who talks from the cuff and shoots from the hip led them to sweeping victories in the House of Representatives and the Senate, but he began appointing real conservatives to top posts, including that of the Supreme Court seat vacated by the death of Justice Antonin Scalia.Flynn, whose staunch stance against Islamists in general and Iran particular, was among this group. But since he left almost as soon as he assumed his job, someone had to be found to replace him. That person was H.R.McMaster, and he also seemed to fit the bill perfectly.In his 1997 book, Dereliction of Duty: Johnson, McNamara, the Joint Chiefs of Staff, and the Lies That Led to Vietnam – written as a doctoral thesis – McMaster examined the failure of the White House and Joint Chiefs of Staff to provide a successful plan to defeat the North Vietnamese Army.“The war in Vietnam was not lost in the field, nor was it lost on the front pages of The New York Times, or on the college campuses.It was lost in Washington, D.C., even before Americans assumed sole responsibility for the fighting in 1965 and before they realized the country was at war,” McMaster wrote.It is thus odd that his first piece of advice to Trump was to suggest he tone down his rhetoric against the West’s sworn enemies, rather than coach him on how to put it into action.Much has changed since the Vietnam debacle, both politically and militarily, but one thing remains the same: democracies are always at a disadvantage when fighting rogue groups and states with no morals or rules of engagement.Even Israel, whose government and military have had no choice but to confront the often impossible task of killing terrorists without resorting to their methods, is often at a loss when it comes to asymmetric warfare. Still, it does not hesitate to identify and call its enemies by name.When Obama took office in January 2009 – two days after the end of Israel’s Operation Cast Lead against Hamas in Gaza – he made it his business to reach out to radical Islamists, rather than defeat them. This move was born out of a dim view of American power and accompanying belief that the US was hated by the mullah-led regime in Tehran and terrorist organizations like the Muslim Brotherhood with good reason.In keeping with this policy, Obama eliminated terms like “radical Islam” and “terrorism” from his administration’s lexicon. Indeed, the self-described “leader from behind” of the free world tried to alter reality with a pencil eraser – all the while working furiously towards inking a nuclear deal with Iran.The electoral ouster of the Democrats was due in large measure to the above.Why, then, would Trump’s national security adviser tell him not to mention it in his address to the joint session of Congress on Tuesday evening? Kudos to Trump for doing it anyway and reassuring us that he has no intention of emulating Obama.The writer is the managing editor of The Algemeiner.