‘Kumsitz’ at the movies 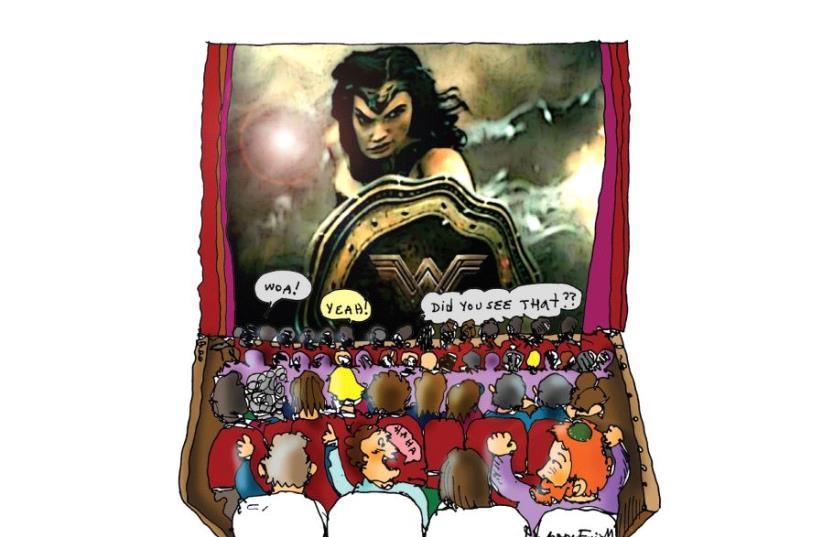 Art by Pepe Fainberg
(photo credit: PEPE FAINBERG)
Advertisement
Merrily married all these years to a mental health practitioner, I am nothing if not self-aware.That’s right, self-aware, or – as defined on one of those self-awareness websites – “having a clear perception of your personality, including strengths, weaknesses, thoughts, beliefs, motivations and emotions.”Get a grasp of those different aspects of your personality, the theory goes, and you can pave the way to personal happiness by understanding how your mind interprets events, and then reinterpreting those events so your mind takes you to a better place.In other words, you lead your mind, your mind doesn’t lead you.For instance, if the checkout lady at the supermarket is talking on the phone, don’t flare up in anger at her poor work ethic; rather, take a deep breath and imagine she had a long day and just needs an innocent diversion from a tedious job.Then, voilà, your anger dissolves into sympathy.This pretty much explains why I’m happy as a lark. Through a self-awareness regimen imposed upon me by The Wife, I’ve been able to focus on my emotions, identify what makes me angry, frustrated and annoyed. And then I make a concerted effort to stay away from everything that triggers those feelings.True, this may hurtle me down the path toward an ascetic existence, because most of those triggers are to be found in the actions of other people, but I’ll deal with that monastery when I get to it.Which brings me to Wonder Woman, the movie.“Let’s go see Wonder Woman,” The Wife suggested the other day, knowing I would probably defer, since not only do I not like comic-book-inspired action flicks, I’m also not real keen on going to the movies.Watching movies, certainly; but not going to them. Not fighting the traffic to drive into town; not hunting for a parking space; not jostling in the ticket line with obnoxious adolescents; not getting an assigned seat that – inevitably – someone will already be sitting in.And that’s the aggravation in store before the lights are even dimmed and anything is projected on the screen. Once that happens, you have to cope with the cellphones.Tell someone to stop texting, because the light of their phone is bothering you, and the movie is ruined because they obviously are not going to say, “Certainly, how very rude of me.” Don’t tell them to stop, and the movie is ruined because their phone will drive you nuts. It’s lose-lose.And, of course, there are the other banes of Israeli movie audiences: the standard loud talkers, the tell-me-what-the-subtitle- said whisperers, and the enormous-jug-of-popcorn eaters.No, I like my movies in an environment I can control – on the couch in my living room. What I may miss in audio and visual effects on a small screen, I gain with a peace of mind that I’ll never, ever find at an Israeli movie theater.But Wonder Woman with Gal Gadot is different, The Wife entreated. “It’s an Israeli actress defeating evil. You’ll want to see this one in an Israeli theater.”And she was right. There was something charmingly small-town – something downright kumsitz-like – watching with fellow Israelis this kinswoman who made it good.For the most part, Israelis relish in the success of their compatriots in the big world, at least those compatriots who don’t then use the big world stage to bash the Jewish state.This explains why there was such excitement recently when Intel bought Mobileye for $15 billion, or when Yarden Gerbi won a judo bronze medal in the Olympics last year in Rio. It’s almost a sense of, “Hey, if they can do it – and they look and sound like me – then anything is possible.”The matinee crowd at this particular screening got into the movie to a degree I haven’t experienced since The Rocky Horror Picture Show. I don’t mean just laughing at the funny lines, I mean wildly cheering when Gadot first performed her wonders; when she kissed her co-star; when she beat the bad guys.The mood in the cinema reminded me of faraway Lapland, of all places. The Wife and I, along with dozens of other Israeli tourists who did not know one another, found ourselves one evening last March on a frozen lake in northern Finland hoping to catch a glimpse of the Northern Lights.It was cold and dark, and there were folks from all over the world out there on that lake. But none of that could stifle the Israeli exuberance.Perfect strangers held lengthy and boisterous conversations in Hebrew; admonished others not to use flashes on their cameras; joked; sang; called out in loud voices to one another as though they were the only ones out there. A camp-like, youth-group atmosphere emerged from their midst.The mood at the cinema was similar.It was loud, some people were cheering, others were trying to shush them up, and people were talking nonstop. The collective chest of those in the audience seemed to puff up as we all watched an Israeli woman – who in real life is very proud and open about here Israeliness – defeat the Germans.No shades of gray in this storyline, it was black and white; as black and white as one of those New York City cookies. It was the good against the bad. And Gadot – and through her, all the Israelis in the theater – were clearly, unmistakably on the side of the good.So we clapped – for her, but, at a subconscious level, for ourselves as well. And that element of the movie – actually, the best element of the movie – I would have missed had I just waited to see it one day at home.So thanks for the experience, hevraya. Let’s do it again sometime.