The Presbyterian leadership also called on its faithful to “prayerfully study the call from Palestinian civil society for boycott, divestment and sanctions (BDS) against the State of Israel.” 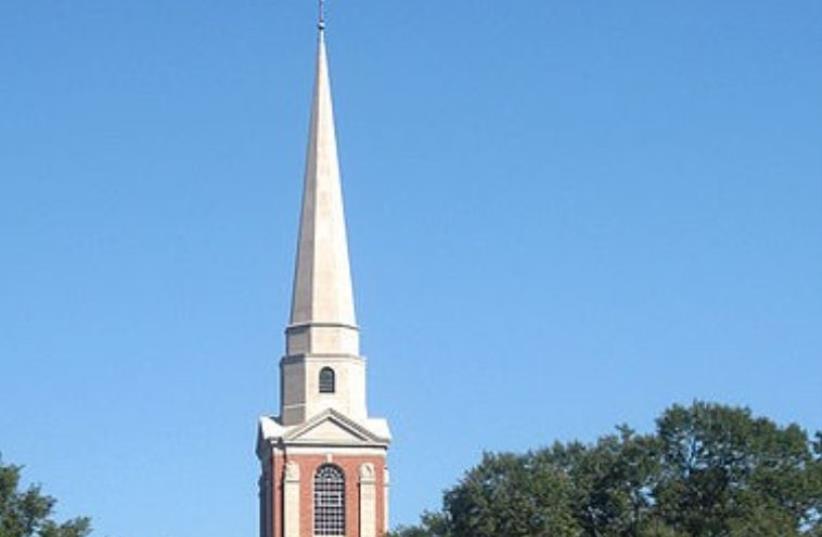 First Presbyterian Church of Houston
(photo credit: Wikimedia Commons)
Advertisement
At its biennial General Assembly in Portland, Oregon, last week, the Presbyterian Church of the US blamed “Israel’s policy trajectory of continued settlements and brutal occupation” for the stalemate in peace talks with the Palestinians, and called for pursuing alternatives to the two-state solution.The Presbyterian leadership also called on its faithful to “prayerfully study the call from Palestinian civil society for boycott, divestment and sanctions (BDS) against the State of Israel.”Unfortunately, the Presbyterians, like some other progressive movements, once again, have shown how their sincere desire to defend the weak has been exploited by organizations with rabidly anti-Zionist and even anti-American agendas. Presbyterians, one of the many Protestant denominations that have flourished thanks to the unique religious freedoms offered by America, should find their own unique moral voice instead of blindly following the lead of anti-Western progressives.Though Presbyterians have been the most aggressively anti-Israel among liberal Protestant denominations, all five of the mainline churches in the US – Methodist, Presbyterian, Episcopalian, Evangelical Lutheran and United Church of Christ –have debated, and in some cases adopted, policies that reflect a simplistic and slanted perspective on the Israeli-Palestinian conflict that sees Israel as the perpetual aggressor and the Palestinians as the helpless victim.Many buy into the liberation theology of Palestinian Protestants such as Naim Ateek, head of Sabeel, who likens Palestinians to the persecuted Jesus and views Jews – not Muslims – as the persecutors. In the process, they ignore the fact that Israel is one of the few places in the Middle East where Christians’ rights are fervently protected.A study conducted a decade ago by the Institute on Religion and Democracy found that 37 percent of the statements made by mainline Protestant churches on human rights abuses between 2000 and 2003 focused on Israel. No other country came in for such frequent criticism, though the US was a close second with 32%. China, North Korea and Saudi Arabia were not critiqued at all.In 2004, the Presbyterians were the first Protestant church to use divestment against Israel to pressure it into making concessions to the Palestinians.In 2010, the Presbyterians issued a 172-page report entitled “Breaking Down Walls” that referred to the security barrier. They called on the Obama administration to stop US aid to Israel until the Israeli government “ends the expansion of settlements in Palestinian territories,” ceases its “occupation” of Gaza and relocates the “separation barrier” to spots outside of Palestinian territories.In the same year, the United Methodist Church voted to divest all holdings in three international corporations that “profit from the occupation of Palestine.”In its previous General Assembly, the Presbyterians voted to divest from three international corporations as well.The mainline denominations stand in stark contrast to the adamantly pro-Israel position adopted by most Evangelical Protestant sects.Unlike American Evangelical theology – which has a more literal reading of the Gospel and, therefore, see the return of the Jewish people to the Land of Israel as a fulfillment of biblical prophecy – Presbyterians and other mainline denominations are more likely to contemporize the fight to establish the kingdom of God as a call to support progressive political causes.Their theology is more malleable and tends, as Walter Russell Mead once put it, to “evanesce into secularism.”They may be environmentalists belonging to the Sierra Club and Greenpeace or human rights activists involved with Amnesty International and Human Rights Watch.Interestingly, the same amorphous theology that has blurred the boundaries between mainline Protestantism and left-wing secularism also has led to a steady decline in membership. As sociologists of religion have pointed out, the more demanding and unambiguous a religion’s principles, the more respect and commitment it is likely to enjoy.Methodists and other mainline denominations would do well to reexamine their policy on Israel.Who can take seriously liberal Protestant denominations that consistently fail to make moral distinctions that set them apart from progressive secularism? Who can take them seriously when they express a blatant double standard that provides legitimacy to BDS, an anti-Semitic movement, instead of praising the only country in the region that affords religious freedom for all faiths?