If as a politician the mayor is as wise as he is known to be ambitious, and if public pressure is increased rather than relaxed, there may now be some room for optimism. 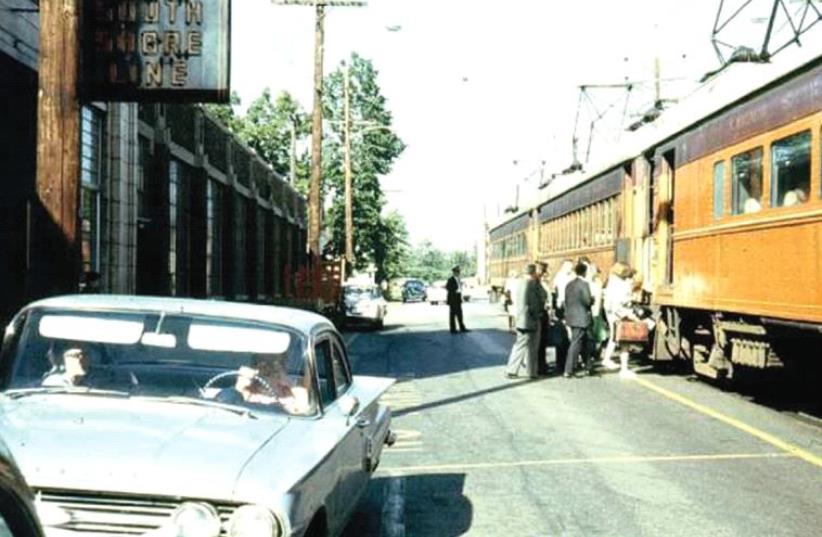 The downtown station of the Chicago South Shore and South Bend Railroad in Michigan City, Indiana
(photo credit: GEORGE KRAMBLES COLLECTION/CENTRAL ELECTRIC RAILFANS ASSOCIATION)
Advertisement
ROOM FOR OPTIMISM? Greer Fay Cashman’s commentary (“Typical for Jerusalem,” July 15) warmed the hearts of those of us who have been strongly opposing the destruction of Emek Refaim Street by the light rail’s Blue Line. But on the night of July 18 – thank goodness! – we found that she was premature in stating there seemed to be only two options for the route.At a closed meeting at Ginot Ha’ir community council on that date, “our side” offered some senior city officials four other suggestions. In my opinion, these were well thought out, brilliantly presented and, at least on the surface, very likely to be both viable and affordable.One would substitute electric buses on the Malha branch. One would retain that branch for the light rail, but make a slight kink in the proposed route, so that it would bring real benefits to Talpiot, rather than devastating harm to the German Colony. Another would run the light rail along Hamesila Park, but preserve the park by raising it above the level of the trains (examples were provided of this approach working beautifully in other major cities around the world). The last suggestion would make use of a tunnel underneath Hamesila. (A surprisingly convincing technical explanation was provided as to why this would very likely be more cost-effective than laypeople would have expected.) All these possibilities, and maybe more, were to be presented at a public meeting on July 26.On July 19, we learned that the director of Ginot Ha’ir, together with three other prominent local citizens (one of them a leading opponent of the municipality’s plan), sent a letter to Mayor Nir Barkat and other senior officials formally requesting a postponement of several months in advancing the present plan – this to allow a much more thorough examination of the issues involved for Emek Refaim. Naturally, this contributed to an enormously more constructive atmosphere than had prevailed at the public meeting on July 4.We most certainly aren’t out of the woods yet. The request for the postponement has yet to be answered, and at the meeting a senior municipal official indicated that the only alternatives the top brass are interested in hearing about now are alternative ways of making the Emek Refaim route work, not alternatives to it (As it is written, we are a stiffnecked people). Still, a combination of public pressure, common sense and problem-solving creativity have clearly brought the situation to a much healthier state than it was in just a few days ago.If as a politician the mayor is as wise as he is known to be ambitious, and if public pressure is increased rather than relaxed, there may now be some room for optimism.Martin Elton Jerusalem PERHAPS NOT Eliyahu Zazon’s article about the benefits of running the Blue Line down Emek Refaim Street (“From ghost town to valley of giants,” July 22) airily says that “inhabitants of densely populated cities around the globe are already being weaned off automobiles.” That’s great, and I’m sure my grandchildren will enjoy the greener and less polluted planet. In the meantime, the constant automobile traffic along Emek Refaim Street occurs because it is an irreplaceable route for residents of this part of the city.For instance, as soon as it is closed to traffic I’ll have to find a new dentist, since I will no longer have a reasonable way to drive from where I live in Arnona to Rehavia. I won’t be able to go back to my old dentist after the new rail line starts to operate either, since it will do absolutely nothing to solve the problem.

Naomi Sandler Jerusalem NEW BLUE LINE SOLUTIONS Eliyahu Zazon’s article claims that with the light rail along Emek Refaim, “residents will live no further than 500 meters from a station,” “10,000 riders will take advantage of the line during peak hours,” “the overall space will be cleaner, greener and more pedestrian- friendly” and “the light rail will give the street back to the people.” Ten thousand riders could be true; nothing else could be further from the truth.The German Colony is a unique area with narrow streets, historic buildings, beautiful trees and gardens. It has no wide roads suitable for mass transportation, yet the current plan includes extensive changes to widen many local, narrow side streets to cope with diverted traffic.Emek Refaim will be denuded of its magnificent old trees and flower beds. Historic buildings will be pulled down. Gardens will be shortened. All this to provide the 13-meter width needed for the light rail.Why use Emek Refaim to carry 10,000 rush-hour passengers and rush-hour traffic from Oranim Junction to the First Station via a local shopping area? Far more useful alternatives exist. The optimal connection between the First Station and Oranim is via Hatnufa and Pierre Koenig streets.In many European cities electric buses are used for mass transportation, with capacities and speeds very similar to the Jerusalem Light Rail. They need no infrastructure, run on ordinary streets and require no capital investment. They are silent, green and flexible. Their only disadvantage (for lobbyists and politicians) is that there are no fat profits for planners and engineering companies associated with creating the infrastructure. The comparison between the electric bus and the light rail is a no-brainer.Using electric buses, the Blue Line from Ramot to Gilo could be operational in six months, using Hebron Road as planned. My proposed connection via Hatnufa and Pierre Koenig would serve the shopping and industrial area of Talpiot, reduce the need for cars there and attract customers from north Jerusalem.Emek Refaim will have just one light rail station between the First Station and Oranim, replacing three bus stops. This will severely reduce accessibility to transportation for the elderly, disabled, mothers with young children, etc. The narrow pedestrian space left after 13 meters are dedicated to the light rail will make Emek Refaim a danger zone for blind people, a nightmare for wheelchairs and a nerve-racking experience for parents with young children.Rerouting the Blue Line extension through the Talpiot area could turn Emek Refaim into a joint pedestrian, local traffic and local bus route. Reducing traffic speed to say 10 kph, electronically or with road humps, would divert all through traffic to other routes. For access to the Blue Line by residents of Baka, the German Colony, the Greek Colony, Katamon, etc., small electric buses could be used along two routes: the First Station, Bethlehem Road and Yehuda Street to Oranim; and the First Station, Emek Refaim, Oranim, Elazar Hamoda’i Street, Palmah Street, Jabotinsky Street and back to the First Station.These are all low-cost, green, immediately implementable solutions that are better than the current light rail plan.Financing the Blue Line will cost billions of shekels. Can this huge amount of capital expenditure (either municipal, governmental or both) be worth investing in an inflexible, outdated transportation system? Does Finance Minister Moshe Kahlon have no better uses for taxpayers’ money? Hospitals? Schools? Let us not get to the stage where a modern- day Hamlet would look at the graveyard of the street and say: “Alas, poor Emek Refaim! I knew it, Horatio.”Jonathan Kornbluth Jerusalem The writer is an emeritus professor of operations research and ex-dean of the Jerusalem School of Business Administration of the Hebrew University.Regarding the July 15 cover story (“Emek Refaim – Railroaded?”), the plans discussed in these two articles should be scrapped because of two major faults – firstly, the discussed damage to either Hamesila Park or the fabric of Emek Refaim Street and the soul of the German Colony; and secondly and importantly, the fact that only a single- track line is planned.It will simply be impossible to provide the level of and reliability of service required with the single track on the length of either of these streets. I can speak from my experience serving as acting dispatcher for a single-track museum trolley operation, with the need to keep three fully-loaded streetcars on some sort of schedule.In the UK, the light rail lines that were built single-track have been, are, or are planned for double-track, either entirely or wherever practical, to overcome schedule reliability and capacity problems. On modern light-rail systems, single-track sections are only used in emergencies for repair conditions or for short distances, such the track through the Tower Arch in Freiburg, Germany. Single-track lines can be useful for commuter operations, where a number of trains can be fleeted from suburbs to city in the morning and back in the evening, but not an in-city transit system.There are four different solutions to both problems.

Solution 1, One-way streets: Make Emek Refaim one-way southbound and Harakevet Street one-way northbound, On each of these streets, one of the two vehicular roadways will be converted to light rail track in the same direction as the remaining roadway. Since more drivers heading southbound turn right from either road now than turn left, the eastern roadway, the existing northbound roadway, should become the new Blue Line southbound light rail track, paved for emergency vehicular use. Similar thinking makes the southbound lane of Harakevet the northbound vehicular lane, and the existing northbound lane the northbound light-rail track, again paved for emergency vehicular use.Solutions 2 and 3, Steetcars/trams here, not light rail: Either Harakevet (2) or Emek Refaim (3) can be chosen. The light rail trains will operate as streetcars/trams, with both existing lanes shared with general traffic going in the same direction. Traffic on Harakevet is light, and reliability of streetcar operation there should not be much different than light-rail operation. Noise levels can be even lower than on Jaffa Road with the most modern track construction.There are many examples of modern light rail lines using some streetcar-type operation. The one most familiar to me is the E line in Boston, in shared lanes between Brigham Circle and Heath Street, but elsewhere separate from traffic in a center reservation and in a subway. Similarly, Essex Street within the Bergen and Hudson Counties’ light rail system in New Jersey.The track through the Freiburg Tower Arch is another example. Michigan City, Indiana, has suburban trains running between South Bend and Chicago and freight trains sharing their two lanes with general traffic and obeying the same traffic signals. A similar situation exists with Amtrak intercity trains in Oakland (California), Dallas, Portland (Oregon), Philadelphia and Seattle all have modern streetcar lines in addition to light rail lines.Other North American cities have new “heritage” streetcar lines with modern streetcars constructed to resemble those of a century or half a century ago in appearance or actual historic cars modernized with today’s safety features and sometimes even air-conditioning. Examples include Tampa; San Francisco (which also has modern light rail, trolley-buses, heavy high-speed rapid transit and commuter rail); Kenosha, Wisconsin; and again Dallas; with St. Louis and El Paso, Texas, under construction.

Solution 4, Bus lanes on Hebron Road: The buses do not need to be excluded. The downtown “Bus Tunnel” subway in Seattle and Seventh Avenue, Calgary, are among other examples of transit-vehicle- only lanes shared by buses with modern light rail trains.David Lloyd KlepperJerusalem