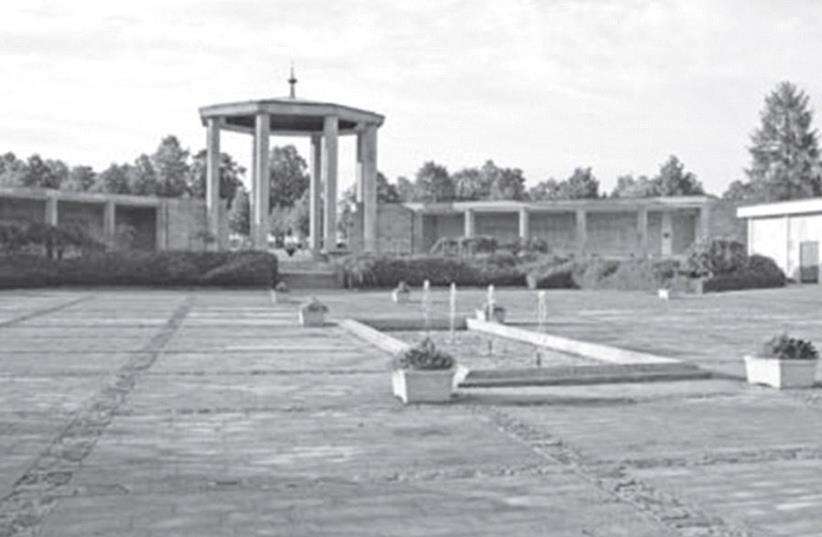 A MEMORIAL at Lidice for the Jews killed there by the Nazis.
(photo credit: WIKIMEDIA)
Advertisement
Fifteen miles from Prague is a quaint Czech town named Lidice. Seventy-five years ago this quiet, bucolic village became a symbol of Nazi brutality.Lidice became known around the globe in June 1942, but its story actually begins the instant Hitler turns Czechoslovakia into a German Protectorate in 1939.The situation got worse when Reinhard Heydrich, former head of the Gestapo, became the region’s Protector in September 1941.Known to have been cruel and ruthless, Heydrich helped conceptualize the Nazis’ death machine known as The Final Solution. That Heydrich was being groomed by Hitler to one day succeed him may help us understand Lidice’s fate.On May 27, 1942, two Czech freedom fighters attempted to assassinate Heydrich.While their mission, “Operation Anthropoid,” was not immediately successful, this brutal Nazi leader did succumb to his wounds on June 4, 1942.The aftermath of the attack on Heydrich and his subsequent death can only be labeled a bloodbath. Under orders from the highest echelons of the SS, nearly 1,500 Czechs were executed. But even this slaughter could not quell Hitler’s quest for vengeance. Seeking something more dramatic than mere executions, Hitler intended to level a town.Believed erroneously to have connections to Heydrich’s assassins, Lidice became “ground zero” for Hitler’s wrath.Before sunrise on June 10, 1942, the Nazis surrounded this peaceful village. Over 190 men were immediately rounded up and massacred without blindfolds. Within days, nearly 200 women were sent to the Ravensbruck concentration camp.Of the 105 children in Lidice, those considered to look like Aryans were deemed “suitable for Germanization” and handed over to SS families to be raised in Germany. The remaining 82 children were sent to the Chelmno extermination camp, where they were gassed in trucks on July 2, 1942.These killings, deportations and the leveling of Lidice were captured on film and publicized by the Nazis. By destroying this town, Hitler wanted to show the world the consequences of messing with the Third Reich.The world’s response to Lidice was swift and unequivocal. In England an organization “Lidice Shall Live” was established to rebuild the town one day. Towns across the world ensured that Lidice would not be forgotten by naming streets, parks and even themselves in memory of this eradicated distant village.While not directly connected to the Jewish experience during the Holocaust, Lidice intersects with the larger narrative.First, Jewish inmates of Terezin were brought in to dig the mass graves in Lidice. Second, when Heydrich died, the Nazis named The Final Solution after him: Operation Reinhard.After the war Lidice would indeed be rebuilt. Some of the widows and children returned to the new Lidice. Next to the village still exist acres of open fields. In the midst of this quiet place there is a haunting memorial sculpture by Marie Uchytilová that is made up of 82 bronze life-size statues of Lidice’s children (42 girls and 40 boys) murdered at Chelmno.Staring at these lifelike children, I felt like Franz Kafka who scolded his father for not sharing enough about the value of Judaism. I wanted to ask anyone who would listen: Why we don’t talk more about Lidice? My thoughts were suddenly interrupted by the sounds of children’s laughter.At first I thought it was coming from the monument itself. Then I realized there were children several feet away.The day we visited Lidice local kindergarten children played joyfully a stone’s throw from this moving memorial.Their teacher smiled at my guide and me, and explained that her young students love frolicking here. The ironic contrast between the memorial and these sounds of life left an indelible mark on my soul.In the year since I have visited Lidice, there have been terrorist attacks in London, Tel Aviv, Orlando, Istanbul and Paris. Sadly there are new memorials to build to victims whose lives have been extinguished swiftly, like most of Lidice’s original inhabitants.In the words of Ben Hecht, the author of Perfidy, “I write here as a man not as a Jew; but it is from the vantage point of Jewishness that I have noted and felt the decay of decency in the world.”Lidice warns us not just about the danger of unchecked evil, but also about how easy it is to forget. Lidice shall live again when we fight against evil no matter where it exists. Seventy-five years later, humanity’s campaign against evil continues.The author is a rabbi and works at Park Avenue Synagogue in New York as the director of congregational education.