Lithuania must confront its past at Kaunas march

Until now, the glorification of the Lithuanian heroes who had played a role in Holocaust crimes was only one of several themes featured at the marches. 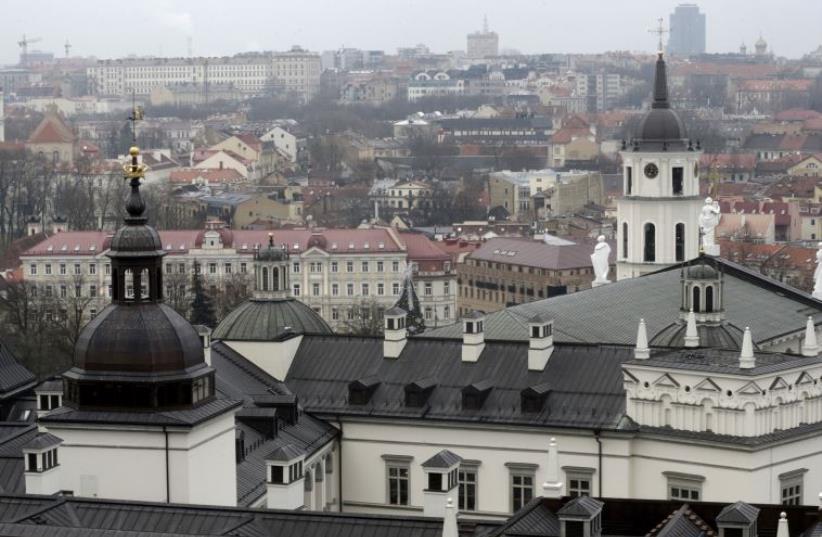 Lithuania skyline
(photo credit: REUTERS)
Advertisement
Baltic neo-Nazi/ultranationalist/ fascist march month is upon us once again. This Tuesday, February 16, the first of the marches will take place along the central avenues of Lithuania’s prewar capital of Kaunas, (Kovno) on one of the country’s two Independence Days, this one to mark the liberation from Czarist Russia in 1918. The second, on March 11, marks independence from the Soviets, and will be the date of a similar march in the current capital of Vilnius (Vilna). Both marches are sponsored by the Union of Lithuanian Nationalist Youth. The two additional marches will be taking place in Tallinn, the capital of Estonia, on February 24, Estonian Independence Day, and the last march will be held in the Latvian capital of Riga on March 16, the date of an important battle fought by the Latvian SS Legion. It is the only one of the marches which is not held to mark the achievement of independence.In Estonia, the march is being organized by Blue Awakening, the youth wing of the Estonian People’s Party, whereas the march in Riga is sponsored by SS veterans and their political supporters.This year’s march in Kaunas is of particular importance. When the marches began about a decade ago, there were blatantly anti-Semitic chants of “Juden Raus,” but in subsequent years, there were no strident, openly anti-Semitic banners or slogans. The anti-Semitic content was far more subtle, but equally problematic. It revolved around the issue of Lithuanian complicity in the Holocaust, which the nationalists persistently refuse to acknowledge.Thus, for example, at the marches I monitored during the past three years, one of the largest and most prominent banners featured the image of Juozas Ambrazevicius, the prime minister of the Provisionial Government (PG) established by the Lithuanians in early July 1941 in Kaunas. This was part of the Lithuanian efforts to reestablish their independence, which had ended with the (first) Soviet occupation of Lithuania in June 1940.The PG was very short-lived and the Germans dismantled it after about a month, since they had no intentions of restoring Lithuanian independence.During its brief existence, however, it fully supported the Third Reich and its anti-Jewish policies. In fact, even before the German invasion, the Lithuanian Activist Front (LAF), which consisted of Lithuanian political leaders who had fled to Berlin, and were the ones who established the PG, sent strongly anti-Semitic messages to the Lithuanian population and announced that the rights of residence granted to the Jews in Lithuania centuries ago were to be cancelled and called upon the population to treat the Jews very harshly.This incitement was no doubt part of the reason that Lithuanians physically attacked Jews in more than 40 locations even before the first Nazis arrived. Once the Germans had established their rule, the PG actively encouraged the persecution and murder of Lithuanian Jews, with Ambrazevicius signing on some of the anti-Semitic decrees.Until now, the glorification of the Lithuanian heroes who had played a role in Holocaust crimes was only one of several themes featured at the marches, and was not the major one. Most of the fire and brimstone were directed at the countries’ minorities (Poles, Russians and Jews), and last year at the European Union. This year, however, the major theme of the march will be “honoring the heroes that the enemies of Lithuania are trying to discredit.”The common denominator uniting the “heroes” in question is the fact that all are alleged to have participated in Holocaust crimes, and the “enemies of Lithuania” referred to are, among a few others, the authors of Musiskiai; Kelione Su Priesu (Our People; Journey With An Enemy), a brand new book on Lithuanian complicity in Holocaust crimes, which was launched exactly three weeks ago and has surprisingly taken the country by storm, with thousands of copies sold in a few days.The book has led to a very intense public debate over the role of Lithuanians in the murder of their fellow Jewish citizens, and the manner in which the authorities have tried to hide the historical facts by minimizing the crimes of local collaborators, which are attributed solely to “hooligans” and marginal elements of society, when in reality all strata of Lithuanian society participated in the crimes, and promoting the canard of equivalency between Nazi and Communist crimes, otherwise known as the “double genocide theory.”The success of the book must be attributed first and foremost to the identity of one of its authors, the very popular Lithuanian writer Ruta Vanagaite, whose discovery of the cover-up, and of the fact that two of her own relatives participated in the persecution of the Jews motivated her to tackle this very difficult and sensitive subject. Her decision to go on a mission of discovery with the author of this article to 35 sites in Lithuania and Belarus at which Lithuanians participated in the mass murder of Jews, was a courageous step, as was her readiness to write the book together with me and include our discussions and arguments regarding Lithuanian complicity in Shoa crimes, as we went from one mass murder site to another, crisscrossing the country day after day.This year’s march in Kaunas will therefore focus on one of the major historical issues confronting Lithuania. It is not clear if Lithuanian society will have the courage to finally face the truth about its Shoa history, but at least for the first time, the issues have been presented in an easily readable and digestible form for all to read, understand and internalize.Let’s hope that will eventually be the case.The author is the chief Nazi-hunter of the Simon Wiesenthal Center and director of the Center’s Israel office and Eastern European Affairs. His latest book, written together with Ruta Vanagaite, Musiskiai; Kelione Su Priesu (Our People; Journey With an Enemy) was published in Lithuania three weeks ago by Alma Littera. His websites are www.operationlastchance.org and www.wiesenthal.com. He can be followed on Twitter @EZuroff.